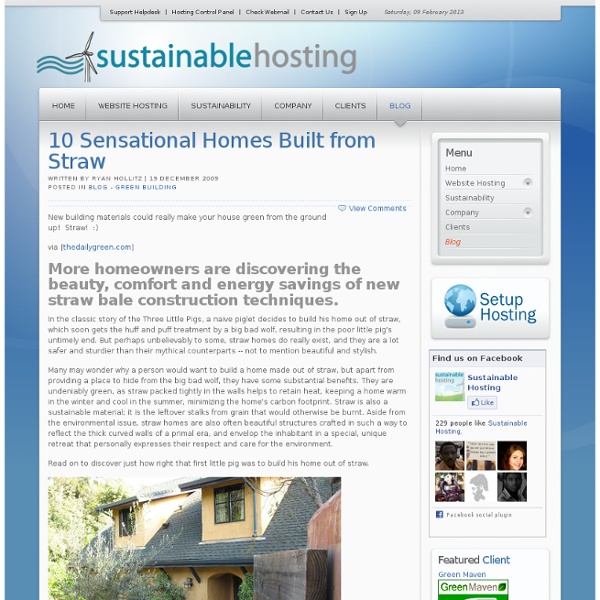 Written by Ryan Hollitz | 19 December 2009 Posted in Blog - Green Building New building materials could really make your house green from the ground up! Straw! :) via [thedailygreen.com] In the classic story of the Three Little Pigs‚ a naive piglet decides to build his home out of straw, which soon gets the huff and puff treatment by a big bad wolf, resulting in the poor little pig's untimely end. Many may wonder why a person would want to build a home made out of straw, but apart from providing a place to hide from the big bad wolf, they have some substantial benefits. Read on to discover just how right that first little pig was to build his home out of straw. Photos: Brett Weinstein/Realty Advocates 1. This unique, beautiful straw bale home in Oakland, California recently carried a $1.1 million price tag. Photo: JD Peterson 2. This gorgeous home, perched on owner Henry Siegel's 2 1/2-acre leafy lot, offers panoramic views and cozy comfort. Photo: University of Bath 3. 4. 5. 6. 7. 8. 9. Related:  Examples

» The StrawBale.com Green Building Resource Center | StrawBale.com Looking for local builders, plasterers, architects, contractors, and designers who specialize in straw bale and other natural building techniques? Search our resource center by clicking one of the links on the right or below. If you don’t find what you are looking for please click on one of the Google Ads, which are located on each page. Want to be listed in our strawbale.com Green Building Resource Center? We will give you a basic listing in the resource center absolutely freeClick here for more details. Green Building Trade and Supply Locator Straw Bale Builders or ContractorsPlasterers and plastering resources Architects or DesignersGreen building resources and suppliers Structural EngineeringInsurance State/Province Locator

A tiny straw bale home for £10,000 in Poland The tiny cottage is load-bearing straw bale house with a sleeping loft under the straw thatched roof and earthen plastered walls. It stands on a stone footing, which in turn stands on a drained gravel trench. The walls were made of tightly packed bales of straw stacked and sandwiched between hazel branches for stability. The timbers for the roof structure were taken from the local forest. Paulina teaches all over the world. Grain Bin Cabin Plan This 1 bedroom, 2 bathroom 692 sf cabin will keep you warm in winter and cool in summer. It also has the potential to provide as many as 12 "berths" for use as a hunting cabin or such. Each berth could have its indiviual heat or A/C duct for greater efficiency. The basis of the design components is to put a grain bin inside a grain bin and insulate the space between them with foam. Don't want to use foam insulation or too far from an installer? Floor Plans Mark is offering 4 hours of consulting time with the basic cost of this plan, and this can be done before you receive the plans so that it is possible to have some custom alterations made. All designs depicted are the exclusive property of Architecture By Synthesis and are copyright protected. These plans include all plans, sections, elevations, details, etc. that are appropriate for this plan package.

Der Stadtteil "Quartier Vauban" in Freiburg stellt sich vor. Student Constructs Complete Apartment of 75 ft² 552 Flares Twitter 12 Facebook 335 Reddit 1 StumbleUpon 198 LinkedIn 2 inShare2 Google+ 4 552 Flares × There’s a kitchen, bathroom, laundry room, and even a patio Since 2000, China’s cities have expanded at an average rate of 10% annually. It is estimated that China’s urban population will increase by 400 million people by 2025, when its cities will house a combined population of over one billion. That limitations can actually boost creativity is shown by the Chinese architecture student who designed this 75 ft² wooden house (23 m²) Source: Imgur, Wikipedia smart architecture, prefabricated houses china, architecture china photos (20 votes, average: 4.80 out of 5)

Footprint, The National Trust’s first straw bale building It's a beautiful and inspirational space. The low environmental impact development used local timber floors and walkways; an oak shake roof; clay and lime plasters; highly efficient glazing and sheep’s wool insulation. Hundreds of people lent a hand in its construction and hundreds more visited the building site on an organised event to learn about natural building. It was built by Amazon Nails (below left), now Straw Build (Bee Rowan) and Straw Works (Barbara Jones). The interior wall which divides the open space from a small kitchen and store is built from traditional cob on the lower courses and then less commonly with cob blocks. 5 Easy to Grow Mosquito-Repelling Plants As the outdoor season approaches, many homeowners and outdoor enthusiasts look for ways to control mosquitoes. With all the publicity about the West Nile virus, mosquito repelling products are gaining in popularity. But many commercial insect repellents contain from 5% to 25% DEET. There are new DEET-free mosquito repellents on the market today which offer some relief to those venturing outdoors in mosquito season. Here are five of the most effective mosquito repelling plants which are easy to grow in most regions of the US: 1. Citronella is the most common natural ingredient used in formulating mosquito repellents. Citronella is a perennial ‘clumping’ grass which grows to a height of 5 – 6 feet. Gardening centers usually sell citronella as small plants in pots, ready to transplant to a larger pot or into raised garden beds on the ground. When purchasing citronella, look for the true varieties, Cybopogon nardus or Citronella winterianus. 2. 3. 4. 5.

Sustainable City Development Sustainable City Development Malmö, Sweden "From industrial waste land to sustainable city" City of Malmö is highlighted by ClimateAction in partnership with United Nations Environment Programme as a city with high ambitions in sustainability. Read the full article by former Mayor Ilmar Reepalu at ClimateActions website. Malmö Innovation Platform The Malmö Innovation Platform brings together creative forces in business, academia and the community to build a joint innovation capacity in renovation of existing apartment buildings in South-East Malmö. Malmö's path towards a sustainable future The Commission for a Socially Sustainable Malmö is an independentcommission appointed by the City of Malmö to suggest objectives andactions to reduce inequities in health. Green Malmö at BBC BBC World Horizons visited Malmö and got impressed with our focus on renewable energy, smart housing and clever transport. See the video clip at Youtube » The Western Harbour — experiences and lessons learned

Earth Hands & Houses - Strawbale, earthbag and natural building courses Beautiful Strawbale Home Cost Only 5000 Euros To Build! The page this came from is not in English, but construction is a universal language, and I speak strawbale :) Here we see cool dude cutting board... Then we see what he's making... woah! And that roofing pattern is simply stunning! Soo... you think that loft will work? Lunch time... natural foods 6 Alternatives To Bullet Lists Sharebar Bullets make lists of important points easy to read. When those near-perfect little circles are vertically aligned, readers can quickly process the text. Yet too many bullet lists in an eLearning course or slide presentation can be repetitious and mind-numbing. Learners and audiences need novelty to maintain and sustain attention. The trick for going beyond bullets is to think visually. Here are six bullet alternatives you can create in any graphics program or in PowerPoint. Alternative 1: Use text boxes A simple alternative to a list is to place each item into a a text box that is arranged in a suitable layout. Alternative 2: Let icons do the talking Using the same text boxes as above, this approach adds icons to the words. These icons were found at Iconfinder. You can take this approach one step further by accentuating the graphic more than the words. These icons are courtesy of BuildInternet!. Alternative 3: Let People Speak Your List Alternative 4: Wrap the list around a picture

Skolkovo Innovation Center The logo of Skolkovo The Scheme of Work[edit] In March 2010 Vekselberg announced the necessity of developing a special legal order in Skolkovo and emphasized the need to offer a tax holiday lasting 5–7 years.[6] In April 2010 Russian President Dmitry Medvedev charged the government with working out specific legal, administrative, tax and customs regulations on Skolkovo.[7] In May 2010 Dmitry Medvedev introduced two bills regulating working conditions in Skolkovo. In August 2010 Dmitry Medvedev introduced a bill easing migratory policies in regards to Skolkovo.[11] Visa Policies for Foreign Nationals[edit] On 20 August 2010 a new government decree regulating visas for participants of the Skolkovo project was published. Transportation[edit] A new highway was opened connecting Skolkovo to the MKAD in June 2010.[13] Railway transport will be available via Belorussky Rail Terminal and Kiyevsky Rail Terminal. Financing[edit] Clusters[edit] Information Technologies[edit] Nuclear Technologies[edit]