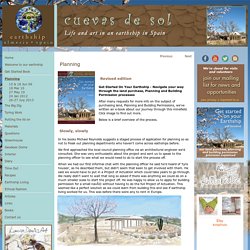 We first approached the local council planning office via an architectural engineer we'd consulted. She was very enthusiastic about the project and sent us to speak to the planning officer to see what we would need to do to start the process off. When we had our first informal chat with the planning officer he said he'd heard of 'tyre houses', as he described them, but didn't seem that keen to get involved with them. He said we would have to put in a Project of Actuation which could take years to go through. Building permission for a 'Navé' A Navé is an agricultural building in Spain. We then put in an application to build the greenhouse on the front of the hut. In our plans we'd allowed for an extra room to be added to the hut at a later date - the round room. Planning Permission Project of Ejecucion Save. Low Carbon Trust. Earthships in Spain - Welcome to our earthship home in Spain.

If you've ever dreamed of building your own eco friendly home and breaking free from the rat race we're here to inspire you. 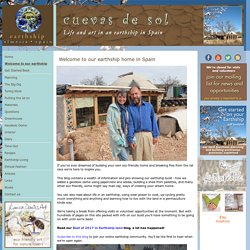 This blog contains a wealth of information and pics showing our earthship build - how we added a geodesic dome using papercrete and adobe, building a shed from pallettes, and many other eco friendly, some might say mad cap, ways of creating your dream home. Earthship Home - Young Man's Inspiring Building and Living Experience. On May 10, 2017. 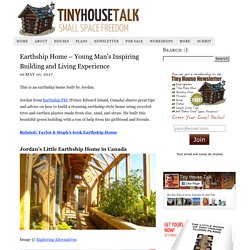 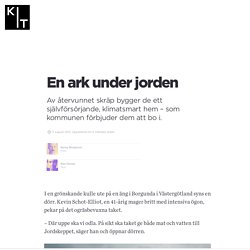 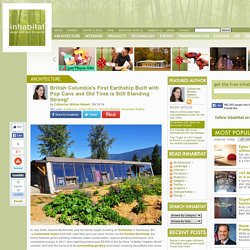 Known as the Darfield Earthship, the home features green building methods, water conservation, organic growing techniques, and renewable energy. In 2011, this inspiring project won $5,000 in the So Nice “A Better Organic World” contest, and both the home and its surrounding gardens have been evolving beautifully ever since. Family members and friends have all pitched in to help the home grow and evolve, from ramming earth into those old tires to create the foundation walls to building the greywater systems and establishing gardens all around the house. It’s amazing to see how the home has evolved from a nebulous arrangement of tires and glass pop bottles to an elegant, glass-covered, low-impact home in the mountains. 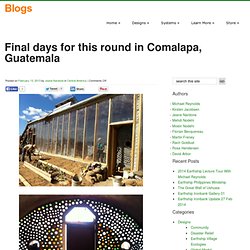 Working with Long Way Home, a non-profit organization in Comalapa working to build sustainable schools, we were able to raise the appropriate amount of money as well as gather volunteers and organize to allow this project to take place. We are thankful for all who participated and donated to this project. The 3-U Survival Pod for Romeo Apen and his family has been enclosed with power and water systems in place.

The last two days on the job site were spent finishing the plasterwork, planting and fine-tuning the systems so that Romeo can work on his own finishes unique to his liking. A final Q&A session was held by Phil Basehart, the project director, which included all of our volunteers as well as the crew of Long Way Home who with the help of a volunteer translator, were able to ask about the building and the principles of Earthships. Simple Survival Earthship Design. Simple Survival Earthship Design by Michael Reynolds. 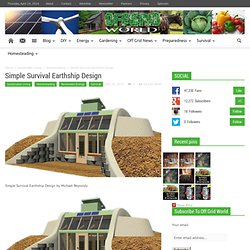 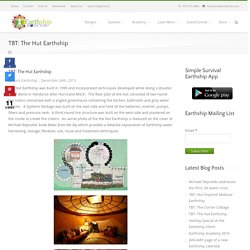 The floor plan of the Hut consisted of two round tire rooms connected with a angled greenhouse containing the kitchen, bathroom and grey water planter. A Systems Package was built on the east side and held all the batteries, inverter, pumps, filters and pressure tank. A third round tire structure was built on the west side and plastered on the inside to create the cistern. An aerial photo of the the Hut Earthship is featured on the cover of Michael Reynolds’ book Water from the Sky which provides a detailed explanation of Earthship water harvesting, storage, filtration, use, reuse and treatment techniques. Related. Grand Designs - The Underground House - Cumbria.

10m² Micro Earthship - Living Big in a Tiny House. After watching the film Garbage Warrior, kiwi couple Nathan Rushton and Jess Fitzgerald were so inspired by Earthships that they actually travelled to New Mexico to study Earthship Biotecture with pioneering architect Michael Reynolds. 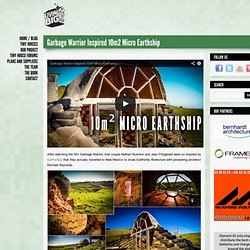 After returning to New Zealand and finding an ideal location, the couple then began the process of designing and building a downsized version of an Earthship at their property in Raglan. Despite its small size of only 10 square meters, this Earthship will meet all the necessary design principles including thermal / solar Heating, solar & wind electricity, contained sewage treatment, building with natural & recycled materials, water harvesting and food production. The first phase of construction was completed in record time, from locally found materials and with the help of a small army of volunteers including friends, family and a number of Earthship enthusiasts from around New Zealand. Simple Survival Earthship. Earthship - The Phoenix.