Web 2.0 in the classroom by Ryan McCallum on Prezi 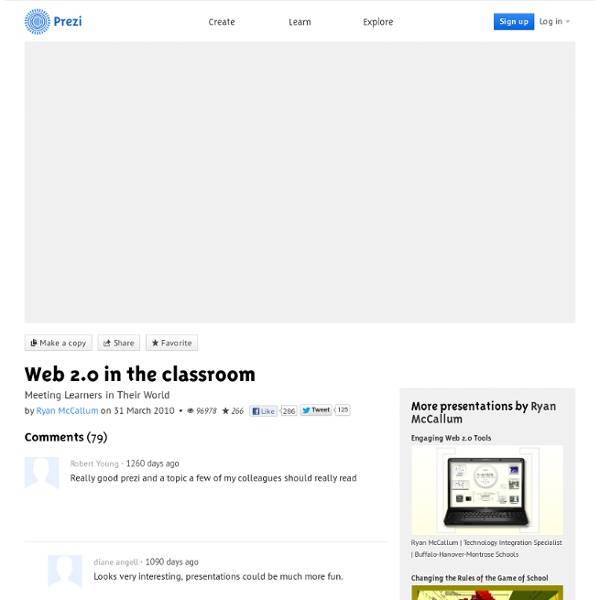 CogDogRoo » StoryTools 50 Web 2.0 Ways to Tell a Story (return) Note! 50+ Ways is no longer being updated here but over at the new site for 50+ Web 2.0 Ways to Tell a Story-- It has more organizational features and includes ways for you to add content to the site once you join the new wiki. Below you will find 50+ web tools you can use to create your own web-based story. Slideshow Tools Generates content that allows linear playback of a series of images, some with ability to add audio. 2. Upload images from computer or flickr or upload PowerPoint files. 3. "...effortlessly combine photos and video clips with words and music to personalize your story. 4. "RockYou! 5. "Slide lets you use photos and other digital content to publish and discover the people and things that matter to you." 6. 8. Creates horizontal slide shows from flickr sets ) no text or audio.

Three language lessons you can learn from the word “schlemiel” In honor of National Poetry Month, let’s tackle some of the trickiest aspects of meaning — after all, poetry is one of the great ways to express subtle and slippery thoughts. Our focus today is translation. How can someone convey the meaning of a word that has no equivalent in another language? Among the toughest words to translate, and there are some doozies, schlemiel is a top contender. It is a Yiddish word for a chronically unlucky person. The trouble behind “schlemiel” presents us with a common translation problem – the translator will inherently run into words in one language that may not have an equivalent word in the other language. (Curious to learn some of the toughest words to convey in English, like prozvonit and hyggelig? Here are three tools that the skilled translator keeps at hand when faced with an untranslatable word. When confronted with a lacuna (a gap in a piece of writing), a translator may resort to free translation or adaptation. Dr. Mrs. Anonymous

10 Tips to Help Master Prezi Last week, I spent two days teaching Prezi at the Langley Center for New Media. As the event came to a close, a few attendees asked if I could sum up more than 16 hours of teaching in a top 10 list. Well, here’s my first stab at 10 tips that should help you become a better Prezi presenter and publisher. 1. Work in 1024 × 768 Import assets (like screenshots) at the resolution you plan to present at, otherwise your imported assets will look awful. 2. While we’re talking about the correct presentation resolution, it’s important to remember that Prezi is designed to help you easily present at 1024 × 768. 3. Working efficiently in Prezi, like many software suites, completely hinges on using the keyboard shortcuts. 4. When I set out to create a presentation, I think in 10-minute frames. 5. While I’m constructing my presentation (constantly adding elements and trying to work through the story and element organization), I work across a widely separated landscape. 6. 7. 8. 9. 10. 100 more hints

17 Examples of Great Presentation Design We can all agree that, in most cases, there's more than one way of doing something. For example, some people default to the "loop, swoop, and pull" method when they tie their shoes, while others swear by the "bunny ears" technique. Either way you swing it, your shoes get tied, right? Trouble is, in some areas of life, different approaches don't always return the same results. When it comes to presentation design, for instance, there's no shortage of avenues you can take. Download the full collection of PowerPoint presentation design examples here. We're not saying there's one right way to design your next PowerPoint presentation, but we are saying that some designs make more sense than others. 1) "The Search for Meaning in B2B Marketing," Velocity Partners We've said it once, and we'll say it again: We love this presentation from Velocity Partner's Co-Founder Doug Kessler. 2) "You Don't Suck at PowerPoint," Jesse Desjardins Balancing visual backgrounds with text isn't easy.

EarthrootsFieldSchool.org | Cultivating a sense of care & connection with the natural world. The how to make a great Prezi, Prezi by Ned Potter on Prezi UNESCO ASPNet The UNESCO Associated Schools Project Network, or ASPNet for short, is a program established in 1953 to encourage schools worldwide to educate students on issues related to UNESCO's "overarching goal of promoting peace and international understanding". As of 2008[update], it includes nearly eight thousand educational institutions in over 170 countries. ASPnet schools conduct their own projects, often linking with schools from other countries, or may become involved in a UNESCO-coordinated activity, such as the "World Heritage in Young Hands" project. A national coordinator, typically housed at the National Commission, serves as the liaison between the schools and UNESCO.[1] References[edit] External links[edit] Official website

A Model Of Excellence For Kids And Teens | Everything Counts! If you're new here, you may want to subscribe to my RSS feed. Thanks for visiting! Bobbi Deporter Imagine a camp where kids and teens learn to become exceptional human beings. This sound likes a really super camp doesn’t it? In 1982, Bobbi broke the mold by creating a learning and life skills academic summer program for youth. Just as Southwest Airlines changed our perceptions of flying and Starbucks changed our perceptions of coffee shops — SuperCamp has throw away the rule book and created an innovative category in engaged, joyful, successful learning. Here’s a note from a SuperCamp Graduate: “I have been a SuperCamper for two years. Bobbi DePorter has changed the lives of over four million kids around the world. You Are -- A to E The success of SuperCamp led Bobbi to create Quantum Learning school programs for educators and students. What impresses me most about Bobbi and the SuperCamp curriculum is their focus on excellence as a critical life skill.

Garrison "Arrival of the dean fleet", showing the garrison of Malta in 1565 and the Ottoman invasion force. Garrison (various spellings) (from the French garnison, itself from the verb garnir, "to equip") is the collective term for a body of troops stationed in a particular location, originally to guard it, but now often simply using it as a home base. The garrison is usually in a city, town, fort, castle or similar. "Garrison town" is a common expression for any town that has a military base nearby. Arab garrison "Garrison towns" (Arabic: حصون ‎) were used during the Arab Islamic conquests of Middle Eastern lands by Arab-Muslim armies to increase their dominance over indigenous populations.[1] In order to occupy non-Arab, non-Islamic areas, nomadic Arab tribesmen were taken from the desert by the ruling Arab elite, conscripted into Islamic armies, and settled into garrison towns as well as given a share in the spoils of war. British and Irish garrison Israeli garrison Ancient Rome garrison

Academic skepticism Academic skepticism refers to the skeptical period of ancient Platonism dating from around 266 BC, when Arcesilaus became head of the Platonic Academy, until around 90 BC, when Antiochus of Ascalon rejected skepticism. Like their fellow Pyrrhonists, they maintained that knowledge of things is impossible. Ideas or notions are never true; nevertheless, there are degrees of probability, and hence degrees of belief, which allow one to act. The school was characterized by its attacks on the Stoics and on their belief in convincing impressions which lead to true knowledge. The most important Academic skeptics were Arcesilaus, Carneades, and Philo of Larissa. Overview[edit] Greek skepticism, as a distinct school, began with Pyrrho of Elis (c. 360 BC-c. 270 BC), about whom very little is known. Around 266 BC, Arcesilaus became head of the Platonic Academy, and adopted skepticism as a central tenet of Platonism. Arcesilaus[edit] Carneades[edit] Philo of Larissa[edit] References[edit]