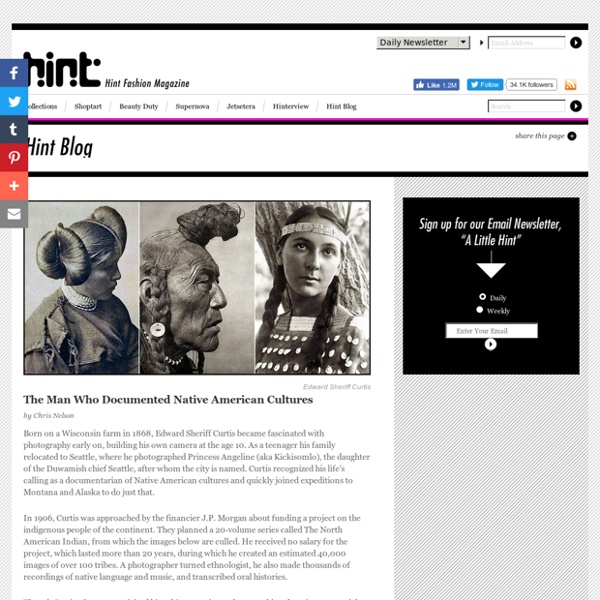 Edward Sheriff Curtis The Man Who Documented Native American Cultures by Chris Nelson Born on a Wisconsin farm in 1868, Edward Sheriff Curtis became fascinated with photography early on, building his own camera at the age 10. As a teenager his family relocated to Seattle, where he photographed Princess Angeline (aka Kickisomlo), the daughter of the Duwamish chief Seattle, after whom the city is named. Curtis recognized his life's calling as a documentarian of Native American cultures and quickly joined expeditions to Montana and Alaska to do just that. In 1906, Curtis was approached by the financier J.P. Though Curtis often romanticized his subjects, at times photographing them in ceremonial attire not regularly worn and wigs to conceal contemporary hair styles, he was an outspoken opponent of the devastating use of relocation and reservations. Apsaroke, 1908 Sioux, 1907 Apache, 1910 Tewa, 1906 Cheyenne, circa 1900 Siksika, circa 1910 Arikara, 1907 Wishham, 1911 Jicarilla, 1904 Hopi, circa 1900

Related:  First North Americans • Teach/ Ideas • How to be human- Examples • Cultures - other humans • Anthropology - Looks beneath the surface

Black Elk Heȟáka Sápa (Black Elk) (December 1, 1863 – August 19, 1950)[1] was a famous wičháša wakȟáŋ (medicine man and holy man) and heyoka of the Oglala Lakota (Sioux) who lived in the present-day United States, primarily South Dakota. He was a second cousin of the war leader Crazy Horse. Near the end of his life, Black Elk met with amateur ethnologist John Neihardt and recounted to him his religious vision, events from his life, and details of Lakota culture.

This 9-Year-Old Russian Boy ‘Sells’ His Custom Pet Paintings For Food And Supplies For Shelter Animals Not all heroes wear capes but their good deeds speak for themselves. This is yet another story to prove that even the smallest of us are capable of changing the world for the better and restore the faith in younger generations. Children come up with the most brilliant ways to solve problems that adults often fail at. How to combine a love for art and help for stray animals? A kind-hearted 9-year-old Russian boy Pavel Abramov has the perfect answer to this question. The young artist from a small city of Arzamas in Nizhny Novgorod has been painting beautiful portraits of pets and not to make money for his toys or a new phone, as you would expect.

After 9 Months Of Competition And More Than 130,000 Submissions, Here Are The Most Breathtaking Pics Taken This Year (50 Pics) After 9 months of competition and more than 130,000 submissions from photographers all over the world, the Top 50 finalists for the #AGORAawards2019 have been revealed. From seals resting on the Antarctic ice to Nomads crossing the Sahara desert, this selection will make you travel across the continents to discover the wonders of Planet Earth and its various cultures, people and incredible landscapes. The AGORA Awards 2019, hosted by free-to-use photography app AGORA images will reward the best image of the year with the grand prize of $25,000 for its photographer. Unlike any other contest, the third edition of the AGORA Awards recognizes the single most voted photo of the year, without any photography genre categories. The competition has been running throughout 2019, where photographers from all around the world - amateurs and professional alike - could submit their best shots.

Buddhism: 11 Common Misunderstandings and Mistakes People believe many things about Buddhism that simply are incorrect. They think Buddhists want to get enlightened so they can be blissed out all the time. If something bad happens to you, it's because of something you did in a past life. Black Elk Speaks Black Elk Speaks is a 1932 book by John G. Neihardt, an American poet and writer, who relates the story of Black Elk, an Oglala Lakota medicine man. Black Elk spoke in Lakota and Black Elk's son, Ben Black Elk, who was present during the talks, translated his father's words into English.[1] Neihardt made notes during these talks which he later used as the basis for his book.[2] The prominent psychologist Carl Jung read the book in the 1930s and urged its translation into German; in 1955, it was published as Ich rufe mein Volk (I Call My People).[3] Reprinted in the US in 1961, with a 1988 edition named Black Elk Speaks: Being the Life Story of a Holy Man of the Oglala Sioux, as told through John G.

2nd Grade Students Cover Their Teacher’s Dress In Drawings, And Her Story Takes Over The Internet Sometimes arming a bunch of 8-year-olds with paint and markers doesn’t have to result in a disaster. In fact, it can turn into a beautiful work of art! This is exactly what happened to Haley Curfman, a 2nd-grade teacher in Blackwell, Oklahoma. Haley bought a beautiful white dress, set it up in her classroom and encouraged her students to draw on it. The only rule she had – children were not allowed to cross out anything. The result was so amazing it went viral. Indigenous Runner Rosalie Fish Runs For Her People Rosalie Fish is an enrolled member of the Cowlitz Tribe of southwest Washington. She started running when she was a student at a public middle school in south Seattle. She liked staying in shape, hanging out with her friends, improving her times. Then, in 2015, she transferred to the Muckleshoot Tribal School, on a reservation south of Seattle. That’s when running started to take on a new meaning.

Muslims lived in America before Protestantism even existed The first words to pass between Europeans and Americans (one-sided and confusing as they must have been) were in the sacred language of Islam. Christopher Columbus had hoped to sail to Asia and had prepared to communicate at its great courts in one of the major languages of Eurasian commerce. So when Columbus’s interpreter, a Spanish Jew, spoke to the Taíno of Hispaniola, he did so in Arabic. Not just the language of Islam, but the religion itself likely arrived in America in 1492, more than 20 years before Martin Luther nailed his theses to the door, igniting the Protestant reformation. Moors – African and Arab Muslims – had conquered much of the Iberian peninsula in 711, establishing a Muslim culture that lasted nearly eight centuries.

Recent discoveries fundamentally change our picture of human evolution - Business Insider As anthropologists have discovered new species of human ancestors, our understanding of human history has changed. By sequencing the genomes from our Neanderthal and Denisovan cousins, scientists have also gained new insight into the genetic origins of our species. As researchers make more of these breakthroughs, the puzzle of who we are and where we came from gets more complicated.The earliest humans may have emerged much earlier, and in a different place in the world, than scientists previously thought.Visit Business Insider's homepage for more stories. In recent years, anthropologists around the world have discovered new human ancestors, figured out what happened to the Neanderthals, and pushed back the age of the earliest member of our species. Taken together, these breakthroughs suggest that many of our previous ideas about the human origin story — who we are and where we came from — were wrong.

El Norte review: an epic and timely history of Hispanic North America The subtitle of Carrie Gibson’s book is The Epic and Forgotten Story of Hispanic North America. El Norte lives up to it. These 437 pages are an important correction to centuries of American history which have mostly neglected the vital role of Spanish pioneers (and Native Americans) in favor of settlers from England, Ireland and Scotland. As the author quotes Walt Whitman, Americans long ago tacitly abandoned themselves “to the notion that our United States have been fashioned from the British Islands … which is a great mistake …

Smile! Could the pandemic lead to happier times? In January 2018, a Yale University professor named Laurie Santos launched a course, Psychology and the Good Life, which quickly became the most popular class in the institution’s 319-year-history. After 13 years at Yale, in 2016, the 44-year-old had taken charge of one of the university’s residential colleges and had become alarmed by widespread mental illness and stress. She wanted to explain the paradox of why so many students were still suffering, having achieved their dreams of being admitted to Yale and having met society’s definition of success.

Muslims Raise $60K For Pittsburgh Synagogue Victims Updated, 4:15 p.m. A crowdfunding campaign formed by two Muslim groups has raised more than $60,000 for the victims of the Pittsburgh synagogue shooting, which killed 11, the Independent reported. Muslim-American non-profits Celebrate Mercy and MPower Change were behind the campaign, “Muslims Unite For Pittsburgh Synagogue.” It is also in partnership with the Islamic Center of Pittsburgh. The campaign reached its initial goal of $25,000 goal in six hours. As of press time, it raised $62,500 of its new $75,000 goal.