Dallas Symphony Orchestra: Timpani. Percussion With a name that means, "the hitting of one body against another," instruments in the percussion family are played by being struck, shaken, or scraped. 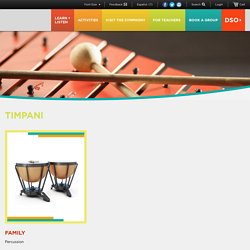 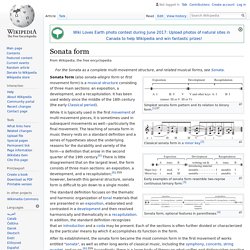 It has been used widely since the middle of the 18th century (the early Classical period). After its establishment, the sonata form became the most common form in the first movement of works entitled "sonata", as well as other long works of classical music, including the symphony, concerto, string quartet, and so on.[6]:359 Accordingly, there is a large body of theory on what unifies and distinguishes practice in the sonata form, both within eras and between eras. Madrigal: Definition & History. What is a... Motet? A sacred choral piece, usually unaccompanied, in several parts – that’s about as close as one can get to a definition of ‘motet’ without excluding whole swathes of repertoire. 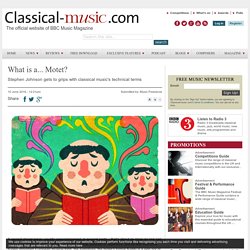 But as with that other hugely important European musical form, the symphony, the motet’s formal fluidity is a sign not of inherent vagueness, but of strength and health – the ability to survive and thrive in times of huge cultural shifts. In essence, the medieval motet represents the first great flowering of that distinctly Western innovation, polyphony.

Chorale prelude - Wikipedia. Autograph manuscript of the chorale prelude Wie schön leuchtet der Morgenstern, BWV 739, 1705 Function[edit] Style[edit] Although it was typically a polyphonic setting, the chorale would be plainly audible. 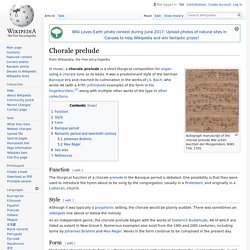 The Classical Choral prelude Information Page on Classic Cat. In music, a chorale prelude is a short liturgical composition for organ using a chorale tune as its basis. 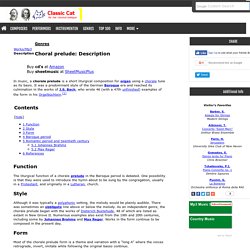 It was a predominant style of the German Baroque era and reached its culmination in the works of J.S. Bach, who wrote 46 (with a 47th unfinished) examples of the form in his Orgelbüchlein.[1] Function. Concerto grosso. The Fugue: Bach, Definition & Examples. Music Theory Academy, Music Theory Lessons, How to rea... Theme and variations is a very common musical structure you will come across, especially in classical music. 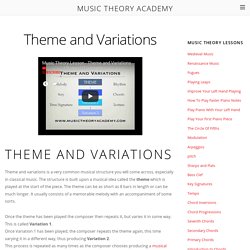 The structure is built upon a musical idea called the theme which is played at the start of the piece. The theme can be as short as 8 bars in length or can be much longer. It usually consists of a memorable melody with an accompaniment of some sorts. Once the theme has been played the composer then repeats it, but varies it in some way. This is called Variation 1. Chaconne - Wikipedia. History[edit] Though it originally emerged during the late sixteenth century in Spanish culture, having reputedly been introduced from the New World, as a quick dance-song characterized by suggestive movements and mocking texts,[2] by the early eighteenth century the chaconne had evolved into a slow triple meter instrumental form. 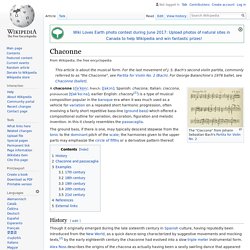 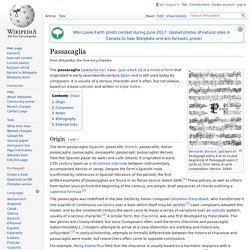 It is usually of a serious character and is often, but not always, based on a bass-ostinato and written in triple metre. Origin[edit] Article about Basso Ostinato by The Free Dictionary. Also found in: Dictionary, Thesaurus. 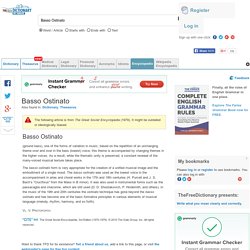 The following article is from The Great Soviet Encyclopedia (1979). It might be outdated or ideologically biased. (ground bass), one of the forms of variation in music, based on the repetition of an unchanging theme over and over in the bass (lowest) voice; this theme is accompanied by changing themes in the higher voices. As a result, while the thematic unity is preserved, a constant renewal of the many-voiced musical texture takes place. The basso ostinato form is very appropriate for the creation of a unified musical image and the embodiment of a single mood. Ternary form.

Ternary Form is a form used to structure compositions. 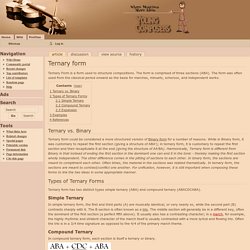 The form is comprised of three sections (ABA). The form was often used from the classical period onward as the basis for marches, minuets, scherzos, and independent works. Ternary vs. Binary Ternary form could be considered a more structured version of Binary form for a number of reasons. Music Theory Academy, Music Theory Lessons, How to read sheet m... Binary Form describes the structure of a piece of music which is divided into 2 different sections. The 2 sections are usually labelled A and B. The key concept to grasp is that there is some sort of contrast between the A section and the B section. This contrast is usually (though not always) created by a key change. What is Melismatic Singing? Polyphonic texture example. Polyphonic - definition of polyphonic in English. Adjective 1Producing or involving many sounds or voices. ‘a 64-voice polyphonic sound module’ figurative ‘dialogue is a staple of all polyphonic novels’ ‘Sound quality is also excellent, with a three-voice polyphonic speaker, so the supplied ringtones sound great.’

Why Does Schoenberg Sound Like That? The POLYTONAL Linkin Park (perceptions of polytonality) Fauxbourdon. Descant. Evolving Chant into Organum to Florid Organum. Chord (music) - Wikipedia. Mussorgsky's Pictures at an Exhibition "Promenade", is a piece showing an explicit chord progression. (Nattiez 1990, p. 218) Play C Major triad represented in staff notation. Music Theory 103: Rhythm - 10 Syncopation. OnMusic Dictionary - Term. The speed of the rhythm of a composition. Tempo is measured according to beats per minute. A very fast tempo, prestissimo, has between 200 and 208 beats per minute, presto has 168 to 200 beats per minute, allegro has between 120 and 168 beats per minute, moderato has 108 to 120 beats per minute, andante has 76 to 108, adagio has 66 to 76, larghetto has 60 to 66, and largo, the slowest tempo, has 40 to 60.