Staying Alive - 4 minutes to save a life in 3D 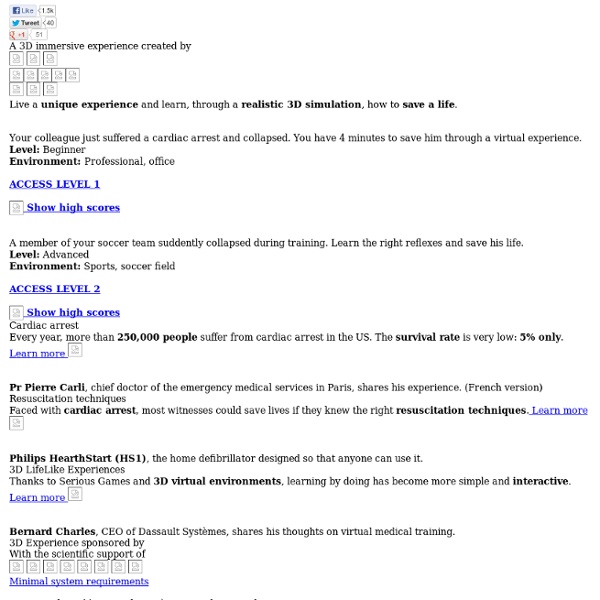 SpaceChem Food Force URGENT: Syrian children and their families need your help The crisis in Syria is entering a sixth brutal year. For Syrian families, this somber anniversary means another year away from home, another day not knowing where their next meal will come from, and another night that children will go to bed with empty stomachs. Make A Donation WFP is 100% voluntarily funded, so every donation counts. 90% of every donation goes directly towards getting food to hungry children and their families -- meaning you can make an incredible impact. Join Our Online Community Be a part of the World Food Programme's Online Community where we all have one goal in common -- ending hunger. Our Work Together Changes Lives Read how the World Food Programme is building a world with zero hunger, thanks to supporters like you.

FORESTIA – A Simulation Game on Sustainable Forest Management Did you know? Boreal forests have their own integrated cooling system! They emit particles that thicken clouds, thus making the ground cooler. Earn neurons by answering science quizzes. Welcome to the island of FORESTIA, world of a thousand forest mysteries. FORESTIA is an island of the GAME FOR SCIENCE virtual world, where you will meet Kalikasan, a very unusual naturalist. You will also find the simulation and strategy game FORESTIA. The island of FORESTIA conceals other secrets that will be gradually revealed by the naturalist through mini-games, video clips, and document files. GAME FOR SCIENCE launches a virtual forest With a new simulation and strategy game from CREO, young people can now experience the inherent challenges of sustainable forest management. Directly accessible free of charge on-line at ( the game can also be accessed through GAME FOR SCIENCE ( a science-themed virtual world and education portal.

NationStates | create your own country Prisoner's dilemma The prisoners' dilemma is a canonical example of a game analyzed in game theory that shows why two individuals might not cooperate, even if it appears that it is in their best interests to do so. It was originally framed by Merrill Flood and Melvin Dresher working at RAND in 1950. Albert W. Tucker formalized the game with prison sentence rewards and gave it the name "prisoner's dilemma" (Poundstone, 1992), presenting it as follows: Two members of a criminal gang are arrested and imprisoned. It's implied that the prisoners will have no opportunity to reward or punish their partner other than the prison sentences they get, and that their decision won't affect their reputation in future. There is also an extended "iterative" version of the game, where the classic game is played over and over between the same prisoners, and consequently, both prisoners continuously have an opportunity to penalize the other for previous decisions. Strategy for the classic prisoners' dilemma[edit] Nice