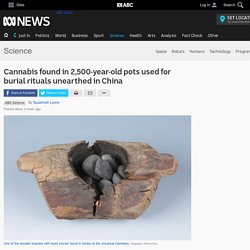 Key points Archaeologists have found traces of cannabis in wooden pots exhumed from tombs in western ChinaThe find provides the strongest and earliest evidence to date, of cannabis being smoked for its psychoactive propertiesIt appears cannabis was an important part of ancient burial rites But before you imagine ancient stoners passing around a primitive bong, the reality was probably quite different, archaeologists report in the journal Science Advances today.

Ghost marriages: A 3,000-year-old tradition of wedding the dead is still thriving in rural China. Posted Media player: "Space" to play, "M" to mute, "left" and "right" to seek. 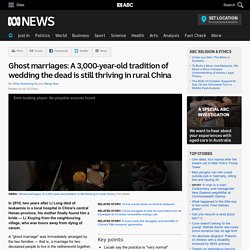 Error loading player: No playable sources found Video: Ghost marriages: A 3,000-year-old tradition is still thriving in rural China (The World) In 2010, two years after Li Long died of leukaemia in a local hospital in China's central Henan province, his mother finally found him a bride — Li Xiuying from the neighbouring village, who was hours away from dying of cancer. Key points: Locals say the practice is "very normal"Parents now buy "brides" for their sons off a black market of female corpsesThere have been at 12 murder cases linked to ghost marriages. Silk Road. Silk Road The Silk Road, or Silk Route, is a series of trade and cultural transmission routes that were central to cultural interaction through regions of the Asian continent connecting the West and East by linking traders, merchants, pilgrims, monks, soldiers, nomads, and urban dwellers from China and India to the Mediterranean Sea during various periods of time. 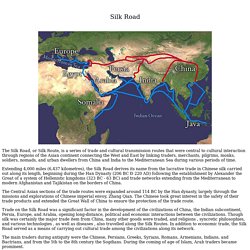 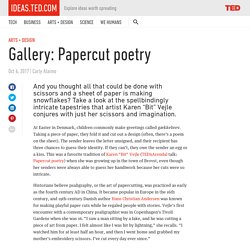 Taking a piece of paper, they fold it and cut out a design (often, there’s a poem on the sheet). The sender leaves the letter unsigned, and their recipient has three chances to guess their identity. If they can’t, they owe the sender an egg or a kiss. This was a favorite tradition of Karen “Bit” Vejle (TEDxArendal talk: Papercut poetry) when she was growing up in the town of Brovst, even though her senders were always able to guess her handiwork because her cuts were so intricate. 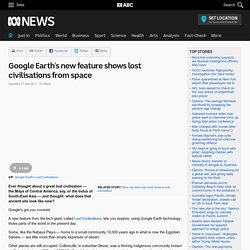 Google's got you covered. Japan's ancient art of bonsai threatened by waning interest among youth. Posted Media player: "Space" to play, "M" to mute, "left" and "right" to seek. 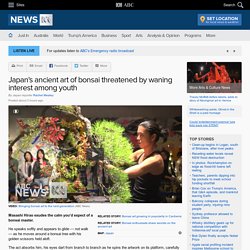 Video: Bringing bonsai art to the next generation (ABC News) Masashi Hirao exudes the calm you'd expect of a bonsai master. He speaks softly and appears to glide — not walk — as he moves around a bonsai tree with his golden scissors held aloft. The act absorbs him, his eyes dart from branch to branch as he spins the artwork on its platform, carefully inspecting it from every angle. Khanacademy. Paperhood: Ancient Chinese art form meets Melbourne street scene. Posted In China, the ancient art of paper cutting is seen as high culture but a new project aims to bring it to the masses in Australia. 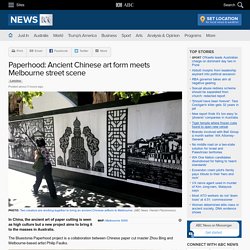 The Bluestonia Paperhood project is a collaboration between Chinese paper cut master Zhou Bing and Melbourne-based artist Philip Faulks. "I hope Philip and I can learn from each other and Chinese traditional art can have some fusion with western street art," Zhou told Lateline. Zhou's paper cuts are reinterpreted as posters alongside Faulks's paintings, and pasted around the streets of Melbourne. 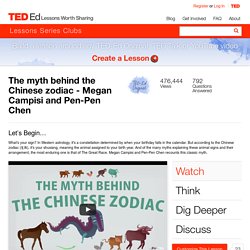 Called the Spring Festival 春节 (Chun Jie) as it marks the first day of spring on the lunar calendar, the holiday is typically a time to spend with family and feast on celebratory foods. Children will often receive lucky money in red envelopes “红包” (hong bao) from their parents, grandparents, and other adult relatives. While China adopted the Western calendar that marks the New Year on January 1 in 1912, the Spring Festival is still celebrated according to the traditional lunar calendar, which is thought to have been used from at least the 14th century B.C.E. This website explains a little more. The Spring Festival lasts fifteen days and is filled with different activities. Funerary Customs. Who Built the Great Wall of China, When and Why. It's well known that "Emperor Qin built the Great Wall". 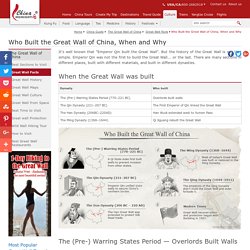 But the history of the Great Wall is not that simple. Emperor Qin was not the first to build the Great Wall... or the last. There are many sections in different places, built with different materials, and built in different dynasties. ShaoLan: The Chinese zodiac, explained. Have you ever been asked by your Chinese friend,"What is your zodiac sign? 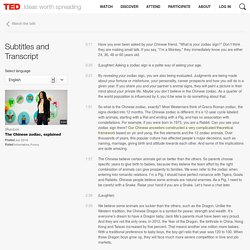 "Don't think they are making small talk.If you say, "I'm a Monkey,"they immediately knowyou are either 24, 36, 48 or 60 years old. (Laughter)Asking a zodiac sign is a polite way of asking your age. By revealing your zodiac sign, you are also being evaluated.Judgments are being made about your fortune or misfortune,your personality, career prospectsand how you will do in a given year.If you share you and your partner's animal signs,they will paint a picture in their mind about your private life.Maybe you don't believe in the Chinese zodiac.As a quarter of the world population is influenced by it,you'd be wise to do something about that. China's Maps - ancient Chinese History.

Famous Historic Buildings & Archaeological Sitesin China – Great Wall, Forbidden City, Temple of Heaven, Terracotta Warriors/Army, Potala Palace, Lhas. China Great Wall of China The Great Wall of China is a series of stone and earthen fortifications built by a number of emperors to protect the northern borders against nomadic tribes. At one time the wall stretched from Shanhaiguan on China's east coast through a variety of terrains including mountains, plateaus and desert to Lop Nur in the North West of the country. Today a lot of that wall has disappeared but parts are still being rediscovered, its current length is approximately 4,500 miles. READ MORE Beijing Forbidden City. The Pyramids of China - Discovery and Area Five Xi'an Region 2. Secret Chinese Pyramids Evidence of Alien Visitors? According to the old Chinese legend, over one hundred pyramids built in China are evidence of visits paid by aliens to our planet.

Ancient Chinese Philosophy. Chinese philosophy is the intellectual tradition of the Chinese culture from their early recorded history to the present day. The main philosophical topics of Chinese philosophy were heavily influenced by the ideas of important figures like Laozi, Confucius, Mencius and Mozi, who all lived during the second half of the Zhou dynasty (8th to 3rd century BCE). Chinese culture as a whole has been shaped by the influence of these intellectual leaders. main Attributes. Chinese Folk Papercut, How Make Chinese Papercut. The History and the Heritage Ever since paper was invented in 105 A.D. by Ts’ai Lun, an official in the court of Ho Ti, emperor of Cathay, paper-cutting has been a folk art.

Perhaps it flowered because paper became so inexpensive and universally available, so easily workable with ordinary tools, and so adaptable to manifold uses. Whatever the reason, it was the common folk who first learned to cut the paper, and then perpetuated these rich traditions. The humble nature of its origins and the anonymity of its practice have caused paper-cutting to remain virtually ignored as an art form. Certainly most paper cut work was never so much as attributed, much less signed. How To Make Chinese Paper Cuts. Chinese Paper Cutting, Popular for Its Low Cost and Artistry. Introduction Paper cuttings Paper cutting is one of the most popular decorative Chinese handicrafts. It is popular for its low cost and artistry. Rural women often make paper cuttings in their spare time when farming is not busy.