Beijing deploys maritime surveillance vessels to the waters off Hawaii｜WantChinaTimes.com. Wang Jin sits on the right of Yang Yujun, the spokesperson of the PLA at a press conference. 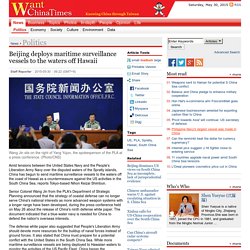 (Photo/CNS) China’s Military Blueprint: Bigger Navy, Bigger Global Role. China laid out its military strategy in its first-ever defense white paper, promising not to hit first, but vowing to strike back hard if attacked in a world full of what it sees as potential threats. 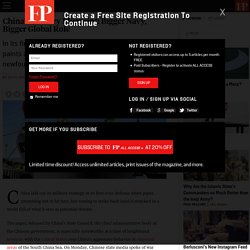 The paper, released by China’s State Council, the chief administrative body of the Chinese government, is especially noteworthy at a time of heightened tensions with the United States over China’s aggressive behavior in disputed areas of the South China Sea. On Monday, Chinese state media spoke of war with the United States as “inevitable” if the United States keep pressing Beijing on its illegal activities; in the United States, meanwhile, the consensus over accommodating China’s rise seems to have given way to a more hawkish stance on the need to contain the rising Asian giant. 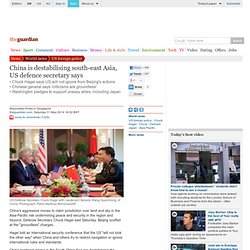 Beijing scoffed at the "groundless" charges. Hagel told an international security conference that the US "will not look the other way" when China and others try to restrict navigation or ignore international rules and standards. Chin's territorial claims in the South China Sea are destabilising the region, he said, adding that Beijing's failure to resolve such disputes threatens East Asia's long-term progress. A Chinese general took issue with Hagel's comments, saying that "although I do think that those criticisms are groundless, I do appreciate your candor. " Lieutenant General Wang Guanzhong, deputy chief of the general staff, told Hagel during a brief meeting after the defense secretary's speech: "You were very candid this morning and, to be frank, more than our expectation.

" Pentagon weighs sending planes, ships near disputed South China Sea reefs. US vs China Undersea. Despite China’s military build-up, US submarines are more than a match for its sea defences, a recent report says. 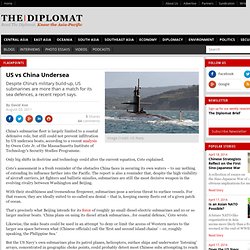 China's submarine fleet is largely limited to a coastal defensive role, but still could not prevent infiltration by US undersea boats, according to a recent analysis by Owen Cote Jr. of the Massachusetts Institute of Technology's Security Studies Programme. Only big shifts in doctrine and technology could alter the current equation, Cote explained. Cote's assessment is a fresh reminder of the obstacles China faces in securing its own waters – to say nothing of extending its influence farther into the Pacific. The report is also a reminder that, despite the high visibility of aircraft carriers, jet fighters and ballistic missiles, submarines are still the most decisive weapon in the evolving rivalry between Washington and Beijing.

With their stealthiness and tremendous firepower, submarines pose a serious threat to surface vessels. There’s a catch. Obama Targets Maritime Security as China Spars With Philippines Over Sea. President Barack Obama said the East Asia Summit he is attending in Indonesia is the “premier” arena to discuss concerns over maritime security, a topic China has resisted addressing at international forums. 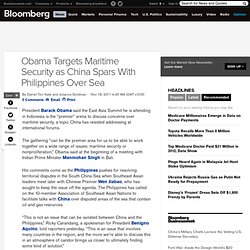 The gathering “can be the premier area for us to be able to work together on a wide range of issues: maritime security or nonproliferation,” Obama said at the beginning of a meeting with Indian Prime Minister Manmohan Singh in Bali. His comments come as the Philippines pushes for resolving territorial disputes in the South China Sea when Southeast Asian leaders meet later with Chinese Premier Wen Jiabao, who has sought to keep the issue off the agenda. The Philippines has called on the 10-member Association of Southeast Asian Nations to facilitate talks with China over disputed areas of the sea that contain oil and gas resources. Asean leaders are also meeting today with Obama, whose administration has pledged to bolster the naval defenses of the Philippines, a treaty ally. U.S. Obama boosts U.S. military in Australia, reassures China. China navy to carry out Pacific exercises. 23 November 2011Last updated at 23:48 ET. 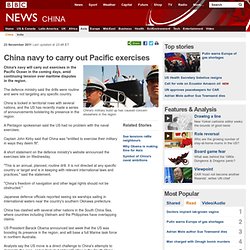 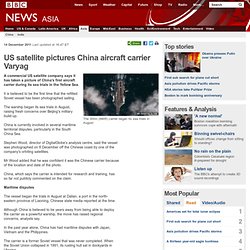 New Pentagon strategy stresses Asia, cyber, drones. Playing with fire: Obama's threat to China. When it comes to China policy, is the Obama administration leaping from the frying pan directly into the fire? 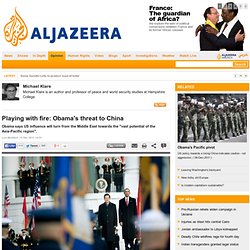 In an attempt to turn the page on two disastrous wars in the greater Middle East, it may have just launched a new Cold War in Asia - once again, viewing oil as the key to global supremacy. The new policy was signalled by President Obama himself on November 17 in an address to the Australian Parliament in which he laid out an audacious - and extremely dangerous - geopolitical vision.