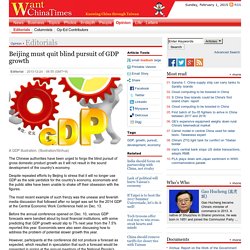 (Illustration/Xinhua) The Chinese authorities have been urged to forgo the blind pursuit of gross domestic product growth as it will not result in the sound development of the country's economy. Despite repeated efforts by Beijing to stress that it will no longer use GDP as the sole yardstick for the country's economy, economists and the public alike have been unable to shake off their obsession with the figures.

The most recent example of such frenzy was the unease and feverish media discussion that followed after no target was set for the 2014 GDP at the Central Economic Work Conference held on Dec. 13. Before the annual conference opened on Dec. 10, various GDP forecasts were bandied about by local financial institutions, with some predicting that GDP growth would slip to 7% next year from the 7.5% reported this year. It was evident from such discussions and speculation that many in China are overreacting and taking the GDP figures far too seriously.

[New post] Is the Gold Price Dependent on China? - geoorgge@gmail.com - Gma. The Temptation of China’s Capital Account by Yu Yongding - Project Syndicat. BEIJING – Despite fluctuations, China’s overall economic growth has been stable over the last three decades, owing not only to the economy’s strong fundamentals, but also to the government’s successful management of cross-border capital flows. 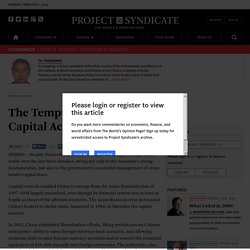 Capital controls enabled China to emerge from the Asian financial crisis of 1997-1998 largely unscathed, even though its financial system was at least as fragile as those of the affected countries. The Asian financial crisis persuaded China’s leaders to shelve plans, launched in 1994, to liberalize the capital account. In 2002, China reinitiated liberalization efforts, lifting restrictions on Chinese enterprises’ ability to open foreign-currency bank accounts, and allowing residents both to open foreign-currency accounts and to convert the renminbi equivalent of $50,000 annually into foreign currencies. In fact, such an acceleration has been underway since the government initiated renminbi internationalization in 2009. “…they really are not much use for a domestic financial crisis or as a weapon against the U.S…” 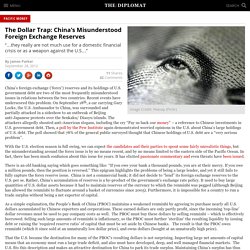 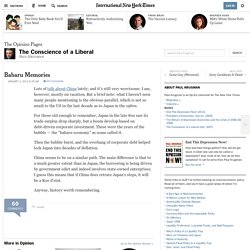 I am, however, mostly on vacation. But a brief note: what I haven’t seen many people mentioning is the obvious parallel, which is not so much to the US in the last decade as to Japan in the 1980s. For those old enough to remember, Japan in the late 80s saw its trade surplus drop sharply, but a boom develop based on debt-driven corporate investment. Beijing suspected of hiding US$700bn in US bonds｜Economy｜News｜WantChinaTime. US and Chinese bank notes. 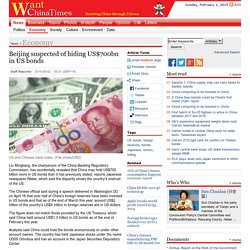 (File photo/CNS) Liu Mingkang, the chairperson of the China Banking Regulatory Commission, has accidentally revealed that China may hold US$700 billion more in US bonds than it has previously stated, reports Japanese newspaper Nikkei, which said the disparity shows the country's mistrust of the US. China’s Flawed Balance-of-Payments Position by Yu Yongding - Project Syndic. BEIJING – The balance-of-payments figures that China’s State Administration of Foreign Exchange (SAFE) released in April should have triggered serious concern, if not alarm. 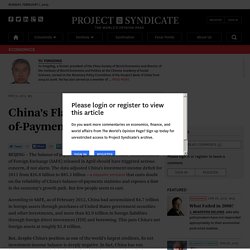 The data adjusted China’s investment-income deficit for 2011 from $26.8 billion to $85.3 billion – a massive revision that casts doubt on the reliability of China’s balance-of-payments statistics and exposes a flaw in the economy’s growth path. But few people seem to care. According to SAFE, as of February 2012, China had accumulated $4.7 trillion in foreign assets through purchases of United States government securities and other investments, and more than $2.9 trillion in foreign liabilities through foreign direct investment (FDI) and borrowing. 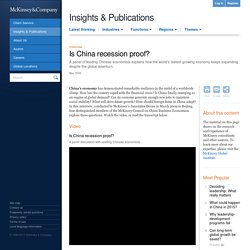 How has the country coped with the financial crisis? Is China finally emerging as an engine of global demand? Can its economy generate enough new jobs to maintain social stability? What will drive future growth? The Temptation of China’s Capital Account by Yu Yongding - Project Syndicat. Hong Kong’s inflationary austerity - Craig Stephen's This Week in China - M. HONG KONG (MarketWatch) — Most governments would happily have Hong Kong’s problems. 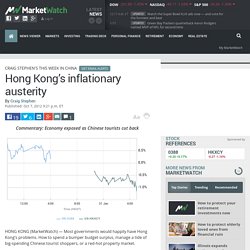 How to spend a bumper budget surplus, manage a tide of big-spending Chinese tourist shoppers, or a red-hot property market. The flip side of these big numbers, however, is soaring costs for those living or running a business in Hong Kong. Locals might not face austerity and tax rises European-style, but many still feel that living with bubble inflation is making them poorer. Can a Chinese auction house dominate the market? A little-known Chinese auction house is holding its first sale beyond the mainland in a bid to challenge the supremacy of Christie's and Sotheby's. So far, Hong Kong’s economy has avoided a bigger slump due to belt tightening by locals as spending by visitors has taken up the slack — be it luxury goods or apartments. Focus is on big spending mainland visitors who have flocked to duty free Hong Kong, buoyed by a stronger yuan and new individual traveling visas. China’s ‘crisis’ over as powerhouse heads to meet 7.5% growth target - Econ.

China is likely to have hit the bottom of a long downturn as third-quarter data suggested the worst may be over for the world’s number two economy. 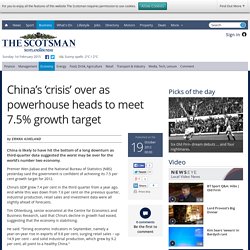 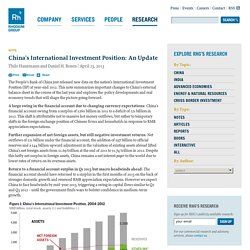 Rosen | April 23, 2013. Foreign Trade - U.S. Trade with China. Another Look at China’s GDP Numbers - China Real Time Report - WSJ. A child looks into a car window at a car dealership in Beijing on Sept. 24, 2013. WANG ZHAO/AFP/Getty Images Car sales surged in the U.S. last year, as the automotive industry came roaring back from the dark days of the recession. But the 15.6 million vehicles sold in America last year still lags behind China, which in 2013 reportedly became the first country to sell more than 20 million. The China Association of Automobile Manufacturers says those 2013 sales figures are a 14 percent increase over 2012's data. And a new report from IHS Automotive expects passenger vehicle sales in the People's Republic to rise further in 2014, as global and domestic automakers vie for the lucrative national market.