Johnson & Johnson ditch plastic cotton buds to save oceans  If you eat seafood, you are eating thousands of pieces of plastic. Seafood fans are ingesting up to 11,000 tiny pieces of plastic a year with unknown health effects, a new study reveals. 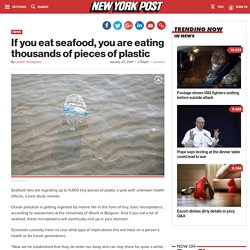 Ocean pollution is getting ingested by marine life in the form of tiny, toxic microplastics, according to researchers at the University of Ghent in Belgium. And if you eat a lot of seafood, these microplastics will eventually end up in your stomach. Scientists currently have no clue what type of implications this will have on a person’s health or for future generations. “Now we’ve established that they do enter our body and can stay there for quite a while, we do need to know the fate of the plastics,” Dr. Colin Janssen, who led the study, told Sky News. If This Plastic Bag Ends Up In The Ocean, Don't Worry. Meeting with automakers in January, Donald Trump vowed to make Detroit's life easier. 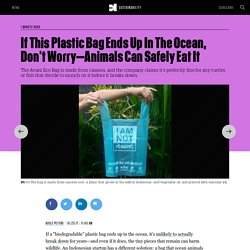 He said regulations on the auto industry are "out of control" and that his administration would create an "extremely hospitable" environment for making and selling cars in this country. Many observers took this to mean that Trump will soon roll back energy efficiency standards put in place by his predecessor. For light-duty vehicles, these are due to reach 39.5 miles per gallon (mpg) by 2017 and climb to 54.3 mpg by 2025.

If so, the effect on consumers and greenhouse emissions could be dramatic. Assuming people drive relatively the same amount, cars will use more fuel, meaning more spending at the pump, and more pollution into the atmosphere. According to a model created by Energy Innovation, a San Francisco research firm, a freeze at the current mpg level will cost consumers $64 billion through 2030, and $282 billion by 2040. "It depends on the price of gas, where you live, and other factors. From the Mariana Trench to the Arctic: plastic pollution is ocean enemy number one. Seafood eaters ingest up to 11,000 tiny pieces of plastic every year, study shows  New report looks at investment strategies for plastic-free seas. Ocean Conservancy Waste management's connection to sustainable development. 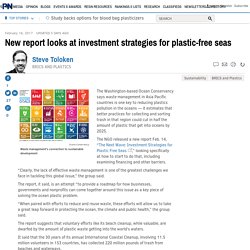 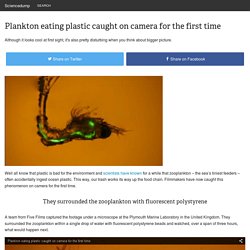 Well all know that plastic is bad for the environment and scientists have known for a while that zooplankton – the sea’s tiniest feeders – often accidentally ingest ocean plastic. This way, our trash works its way up the food chain. Filmmakers have now caught this phenomenon on camera for the first time. BPA alternative disrupts normal brain-cell growth, is tied to hyperactivity, study says. Companies used BPS as a safe alternative to BPA. 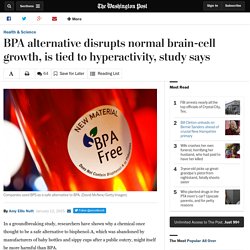 (David McNew/Getty Images) In a groundbreaking study, researchers have shown why a chemical once thought to be a safe alternative to bisphenol-A, which was abandoned by manufacturers of baby bottles and sippy cups after a public outcry, might itself be more harmful than BPA. University of Calgary scientists say they think their research is the first to show that bisphenol-S, an ingredient in many products bearing “BPA-free” labels, causes abnormal growth surges of neurons in an animal embryo.

The same surges were also found with BPA, though not at the same levels as with BPS, prompting the scientists to suggest that all structurally similar compounds now in use or considered for use by plastic manufacturers are unsafe. Recycling machines. Why throw something away when you can be rewarded for recycling it instead? 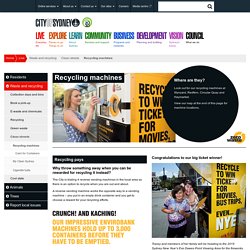 The City is trialing 4 reverse vending machines in the local area so there is an option to recycle when you are out and about. A reverse vending machine works the opposite way to a vending machine – you put in an empty drink container and you get to choose a reward for your recycling efforts. What can go into the machines? Documentary: Plastic pollution in our oceans. Plastic Seas, documentary by Jeneene Chatowsky - Algalita. This Video Shows How Garbage Patches Form in the Ocean. The researchers at NASA’s Science Visualization Studio are the unacknowledged artists behind many a viral video. 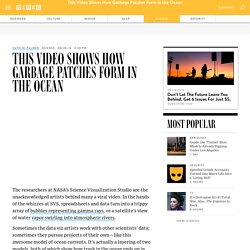 In the hands of the whizzes at SVS, spreadsheets and data turn into a trippy array of bubbles representing gamma rays, or a satellite’s view of water vapor swirling into atmospheric rivers. Sometimes the data viz artists work with other scientists’ data; sometimes they pursue projects of their own—like this awesome model of ocean currents. It’s actually a layering of two models, both of which show how trash in the ocean ends up in the five big pockets known as garbage patches.

The first model, called ECCO-2, simulates the movement of particles propelled by surface currents, projecting their motion up to 20 years into the future. Lead animator Greg Shirah and Horace Mitchell, the head data cruncher on the project, had the idea to drop the particles in the ocean all at the same time, evenly distributing them. Adrift: tracking the global ocean circulation. Adrift.org.au is intended as an educational site. 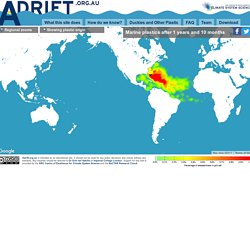 It should not be used for any policy decisions and comes without any warranty. Any inquiries should be directed to Dr Erik van Sebille at Imperial College London. Support for this site is provided by the ARC Centre of Excellence for Climate System Science and the NeCTAR Research Cloud. Adrift away... Cleaning the Air with Plastic [Excerpt] Adapted from The Unnatural World: The Race to Remake Civilization in Earth’s Newest Age, by David Biello. 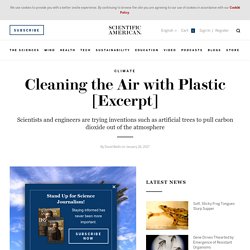 Published by Scribner, a Division of Simon & Schuster, Inc. Copyright © 2016 by David Biello. Reprinted with permission. The search is on for technologies that can pull carbon dioxide out of the air, thanks to a global push to limit such pollution and thus to limit global warming. Microplastics found in supermarket fish, shellfish. Tiny pieces of plastic are making their way into fish and shellfish found at the supermarket, a new study has shown. The findings are part of a report prepared for the International Maritime Organization, the UN agency responsible for preventing marine pollution. It's not yet been established what effect these tiny particles of plastic will have on the humans who consume them, the report says. Researchers do know, however, that microplastics get into aquatic habitats from many different sources, says Chelsea Rochman, an assistant professor of ecology and evolutionary biology at the University of Toronto and co-editor of the report. 'It has infiltrated every level of the food chain in marine environments … and so now we're seeing it come back to us on our dinner plates.' - Chelsea Rochman, University of Toronto ecologist They also vary in size such that they can be consumed by marine animals both big and microscopic.

6 Reasons That Floating Ocean Plastic Cleanup Gizmo is a Horrible Idea. One of the most disheartening things about the response to those scientific second thoughts is a common public response along the lines of "at least Slat is doing something about the problem, unlike these scientists who can't do anything but tear down his good idea instead of helping. " That's being said about people who have, in some cases, been sounding the alarm about plastic pollution since before Slat was born. Some groups critical of Slat's idea, such as the organization 5 Gyres (about whom more in a moment), have been working feverishly to come up with workable solutions to the ocean plastics problem.

A waiver is permissible if an adequate alternative water source is not available, reports GlobalFlare. Think Outside the Bottle campaign, a national effort that encourages restrictions of the “eco-unfriendly product,” was one of the largest supporters of the proposal. While the San Francisco ban is less strict than the full prohibitions passed in 14 national parks and a number of universities in Concord, Massachusetts, it is a step in the right direction. Those who violate the ban could face fines of up to $1,000. By 2050, there'll be more plastic than fish in our oceans. Zooplankton Are Eating Plastic, And That's Bad News For Ocean Life. Scientists find worms can safely eat the plastic in our garbage. LA is dumping millions of small plastic balls into its reservoir to tackle the drought. Holy crap. Watch this guy turn plastic back into oil. The Ocean Cleanup, Part 2: Technical review of the feasibility study. Inside the lonely fight against the biggest environmental problem you've never heard of.

A Mini Farm That Produces Food From Plastic-Eating Mushrooms.