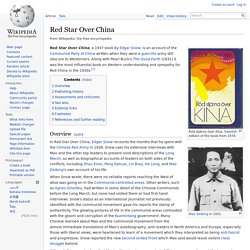 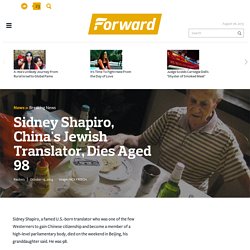 -born translator who was one of the few Westerners to gain Chinese citizenship and become a member of a high-level parliamentary body, died on the weekend in Beijing, his granddaughter said. He was 98. Shapiro was born in New York in 1915 and first came to China in 1947, having been selected by the U.S. army to learn Chinese during World War Two. He married a Chinese actress who was a supporter of the Communist Party, which at the time was fighting a civil war with the Nationalists, and did not visit the United States again until 1971. 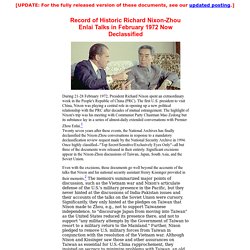 The first U.S. president to visit China, Nixon was playing a central role in opening up a new political relationship with the PRC after decades of mutual estrangement. The highlight of Nixon's trip was his meeting with Communist Party Chairman Mao Zedong but its substance lay in a series of almost-daily extended conversations with Premier Zhou Enlai.1 Twenty seven years after these events, the National Archives has finally declassified the Nixon-Zhou conversations in response to a mandatory declassification review request made by the National Security Archive in 1994.

Secrets, Lies, and Atomic Spies. Agnes Smedley, a triple agent who worked for the Soviets, the Chinese Communists, and the Indian nationalists, was one of the most prolific female spies of the 20th century. 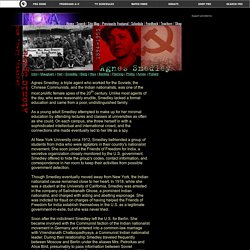 Unlike most agents of the day, who were reasonably erudite, Smedley lacked a formal education and came from a poor, undistinguished family. As a young adult Smedley attempted to make up for her minimal education by attending lectures and classes at universities as often as she could. On each campus, she threw herself in with a sophisticated intellectual and international crowd, and the connections she made eventually led to her life as a spy. At New York University circa 1912, Smedley befriended a group of students from India who were agitators in their country's nationalist movement.

She soon joined the Friends of Freedom for India, a secretive organization closely monitored by the U.S. government. Though Smedley eventually moved away from New York, the Indian nationalist cause remained close to her heart. An Error Occurred Setting Your User Cookie. Anti-Comintern Pact. ... recognizing that the aim of the Communist International, known as the Comintern, is to disintegrate and subdue existing States by all the means at its command; convinced that the toleration of interference by the Communist International in the internal affairs of the nations not only endangers their internal peace and social well‑being, but is also a menace to the peace of the world desirous of co‑operating in the defense against Communist subversive activities ...[1] Origins[edit] 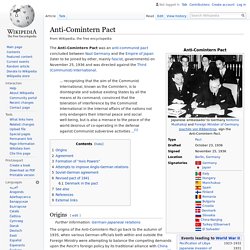 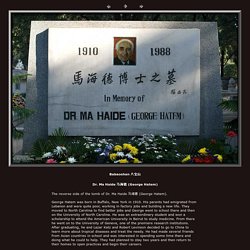 Ma Haide 马海德 (George Hatem). George Hatem was born in Buffalo, New York in 1910. His parents had emigrated from Lebanon and were quite poor, working in factory jobs and building a new life. They moved to North Carolina to find better jobs and George went to school there and then on the University of North Carolina. He was an extraordinary student and won a scholarship to attend the American University in Beirut to study medicine. What they found in Shanghai was not what they expected. Conditions were bad all over China, but they focused their attention on some of the foreign owned companies, feeling that there would be more that they could do there than with local factories and farms. Hatem's plan to return to America was put on hold. He traveled there with Edgar Snow and Snow's young translator. 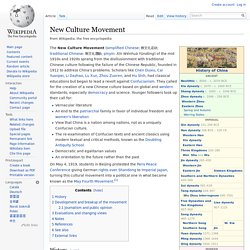 Scholars like Chen Duxiu, Cai Yuanpei, Li Dazhao, Lu Xun, Zhou Zuoren, and Hu Shih, had classical educations but began to lead a revolt against Confucianism. They called for the creation of a new Chinese culture based on global and western standards, especially democracy and science. Younger followers took up their call for: On May 4, 1919, students in Beijing protested the Paris Peace Conference giving German rights over Shandong to Imperial Japan, turning this cultural movement into a political one in what became known as the May Fourth Movement.[1] History[edit] May Fourth Movement. Students in Beijing rallied during the May Fourth Movement. 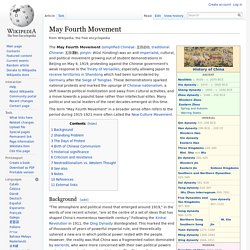 The May Fourth Movement (simplified Chinese: 五四运动; traditional Chinese: 五四運動; pinyin: Wǔsì Yùndòng) was an anti-imperialist, cultural, and political movement growing out of student demonstrations in Beijing on May 4, 1919, protesting against the Chinese government's weak response to the Treaty of Versailles, especially allowing Japan to receive territories in Shandong which had been surrendered by Germany after the Siege of Tsingtao. These demonstrations sparked national protests and marked the upsurge of Chinese nationalism, a shift towards political mobilization and away from cultural activities, and a move towards a populist base rather than intellectual elites.

Many political and social leaders of the next decades emerged at this time. May Fourth Movement (1919) May Fourth Movement, 1976 At the end of the First World War, in 1918, China was convinced it would be able to reclaim the territories occupied by the Germans in present-day Shandong Province. 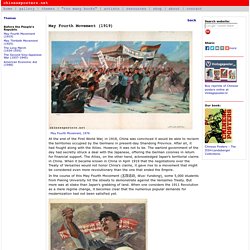 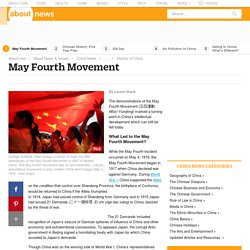 What Led to the May Fourth Movement? While the May Fourth Incident occurred on May 4, 1919, the May Fourth Movement began in 1917 when China declared war against Germany. Chinese students protest the Treaty of Versailles (the May Fourth Incident), 1919. Post-WWI China was fraught with political turbulence and social unrest. The Qing Dynasty was overthrown in 1911 and the Republic of China was instated in its place, ending thousands of years of imperial rule in the country and generating a host of new streams of intellectual and political thought. However, warlords still ruled strong throughout many of the provinces, fueling a chaotic and backwards politics that an emerging intelligentsia sought to change. Relations with Japan were an important part of this political landscape; in January 1915, Japan presented a list of demands to Chinese President Yuan Shih-k’ai, known as the “Twenty-one Demands,” seeking to assert and expand Japanese control over various regions of China that the country had interest in.

Among these regions was Shantung Province, a stipulation that garnered much opposition within China, and that would go on to be included in the May Fourth campaign’s objectives. THE MAY 4TH MOVEMENT. Selected Works of Mao Tse-tung May 1939. Round-Eyes-In-the-Middle-Kingdom - Trailer - Cast - Showtimes. Soviet invasion of Manchuria. Since 1983, the operation has sometimes been called Operation August Storm (mainly in the United States), after U.S.

Army historian David Glantz used this title for a paper on the subject.[1] Summary[edit] As agreed with the Allies at the Tehran Conference in November 1943 and the Yalta Conference in February 1945, the Soviet Union entered World War II's Pacific Theater within three months of the end of the war in Europe. The invasion began on 9 August 1945, exactly three months after the German surrender on May 8 (9 May, 0:43 Moscow time). the Khingan–Mukden Offensive Operation (9 August 1945 – 2 September 1945) (Lesser Khingan-Mukden area);the Harbin-Kirin Offensive Operation (9 August 1945 – 2 September 1945) (Harbin-Jilin area); andthe Sungari Offensive Operation (9 August 1945 – 2 September 1945). Background and buildup[edit] Kwantung Army. History[edit] Formation[edit] Kwantung Army on maneuvers Following the Russo-Japanese War, Japan obtained the Kwantung Leased Territory and the areas adjacent to the South Manchurian Railway.

"Kwantung" means "east of Shanhaiguan", a guarded pass, east of which lies Manchuria. The Kwantung Garrison was established in 1906 to defend this territory, and originally was composed of an infantry division and a heavy siege artillery battalion, supplemented with six independent garrison battalions as railway guards deployed along the South Manchurian Railway Zone, for a total troop strength of 10,000 men. Ursula Kuczynski. Ursula Ruth Kuczynski (15 May 1907, Schöneberg, Prussia, German Empire – 7 July 2000, Berlin, Germany,[1] also known as Ruth Werner, Ursula Beurton and Ursula Hamburger) was a German author and spy who worked for the Soviet Union.[2][3] Many names[edit] Two marriages and a career in espionage left her with an unusually diverse range of names which is reflected in the sources.

English Wikipedia currently (2014) favours Ursula Ruth Kuczynski which combines her birth name Ursula Maria Kuczynski with Ruth Werner, the name by which she is generally identified in sources covering her final four or five decades. Ruth Werner (Рут Вернер) is preferred by Russian and German Wikipedia. There are also sources that use her (second) married name, and identify her as Ursula Maria Beurton.[4] Pacifica Foundation: Hearings Before the United States Senate Committee on ... - United States. Congress. Senate. Committee on the Judiciary. Subcommittee to Investigate the Administration of the Internal Security Act and Other Internal Security Laws - Go. Charles Boxer, an Uncommon Life. Nós portugueses sempre nos orgulhamos muito do nosso império marítimo.