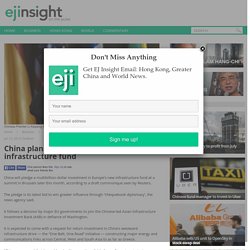 The pledge is its latest bid to win greater influence through “chequebook diplomacy’, the news agency said. It follows a decision by major EU governments to join the Chinese-led Asian Infrastructure Investment Bank (AIIB) in defiance of Washington. It is expected to come with a request for return investment in China’s westward infrastructure drive — the “One Belt, One Road” initiative — constructing major energy and communications links across Central, West and South Asia to as far as Greece. World Economic Forum sur Twitter : "How can #China reach the next stage of development? By Adair Turner #economics. How can China reach the next stage of development? LONDON – It is often assumed that emerging-economy living standards are bound to converge with those in developed countries. 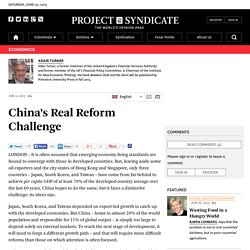 But, leaving aside some oil exporters and the city-states of Hong Kong and Singapore, only three countries – Japan, South Korea, and Taiwan – have come from far behind to achieve per capita GDP of at least 70% of the developed-country average over the last 60 years. China hopes to do the same, but it faces a distinctive challenge: its sheer size. Japan, South Korea, and Taiwan depended on export-led growth to catch up with the developed economies.

But China – home to almost 20% of the world population and responsible for 15% of global output – is simply too large to depend solely on external markets. To reach the next stage of development, it will need to forge a different growth path – and that will require more difficult reforms than those on which attention is often focused. The global financial crisis exposed that reality. This imperative is sometimes denied. U.S. Will Still Have Double China’s Per Capita Income by 2061. The U.S. will still have more than double China’s per capita income by 2061 even as Chinese income levels are tipped for more rapid growth. 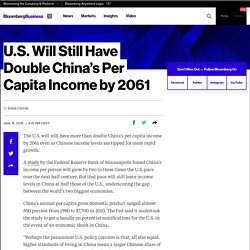 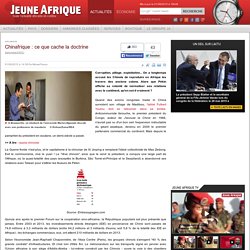 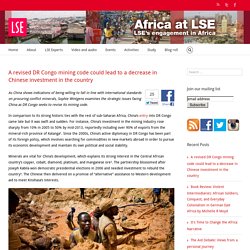 In comparison to its strong historic ties with the rest of sub-Saharan Africa, China’s entry into DR Congo came late but it was swift and sudden. For instance, China’s investment in the mining industry rose sharply from 10% in 2005 to 50% by mid-2013, reportedly including over 90% of exports from the mineral-rich province of Katanga¹. Since the 2000s, China’s active diplomacy in DR Congo has been part of its foreign policy, which involves searching for commodities in new markets abroad in order to pursue its economic development and maintain its own political and social stability. Minerals are vital for China’s development, which explains its strong interest in the Central African country’s copper, cobalt, diamond, platinum, and manganese ore². Mixed Signals: China in The Middle East.

China and Socialist Countries: Role Change and Role Continuity. Chinese hackers stole 'huge quantities' of sensitive data on Israel's Iron Dome. Israel’s Iron Dome has shielded the nation’s citizens from countless rockets, but the defense contractors who supplied the technology could not shield themselves from Chinese hackers between 2011 and 2012. 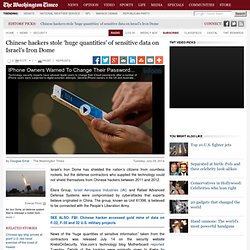 Elisra Group, Israel Aerospace Industries (IAI) and Rafael Advanced Defense Systems were compromised by cyberattacks that experts believe originated in China. The group, known as Unit 61398, is believed to be connected with the People’s Liberation Army. Chinese PM in Ethiopia as Part of Africa Tour. Chinese Premier Li Keqiang arrived in Ethiopia Sunday on the first leg of his four-nation tour of Africa. 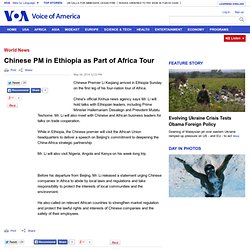 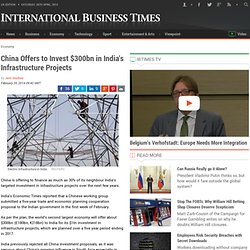 India's Economic Times reported that a Chinese working group submitted a five-year trade and economic planning cooperation proposal to the Indian government in the first week of February. As per the plan, the world's second largest economy will offer about $300bn (£180bn, €218bn) to India for its $1tn investment in infrastructure projects, which are planned over a five year period ending in 2017.

Africareview: INFOGRAPHIC - Top recipients... The Dragon awakes: Is Chinese competition policy a cause for concern? Blog post 'China’s catching up on competition policy enforcement' China’s Anti-Monopoly Law, adopted in 2007, is largely compatible with antitrust law in the European Union, the United States and other jurisdictions. 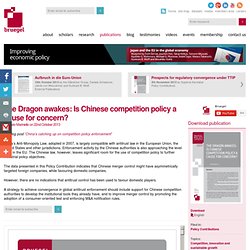 Enforcement activity by the Chinese authorities is also approaching the level seen in the EU. The Chinese law, however, leaves significant room for the use of competition policy to further industrial policy objectives. The data presented in this Policy Contribution indicates that Chinese merger control might have asymmetrically targeted foreign companies, while favouring domestic companies. However, there are no indications that antitrust control has been used to favour domestic players. China's moon mission could interfere with NASA lunar probe.

China's mission to robotically land on the moon next month is sure to stir up lunar dust, but it may also cause a political dustup, too. 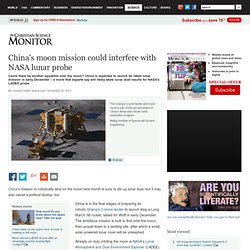 Skip to next paragraph Subscribe Today to the Monitor. Can China finally make the Nicaragua canal dream happen? Undeterred by a long string of failed megaproject plans, Nicaragua is now hitching its wagon to a new star: China. Or, more precisely, obscure Chinese businessman Wang Jing. Skip to next paragraph Subscribe Today to the Monitor Click Here for your FREE 30 DAYS ofThe Christian Science MonitorWeekly Digital Edition Mr. China and Africa Explore New Opportunities to Cooperate on Health Challenges in Africa and Strengthen Innovative Partnership. Via a Press Release: At first China-Africa health roundtable to be held in Africa, leaders gather in Botswana to promote South-South partnership on African health priorities GABORONE, Botswana, May 6, 2013 Chinese and African leaders will come together at the 4th International Roundtable on China-Africa Health Cooperation to explore new partnerships to address some of the most pressing health challenges facing Africa and strengthen an innovative health partnership based on south-south cooperation.

This year’s roundtable is the first to take place on the African continent. It will focus on promoting sustainable health solutions that meet the needs and priorities of African countries and draw on China’s unique expertise. Officials will engage in two days of sessions aimed at determining how China and African countries can jointly tackle critical issues such as AIDS, malaria, schistosomiasis, reproductive health, access to lifesaving vaccines and non-communicable diseases. China Past Due: Economic Reform. Few places on earth have more entrepreneurial energy than China. Since the economic reform era first released that energy 30 years ago, hundreds of millions of Chinese have used their own efforts to improve their lives and raise themselves out of poverty.

China's state sector has also played an important role in China's extraordinary economic growth, allowing the government to make and carry out big plans — building highways, railways, subways and entire cities — in the time it would take some governments to simply agree to move forward. But with economic growth slowing, the population aging, and the workforce shrinking, those entrepreneurs are being held back by a system trapped in transition, and China risks getting stuck in what the 'middle-income trap' — economic growth hitting a plateau and then stagnating before reaching 'developed nation' status.

China's new leaders are at least talking that talk. Many of the wealthy are relatives of Party leaders. Start with state banks. Shanghai hospitals on alert after new bird flu deaths. Shanghai's health bureau has ordered hospitals to step up monitoring and supervision of respiratory diseases after a new strain of bird flu killed two people in the city last month, the Shanghai Daily reported yesterday. A doctor in Shanghai said hospitals had been asked to report suspected cases on a daily basis. Two men aged 87 and 27 died after being infected with H7N9 avian influenza - a sub-type not transmitted to humans previously. The National Health and Family Planning Commission said a 35-year-old woman in Anhui was in a critical condition after being infected last month. She had been in contact with birds, while the younger man in Shanghai worked as a butcher, the state-backed Health News said on its website yesterday, suggesting a transmission route.

The head of the school of public health at Fudan University played down the threat. Where is the global economy heading? - Counting the Cost. This week on Counting the Cost, we look at the global economy and where it is heading. As China reports much anticipated growth figures we take a closer look at how that fits into the global picture and go behind the numbers with Jorge Mariscal, the chief investment officer for Emerging Markets at UBS Wealth Management. Can we trust the numbers that come out of China, and treat them as the most accurate numbers we could possibly get? Why China's Big Plans To Double GDP Won't Work Without Fixing The Wealth Divide. -Editorial- In his speech for the opening of the 18th Communist Party Congress, China’s leader, Hu Jintao set the goal of doubling China’s 2010 GDP and per-capita income by 2020.

This is the first time that China’s central government has explicitly set such a target. According to data from the National Bureau of Statistics, in 2010 the per-capita income was 19,109 Yuan ($3,000) for urban residents and 5,919 Yuan ($950) for rural residents. According to Li Yang, vice-director of the Chinese Academy of Social Sciences, as long as China has a 7.1% average annual GDP growth rate and a 7% per capita annual income growth rate, the goal of doubling Chinese people’s revenue will be achieved.

This is not surprising. In the past, we have always placed more stress on overall economic growth. Congresses of the Chinese Communist Party. Chinese mafia suspects to appear in court in Spain. TWQ: China’s Overstretched Military Strategy - Fall 2012. US cyber warrior accuses China of targeting Pentagon. The US Cyber Command’s top intelligence officer accused China of persistent efforts to pierce Pentagon computer networks and said a proposal was moving forward to boost the cyber command in the US military hierarchy. “Their level of effort against the Department of Defence is constant” while alleged Chinese attempts to steal corporate trade secrets has been growing, Rear-Admiral Samuel Cox, the command’s director of intelligence, said after remarks to a forum on the history of cyber threats.

The Office of the National Counterintelligence Executive, a US intelligence arm, said in a landmark report a year ago that “Chinese actors are the world’s most persistent perpetrators of economic espionage.” Why Nationalism is Driving China and Japan Apart. After an extended period of calm, leaders in Tokyo and Beijing are again allowing their relations to be dictated by domestic politics. By James Manicom for The Diplomat August 03, 2012 Facebook0. China: CNMC Public Listing Needs Investor Vigilance. The Chinese-African Union - An FP Slide Show. When the new African Union (AU) headquarters was unveiled in Addis Ababa, Ethiopia, earlier this year, the $200 million structure -- now the capital city's tallest building -- caused a splash.

The Revenge of Wen Jiabao - By John Garnaut.