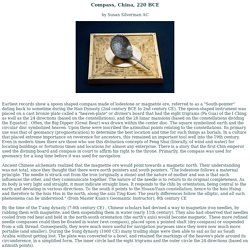 The spoon-shaped instrument was placed on a cast bronze plate called a "heaven-plate" or diviner's board that had the eight trigrams (Pa Gua) of the I Ching, as well as the 24 directions (based on the constellations), and the 28 lunar mansions (based on the constellations dividing the Equator) . Compass - Top 10 greatest inventions of ancient China. Gunpowder - China's Age of Invention. Share Posted 02.29.00 NOVA Printing, paper money, porcelain, tea, restaurants, gunpowder, the compass—the number of things that Chinese of the Song Dynasty (A.D. 960-1280) gave to the world is mind-boggling. 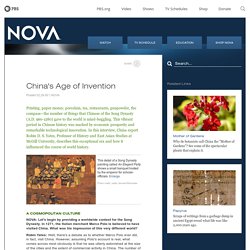 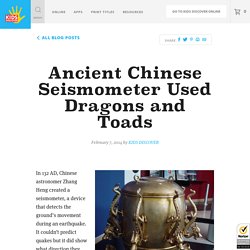 It couldn’t predict quakes but it did show what direction they were coming from — even when they were hundreds of miles away! Zhang was also a mathematician and mechanical engineer who constructed many practical devices, including a cart for measuring the Chinese mile, and an early armillary sphere, or globe-shaped model of the heavens.

His seismometer, the first known instrument built to detect earthquakes, was important, because devastating quakes happened in many remote regions of China. So a detection device helped the emperor know when and where to send timely aid from the capital. The bronze device featured eight metal dragons attached to what looked like a big coffee urn. Scientists think the mechanism inside the device was a type of pendulum system that was very sensitive to vibrations. For example, one day the dragon facing west dropped its ball. Seismograph : China Resurrects World's Earliest Seismograph. Chinese seismologists and archeologists have announced that they have created a replica of Didong Yi, the world's first seismograph. 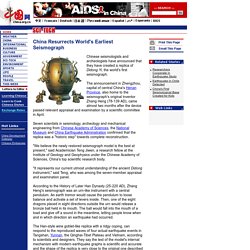 The announcement in Zhengzhou, capital of central China's Henan Province, also home to the seismograph's original inventor Zhang Heng (78-139 AD), came almost two months after the device passed relevant appraisal and examination by a scientific committee in April. Seven scientists in seismology, archeology and mechanical engineering from Chinese Academy of Sciences, the National Museum and China Earthquake Administration confirmed that the replica was a "historic step" towards complete reconstruction. Chinese Seismograph - China Facts for Kids!!

Seismograph. Seismograph. Zhang Heng Seismograph In the Exhibition Hall of the Museum of Chinese History in Beijing, there is a restored model of the first seismograph. 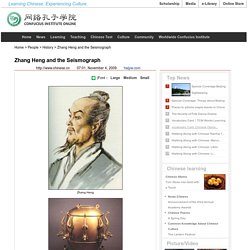 The inventor was Zhang Heng, a famous scientist in the Eastern Han Dynasty (25-220 AD). Seismograph Revisiting the Ancient Chinese. The Exhibition Hall of the Museum of Chinese History in Beijing is home to a restored model of the first seismograph—Houfeng Didong Yi—an instrument for testing wind and earth movements. 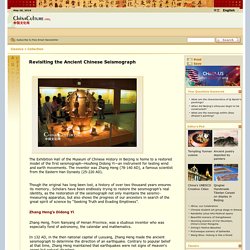 The inventor was Zhang Heng (78-140 AD), a famous scientist from the Eastern Han Dynasty (25-220 AD). Though the original has long been lost, a history of over two thousand years ensures its memory.. Scholars have been endlessly trying to restore the seismograph’s real identity, as the restoration of the seismograph not only maintains the seismic-measuring apparatus, but also shows the progress of our ancestors in search of the great spirit of science by “Seeking Truth and Evading Emptiness”. Zhang Heng’s Didong Yi. China Silk: Products, Cloth, Brocade, Crape, Buying Tips. "A silkworm spins all its silk till its death and a candle won't stop its tears until it is fully burnt. 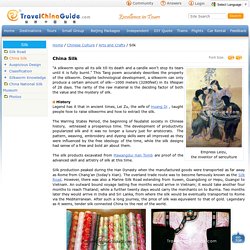 " This Tang poem accurately describes the property of the silkworm. Despite technological development, a silkworm can only produce a certain amount of silk---1000 meters (3280feet) in its lifespan of 28 days. Chinese Silk. Several thousand years ago, when the silk trade first reached Europe via theSilk Road, it brought with it not only gorgeous silk apparel and decorative items, but also the ancient and resplendent culture of the Far East. 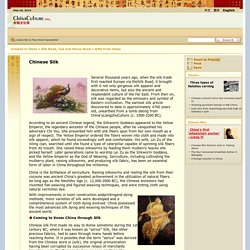 From then on, silk was regarded as the emissary and symbol of Eastern civilization. The earliest silk article discovered to date is approximately 4700 years old, unearthed from a tomb dating from China'sLiangzhuCulture (c. 3300-2200 BC). Chinese Silk and the Silk Road. It is well known that silk is discovered in China as one of the best materials for clothing - it has a look and feeling of richness that no other materials can match. 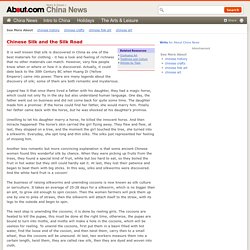 However, very few people know when or where or how it is discovered. Actually, it could date back to the 30th Century BC when Huang Di (Yellow Emperor) came into power. There are many legends about the discovery of silk; some of them are both romantic and mysterious. Legend has it that once there lived a father with his daughter, they had a magic horse, which could not only fly in the sky but also understand human language. One day, the father went out on business and did not come back for quite some time.

Unwilling to let his daughter marry a horse, he killed the innocent horse. Another less romantic but more convincing explanation is that some ancient Chinese women found this wonderful silk by chance. The business of raising silkworms and unwinding cocoons is now known as silk culture or sericulture. Articles by Topic. Silk - Top 10 greatest inventions of ancient China. History, Silk Association of Great Britain. History of Silk. (Sogdian silk, 8th century) Sericulture or silk production has a long and colorful history unknown to most people. 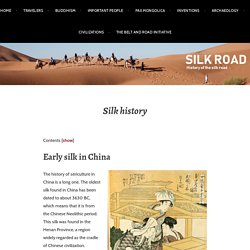 The first kites were what we today would call prototype kites: they were made of light wood and formed in the shape of a bird. Kite History. Dr. Keith Ray surveys the history of the kite in China. The article is taken from SACU's China Eye magazine 2004. The kite is something children all over the world play with. But how, and where, was the kite invented? And was it always a toy? Ancient China: Kites. The Chinese used kites for a number of different things. With regard to military uses, the Chinese used kites for signaling devices. By outfitting kites with bells and flutes, they would howl and sing in the wind and frighten their enemies. Bamboo pipes would sound random musical notes as the wind gathered momentum. About 200 BCE, the Chinese General Han Hsin of the Han Dynasty used a kite to measure the distance to the city he wanted to attack.

With this information, he was able to dig a tunnel into the city which bypassed the city’s defenses and provided his army with a victory. The History Of Kites - From Ancient Chinese Kites To Modern Stunt Kites. Ancient Chinese To Modern Stunters The history of kites spans thousands of years. I merged a number of kite-type-specific histories to create this complete time-line. Those smaller history write-ups are elsewhere on this site, but I thought it would be interesting to merge them all together. Now, I am not a professional historian, and the majority of this information was originally gleaned from the Web.

Some sources are more reliable than others. If you have expertise in any particular area and you can point out a definite error, please contact me, and it will be fixed. Covered in this history of kites are... See if you can spot some of these types over there on the right... The History Of Kites Between 1000 BC and 0 BC Somewhere between 770 BC and 221 BC large wooden kites called muyuan were invented for military purposes. Chinese Kites History. Search Related Articles Sponsor Ad Chinese Culture >> Chinese Handicrafts >> Chinese Kite History. Chinese Umbrellas, Oil Paper Umbrellas, Silk Umbrellas, Chinese Traditions. The Chinese are thought to have created the first waterproof umbrella and it has existed for over 3,000 years.

In the beginning, Chinese umbrellas were made of silk, and later paper umbrellas came into being. The frames of most umbrellas in China were and are made from bamboo or mulberry bark. History Regarding the invention of umbrella, there are many folk legends, among which the most widely spread one is the story about Luban inventing umbrella. Luban is a renowned carpenter, engineer and inventor in ancient China. As the folklore tells, daily meals delivered by Luban’s Wife Yun were often spoilt by downpours.

Umbrella. As early as 3500 years ago, umbrella had emerged in China. Regarding the invention of umbrella, there are many folk legends, among which the most widely spread one is the story about Luban inventing umbrella. According to the records of “Jade Chips”, umbrella was invented by Luban’s wife out of care and concern about her hardworking husband. As the folklore tells, daily meals delivered by Luban’s Wife Yun were often spoilt by downpours. So Luban built pavilions along the road. Later on, as inspired by children using lotus leaves for rain shelter, he invented the first umbrella by making a flexible framework covered by a cloth.