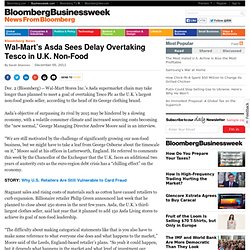 Asda’s objective of surpassing its rival by 2015 may be hindered by a slowing economy, with a volatile consumer climate and increased sourcing costs becoming the “new normal,” George Managing Director Andrew Moore said in an interview. “We are still motivated by the challenge of significantly growing our non-food business, but we might have to take a leaf from George Osborne about the timescale on it,” Moore said at his offices in Lutterworth, England.

He referred to comments this week by the Chancellor of the Exchequer that the U.K. faces an additional two years of austerity cuts as the euro-region debt crisis has a “chilling effect” on the economy. Stagnant sales and rising costs of materials such as cotton have caused retailers to curb expansion. How To Take Control of Your Next Job Interview. At the end of every job interview, you'll encounter the inevitable question, "Do you have any questions for me? 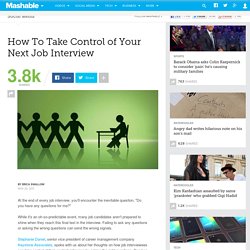 " While it's an oh-so-predictable event, many job candidates aren't prepared to shine when they reach this final test in the interview. Failing to ask any questions or asking the wrong questions can send the wrong signals. Stephanie Daniel, senior vice president of career management company Keystone Associates, spoke with us about her thoughts on how job interviewees can take control of their next job interview by asking the right questions. Read on for her thoughts on what to ask and which questions to avoid when it's your turn to interrogate. Asking the Right Questions When the interviewer gives you the opportunity to ask your own questions, be prepared. "Too many job seekers respond to this standard interview question with the standard 'safe' responses," says Daniel. So, what types of questions should you ask? How Walmart Is Changing China - Magazine. The world’s biggest corporation and the world’s most populous nation have launched a bold experiment in consumer behavior and environmental stewardship: to set green standards for 20,000 suppliers making several hundred thousand items sold to billions of shoppers worldwide. 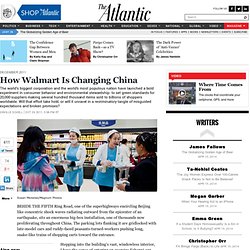 Will that effort take hold, or will it unravel in a recriminatory tangle of misguided expectations and broken promises? Susan Meiselas/Magnum Photos Beside the Fifth Ring Road, one of the superhighways encircling Beijing like concentric shock waves radiating outward from the epicenter of an earthquake, sits an enormous big-box installation, one of thousands now proliferating throughout China.

The parking lots flanking it are gridlocked with late-model cars and ruddy-faced peasants-turned-workers pushing long, snake-like trains of shopping carts toward the entrance. Also see: A Map of Walmart in China From sea cucumbers in Dalian to upscale Sam's Clubs in Shanghai, Walmart stores vary from province to province. Moving to China. Local Info for Global Expats. Moving to Hong Kong - expats living in Hong Kong. 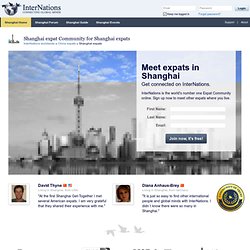 Ni hao! We welcome you to our Shanghai expats community! The InterNations network aims to support you when moving to or settling in Shanghai: Connect with fellow expatriates in Shanghai, receive helpful advice and information about expat life in China and join our InterNations get-togethers to meet up with other expats from the international community in Shanghai. A visit of our community for Hong Kong Expats is recommend if other InterNations chapters across Asia & Oceania are of interest for you.

Or your next business trip takes you to our Singapore Expats chapter… Enjoy your Shanghai Expat Experience The "Paris Of The East" opens its intercultural doors to you, beginning with its attractions such as the Bund, the historic neighbourhood alongside Huangpu River and once the financial centre of the Far East,, the traditional celebration of China’s Qingming Festival, to savoring a dish of Peking duck & hot pot. Shanghai Expat. Shanghai expat.