China Drops 15-Year 'Mental Health' Ban On Game Consoles. For a decade and a half, the Chinese government thought console games would rot your brains. 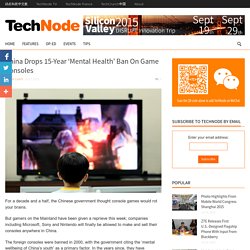 Is China Hungry For Micro Video? Not Just Yet: VivaVideo Founder. It’s an understatement to say that Chinese companies struggle to head abroad. 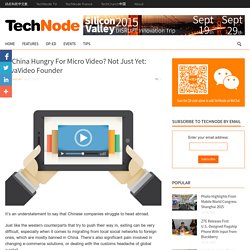 Just like the western counterparts that try to push their way in, exiting can be very difficult, especially when it comes to migrating from local social networks to foreign ones, which are mostly banned in China. There’s also significant pain involved in changing e-commerce solutions, or dealing with the customs headache of global e-retail. Han Sheng, founder of Chinese micro-video editing app VivaVideo, is tackling a different problem however; people in different countries use video in incredibly different ways. Southeast Asian users are all about the beautifying features, which apparently are a tough sell in North America. Outrage At China Treatment Of Activists. China shuts 50 websites and social media accounts. 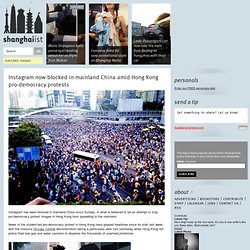 News of the student-led pro-democracy protest in Hong Kong have gripped headlines since its start last week, with the massive Occupy Central demonstration taking a particularly dark turn yesterday when Hong Kong riot police fired tear gas and water cannons to disperse the thousands of unarmed protestors. As photos and videos of the attacks flooded social media websites, China has seemingly cracked down on the dissemination of information. Instagram has been blocked since yesterday, according to greatfire.org, a censorship tracking website. Breakingviews : #China’s e-commerce secret ... China’s e-commerce secret weapon: the delivery guy.

Want a Big Mac delivered to your door in minutes? 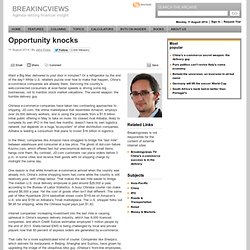 Or a refrigerator by the end of the day? While U.S. retailers puzzle over how to make that happen, China’s e-commerce companies are already there. Servicing the country’s web-connected consumers at ever-faster speeds is driving some big businesses, not to mention stock market valuations. The secret weapon: the humble delivery guy. Chinese e-commerce companies have taken two contrasting approaches to shipping. Report: China's mobile market will grow to $2.9 billion this year. If you're thinking about bringing your mobile game to China, now might be a good time to do it. 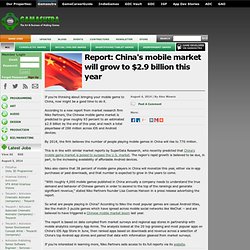 According to a new report from market research firm Niko Partners, the Chinese mobile game market is predicted to grow roughly 93 percent to an estimated $2.9 billion by the end of this year, and reach a total playerbase of 288 million across iOS and Android devices. By 2018, the firm believes the number of people playing mobile games in China will rise to 770 million. This is in line with similar market reports by SuperData Research, who recently predicted that China's mobile game market is poised to surpass the U.S. market. The region's rapid growth is believed to be due, in part, to the increasing availability of affordable Android devices.

Niko also claims that 38 percent of mobile game players in China will monetize this year, either via in-app purchases or paid downloads, and that number is expected to grow in the years to come. X_rosee : You gotta love #GuiJie in ... A Stroll Through Ghost Street. Ever since we moved to the Lama Temple Area, I’ve been meaning to try the infamous “Ghost Street Hotpots”.Now “Ghost Street” (鬼街) is not the real name of the road. 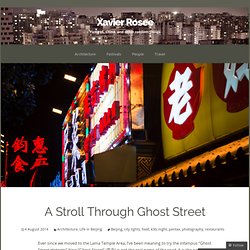 It is the part of Dongzhimen Inner Street （东直门内大街）that is leading to the Beixinqiao（北新桥）subway station. The origin behind the nickname is actually quite interesting: during the Qing Dynasty (1644-1912) each city gate had a very specific use. Since Dongzhimen (literally “The East Gate”) was used for taking dead people out of the city, the graveyard was, at the time, located just outside the gate. As a result, the street scene was filled with coffin stores, and the area nicknamed “The Ghost Market”. Xbox One hits China September 23. The first foreign console approved for sale in China since the lifting of a 14-year ban will arrive September 23. 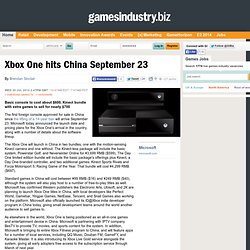 Microsoft today announced the launch date and pricing plans for the Xbox One's arrival in the country, along with a number of details about the software lineup. The Xbox One will launch in China in two bundles, one with the motion-sensing Kinect camera and one without. The Kinect-less package will include the basic system, Powerstar Golf, and Neverwinter Online for ¥3,699 RMB ($599). The Day One limited edition bundle will include the basic package's offerings plus Kinect, a Day One-branded controller, and two additional games: Kinect Sports Rivals and Forza Motorsport 5: Racing Game of the Year. 爱问共享资料 - 免费高速上传下载 - 新浪旗下在线资料分享站. 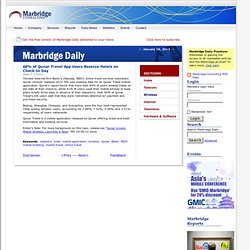 Qunar's report found that more than 60% of users booked hotels on the date of their check-in, while 41% of users used their mobile phones to book plane tickets three days in advance of their departure. Over 80% of Qunar Travel's iOS users said that they were "extremely attentive to" payment and purchase security.