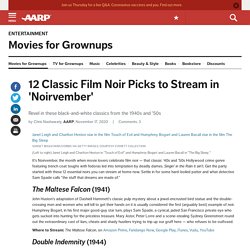 15 Best Film Noir Movies of All Time, Ranked for Filmmakers. The golden age of cinema is surprisingly dark. 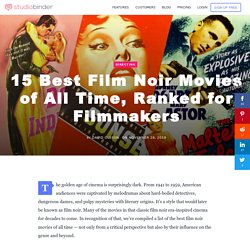 From 1941 to 1959, American audiences were captivated by melodramas about hard-boiled detectives, dangerous dames, and pulpy mysteries with literary origins. It’s a style that would later be known as film noir. Many of the movies in that classic film noir era-inspired cinema for decades to come. In recognition of that, we’ve compiled a list of the best film noir movies of all time — not only from a critical perspective but also by their influence on the genre and beyond. What is film noir? Film noir is a style or genre of films made in Hollywood in the '40s and '50s that have stylistic and thematic similarities. 20 best film noirs: From Double Indemnity to Shadow of a Doubt. He phrase film noir was first coined in 1946 by a group of French critics to describe the emerging movement of mainly black and white Hollywood films with dark, pessimistic themes and signature motifs such as alienated antiheroes, rain slicked streets, dark shadows and seductive femme fatales. 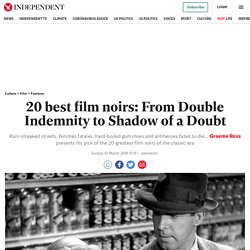 Borrowing heavily from the hard-boiled but literary detective novels of Dashiell Hammett and Raymond Chandler, film noir attracted some of cinema’s greatest craftsmen including Orson Welles, Howard Hawks, Billy Wilder and John Huston, as well as directors who came to specialise in the genre such as Robert Siodmak, Fritz Lang and Otto Preminger. Tellingly, many of these craftsmen were of European extraction and brought their expressionist influences with them, in turn influencing generations of filmmakers right up to the present day. 20.

Kiss Me Deadly (Robert Aldrich, 1955)The movie that virtually killed off the classic knight errant private eye forever. 19. Jon Hamm plays oblivious Eels fan in video for “Are We Alright Again” Jon Hamm, aka Mad Men's Don Draper, features in Eels' "Are We Alright Again" video, which sees him getting burgled without his knowledge. 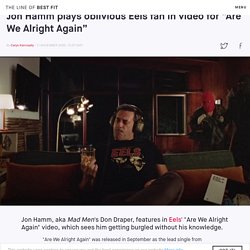 "Are We Alright Again" was released in September as the lead single from Eels' latest album Earth to Dora, and today (11 November) the band have shared the visual. TED’s summer culture list: 114 podcasts, books, TV shows, movies, more. Rose Wong Whether you’re staying put or going away, summer is a great time to relax and to try new things. 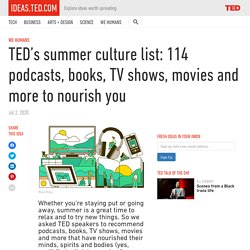 So we asked TED speakers to recommend podcasts, books, TV shows, movies and more that have nourished their minds, spirits and bodies (yes, you’ll find a link to a recipe for olive-cheese loaf below) in recent times. You can use the links here to jump to your favorite category. TeamLab Borderless Tokyo Official Site :MORI Building DIGITAL ART MUSEUM. Notes on purchasing tickets・Price includes tax. 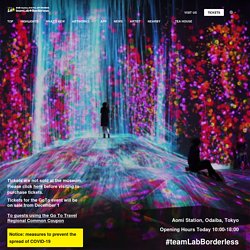 ・Please note that It is not possible to cancel or date change tickets after purchase.You can change the dates and times only for tickets purchased on the official ticket website. Please see here for the conditions. ・Tickets have specific admission dates and times, and may sell out. ・To the guest who have a disability certificate.Guests with Disabilities tickets are available for persons who have disability certificates andone accompanying person each.Each person requires one ticket to enter the facility. (There is no discount on child ticket)*We will check the disability certificate at the entrance gate, please come with your accompanying person. Notice to Visitors・This facility cannot be held liable for any visitor's personal injury, loss, or other problems occurring here. Alan Moore & Mitch Jenkins – Lex Records. Alan Moore is best known for writing comic books including V For Vendetta, From Hell and Watchmen. 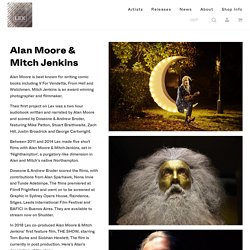 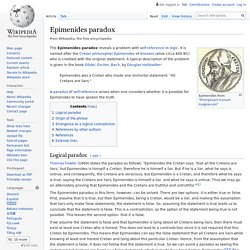 A complete guide to every song and piano cover featured on ‘Westworld’ – Business Insider Singapore. HBO's "Westworld" has featured several iconic piano covers from composer Ramin Djawadi, plus current music.We're here to give you an episode-by-episode guide to all the songs heard in the series.We'll update this guide each week. 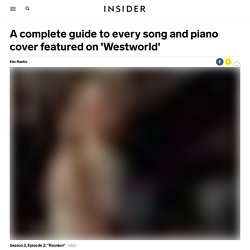 As of now, this article contains spoilers for events through season three, episode three.The latest track played at the end of episode three, "The Absence of Field," was a cover of Moses Sumney's song "Doom. " 'Westworld': Full chronological timeline explained in one graphic - Insider.

Warning: Spoilers ahead for "Westworld. 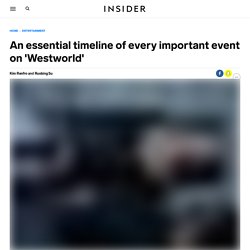 " Behind the scenes of WWI epic 1917. Westworld, saison 3 : un improbable trailer caché façon rom' com. What to rewatch before Star Trek Picard - RunPee. I haven’t seen the new Picard show yet, but I’m extremely excited, and according to the trailers, it picks up where the long-running (non-JJ Abrams) Star Trek TV and movie series left off… Just 20 years later. And Patrick Stewart, like the rest of us, are 20 years older. Dune Concept Art and Illustrations I. Before George Lucas’ Star Wars or George R.R. Martin’s Game of Thrones, there was Frank Herbert’s epic novel Dune. An inspiring science fiction story exploring a variety of themes including technology, ecology, politics and religion, Dune won the first Nebula Award for Best Novel in 1966 and has since inspired many artists to come.

Que fait un pêcheur ? YouTube. Inside Alan Moore's Head - Culture. Born to Be Blue: Ethan Hawke on the fast life and mysterious death of Chet Baker. When asked how much he knew about jazz before playing the fabled trumpeter Chet Baker in Born to Be Blue, Ethan Hawke starts off by mentioning the Miles Davis LP he filched from his mother while still only a boy. She only had about 20 LPs, he reports, so the heist did not go unnoticed. He then moves on to discuss Baker’s attempts to impress the laconic, distant Davis, Charlie Parker’s influence on the music of the 1950s, and Baker’s working relationships with saxophonist Gerry Mulligan, trumpeter Dizzy Gillespie and pianist Herbie Hancock. The actor also mentions a snippy remark Wynton Marsalis once made about the ageing, past-his-prime Baker.

Le fantastique Mr Murray. Sir Terry Pratchett - The life and works of Sir Terry Pratchett OBE. The Watch, produced by BBC Studios and Narrativia, uses Terry Pratchett’s City Watch books as inspiration to create a ‘uniquely anarchic and thrillingly entertaining police procedural.’ The Cast The cast will be led by actor Richard Dormer playing the legendary Sam Vimes. Now On Netflix, 'The Bill Murray Stories' - A Perfect Movie For The New Year. For years now, Bill Murray sightings have been the stuff of legend. The time he crashed a bachelor party to offer some unsolicited advice on love. The time he hopped behind the bar at an Austin watering hole to sling cocktails. The time he showed up at a London house party... and did all the dishes. From Mozart to Weird Al: The Evolution of Parody.

American Gods Official Site. Do Einstein&#39;s Theories Explain Portals in Comics? The Importance of UNBREAKABLE In A Pre-Marvel Cinematic Universe. Mr. Robot (TV series) - Wikipedia. Vikings (TV series) - Wikipedia. The Facebook Companies. Proof That the Creators of Batman: The Animated Series Knew What They Were Doing From the Start. Io9 - We come from the future. Westworld Trailer (HBO) - MATURE VERSION.