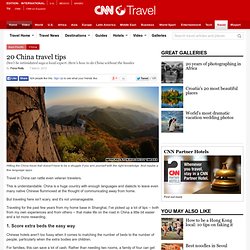 This is understandable. China is a huge country with enough languages and dialects to leave even many native Chinese flummoxed at the thought of communicating away from home. But traveling here isn't scary, and it's not unmanageable. Traveling for the past few years from my home base in Shanghai, I've picked up a lot of tips -- both from my own experiences and from others -- that make life on the road in China a little bit easier and a lot more rewarding. 1. Chinese hotels aren't too fussy when it comes to matching the number of beds to the number of people, particularly when the extra bodies are children. For families, this can save a lot of cash. Don't spend coins in north China. 2. Greenland juilong hotel, shanghai. Shikumen Museum, Shanghai Reviews - China, Asia Attractions. China - Travel Guide, Info & Bookings – Lonely Planet.

Whether it’s your first visit or your twentieth, China is so big, so diverse and so fast-changing, it’s always an adventure. 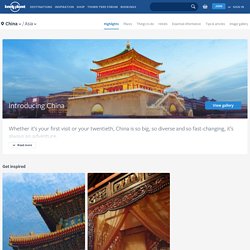 Breathtaking Antiquity Let’s face it: the world’s oldest continuous civilisation is bound to pull an artefact or two out of its hat. There isn't history at every turn – three decades of perpetual development and socialist town-planning have taken their toll – but travel selectively in China and rich seams of antiquity await exploration. Trip to China- tour or independent??? China Train Schedule - China Railway Departure Timetable. 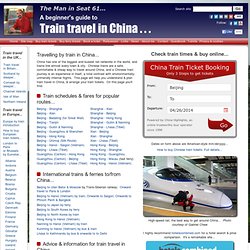 China has one of the biggest and busiest rail networks in the world, and trains link almost every town & city. Chinese trains are a safe, comfortable & cheap way to travel around China, and a Chinese train journey is an experience in itself, a total contrast with environmentally-unfriendly internal flights. This page will help you understand & plan train travel in China, & arrange your train tickets. On this page you'll find: Train schedules & fares for popular routes... 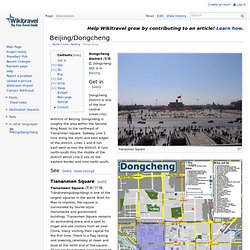 Get in[edit] Dongcheng District is one of the four central (inner-city) districts of Beijing. Dongcheng is roughly the area within the Second Ring Road, to the northeast of Tiananmen Square. Subway Line 2 runs along the north and east edges of the district. See[edit][add listing] Tiananmen Square[edit] China: Train Travel. China Tours, China Tour Packages, China Travel Packages. Map of China - China Map Search Engine. China Trip Advisor - Home. China Travel – Info for Travel to China. Best Destinations in China - Travelers' Choice Awards. Beijing. A stone lion guards Mao's portrait at the Tiananmen Beijing is a huge city with several district articles containing sightseeing, restaurant, nightlife and accommodation listings — have a look at each of them. 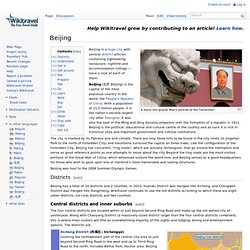 Beijing (北京 Běijīng) is the capital of the most populous country in the world, the People's Republic of China. With a population of 21.5 million people, it is the nation's second-largest city after Shanghai. It was also the seat of the Ming and Qing dynasty emperors until the formation of a republic in 1911. Beijing is the political, educational and cultural centre of the country and as such it is rich in historical sites and important government and cultural institutions.

The city is marked by its flatness and arid climate. Beijing was host to the 2008 Summer Olympic Games. Districts[edit] Beijing has a total of 14 districts and 2 counties. Central districts and inner suburbs[edit] Chaoyang travel guide. "Bird's Nest" Stadium Chaoyang District (朝阳区 Cháoyáng Qū) is in Beijing. 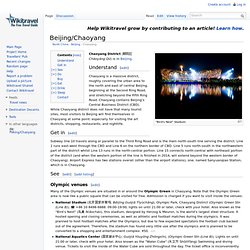 Understand[edit] Chaoyang is a massive district, roughly covering the urban area to the north and east of central Beijing, beginning at the Second Ring Road, and stretching beyond the Fifth Ring Road. Chaoyang contains Beijing's Central Business District (CBD). While Chaoyang district does not have that many tourist sites, most visitors to Beijing will find themselves in Chaoyang at some point: especially for visiting the art districts, shopping, restaurants, and nightlife. Wangfujing. Coordinates: Wangfujing pedestrian street Wángfǔjǐng (Chinese: 王府井; pinyin: Wángfǔjǐng; literally "Prince's Mansion well"), located in Dongcheng District, Beijing, and is one of the Chinese capital's most famous shopping streets. 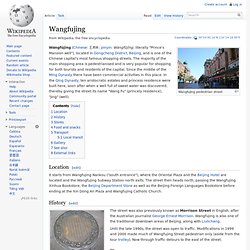 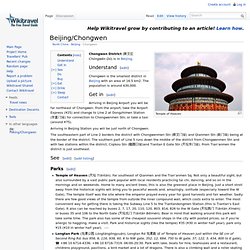 Understand[edit] National Center for the Performing Arts Reviews - Beijing, China Attractions. Beijing Beihai Park: Location, History, White Dagoba Tour. With the Forbidden City and Jingshan Park to its east, Zhongnanhai (Central and Southern Seas) to its south, Beihai (Northern Sea) Park is one of the oldest, largest and best-preserved ancient imperial gardens in China located in the city center. 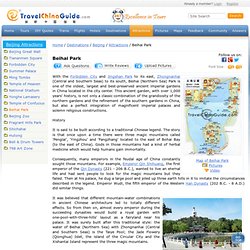 This ancient garden, with over 1,000 years' history, is not only a classic combination of the grandiosity of the northern gardens and the refinement of the southern gardens in China, but also a perfect integration of magnificent imperial palaces and solemn religious constructions. History It is said to be built according to a traditional Chinese legend.

Forbidden City and Tiananmen Square Tour. Veering right (east) after the Hall of Preserving Harmony, you will pass through a courtyard where contests of archery and horsemanship were once held. 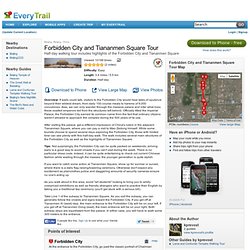 Nowadays, you can pick up a soda or other light refreshment before heading on to the northeast section of the Forbidden City. The areas to the south are not open to the public. Before you can view the Hall of Jewelry and all the treasures within, you must buy an additional ticket for 10RMB. If you're hesitating, note that the ticket actually grants access to several different sites in this section, not just the one hall.

As you go through the gate, you will see the "Nine Dragon Screen" on your left, which is a colorful mural composed of 270 glazed tiles. Campus - Beijing Haidian Foreign Language Shiyan School. Beijing haidian foreign language shi yan school. Summer Palace, an Imperial Garden in Beijing. Beijing Summer Palace: the Largest Royal Park in China. Situated in the Haidian District northwest of Beijing City, the Summer Palace is 15 kilometers (9.3 miles) from central Beijing. Being the largest and most well-preserved royal park in China, it greatly influences Chinese horticulture and landscape with its famous natural views and cultural interests, which also has long since been recognized as 'The Museum of Royal Gardens'.

The construction started in 1750 as a luxurious royal garden for royal families to rest and entertain. THE PALACE MUSEUM. Liulichang Culture Street Beijing - China Highlights. Summary Liulichang Culture Street The street has a long history and rich cultural atmosphere. Overview Liulichang Antiques Street is now located outside He Ping Men, west to south and north Liu Lane in Xuan Wu district and east to Yan Shou Temple street with a length of 800 meters. In Yuan dynasty, official cave dwelling was set to produce glazed tiles. Stores There are many famous old stores at Liulichang Antiques Street including Huai Yin Shan House, the Old Art House, Rui Cheng House, Cui Wen Garret, Yi De Garret, LI Fishou Pen Store as well as China Book Store---- the largest old book store in China. Badaling Great Wall of Beijing: Self-service Tour and Tips. The Great Wall is a symbol of Chinese civilization, and one of the wonders that the Chinese people have created.

Badaling Great Wall, the most representative part, was promoted as a key national cultural relic, protected under the approval of the State Council in 1961. In 1988, it was enlisted in the World Cultural Heritage Directory by UNESCO. On July 7, 2007, it gained the worldwide reputation once again: it was listed among the New Seven Wonders of the World. Beijing-badaling. Beijing Redwall Hotel Beijing-Your Best Beijing Hotels. The Xian Guide: Huaqing Hot Spring. Xi'an has always been known to the Chinese as a city rich with history, but it only gained recognition in much of the Western world in 1936 when Generalissimo Chiang Kai-shek was kidnapped there by some of his own generals. The Xi'an Incident, as it became known, held the leadership of China hanging in the balance for a couple of tension-wracked weeks.

An intriguing sequence of events brought on the kidnapping and its solution. In 1936, while Hitler marched in Europe, the Japanese army was steadily tightening its grip on China. Chiang Kai-shek was not so much in control as simply being at the top of a fragile coalition of Chinese warlords and armies spread over China. Bell Tower Hotel Xian China.