Formation of the Chinese Civilization. China History: Chronology, Dynasty Qin Han Tang Song Yuan Ming Qing. China, one of the countries that can boast of an ancient civilization, has a long and mysterious history - almost 5,000 years of it! 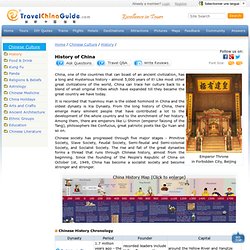 Like most other great civilizations of the world, China can trace her culture back to a blend of small original tribes which have expanded till they became the great country we have today. It is recorded that Yuanmou man is the oldest hominoid in China and the oldest dynasty is Xia Dynasty. From the long history of China, there emerge many eminent people that have contributed a lot to the development of the whole country and to the enrichment of her history. Among them, there are emperors like Li Shimin (emperor Taizong of the Tang), philosophers like Confucius, great patriotic poets like Qu Yuan and so on. Chinese society has progressed through five major stages - Primitive Society, Slave Society, Feudal Society, Semi-feudal and Semi-colonial Society, and Socialist Society. Introduction to Ancient China. Shang Dynasty. 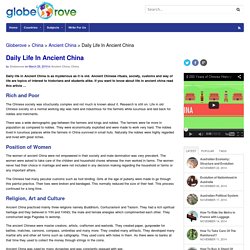 Ancient Chinese rituals, society, customs and way of life are topics of interest to historians and students alike. If you want to know about life in ancient china read this article … The Chinese society was structurally complex and not much is known about it. Research is still on. Life in old Chinese society on a normal working day was hard and industrious for the farmers while luxurious and laid back for nobles and merchants. Invention of Paper, Paper use in Han Dynasty History, History of Ancient China. Ancient China Inventions.

China has contributed many modern technological advances; but, have you ever wondered about ancient Chinese inventions? 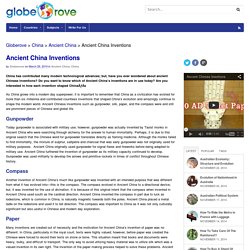 Do you want to know which of Ancient China’s inventions are in use today? Are you interested in how each invention shaped ChinaÃƒÂ¢ As China grows into a modern day superpower, it is important to remember that China as a civilization has existed for more than six millennia and contributed countless inventions that shaped China’s evolution and amazingly continue to shape the modern world. Ancient Chinese inventions such as gunpowder, silk, paper, and the compass were and still are prominent pieces of Chinese and global life.

Today gunpowder is associated with military use; however, gunpowder was actually invented by Taoist monks in Ancient China who were searching through alchemy for the answer to human immortality. Compass. Ancient China Clothing. Do you want to know what was in fashion in Ancient China? 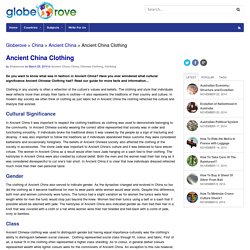 Have you ever wondered what cultural significance Ancient Chinese Clothing had? Read our guide for more facts and information... Clothing in any society is often a reflection of the culture’s values and beliefs. The clothing and style that individuals wear reflects more than simply their taste in clothes—it also represents the traditions of their country and culture. Xia Dynasty - Ancient Chinese History. Ancient China Economy. Crime and Punishment in Ancient China. See, also, China: A Legal History. 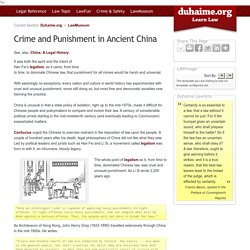 It was both the spirit and the intent of Han Fei’s legalism, as it came, from time to time, to dominate Chinese law, that punishment for all crimes would be harsh and universal. With seemingly no exceptions, every nation and culture in world history has experimented with cruel and unusual punishment; some still doing so, but most free and democratic societies now banning the practice.

China is unusual in that a state policy of isolation, right up to the mid-1970s, made it difficult for Chinese people and policymakers to compare and evolve their law. A century of considerable political unrest starting in the mid-nineteenth century (and eventually leading to Communism) exacerbated matters. Confucius urged the Chinese to exercise restraint in the imposition of law upon the people.

The whole point of legalism as it, from time to time, dominated Chinese law, was cruel and unusual punishment. "Trials and Chinese courts of law are conducted by torture. Ancient China Religion. Ancient China Geography. Ancient China Government. Ancient China had monarchy, i.e. government headed by an emperor and a royal family. 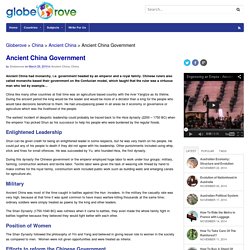 Chinese rulers also called monarchs based their government on the Confucian model, which taught that the ruler was a virtuous man who led by example… China like many other countries at that time was an agriculture based country with the river Yangtze as its lifeline. During the ancient period the king would be the leader and would be more of a dictator than a king for the people who would take decisions beneficial to them. He had unsurpassing power in all areas be it economy or governance or agriculture which was the livelihood of the people. The earliest incident of despotic leadership could probably be traced back to the Hsia dynasty (2200 – 1750 BC) when the emperor Yao picked Shun as his successor to help his people who were burdened by the regular floods. Shun can be given credit for being an enlightened leader in some respects, but he was very harsh on his people. 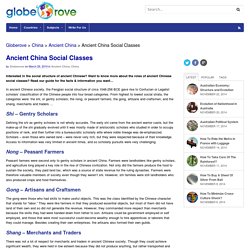 Want to know more about the roles of ancient Chinese social classes? Read our guide for the facts & information you want… In ancient Chinese society, the Fengjian social structure of circa 1046-256 BCE gave rise to Confucian or Legalist scholars’ classification of the Chinese people into four broad categories. From highest to lowest social strata, the categories were: the shi, or gentry scholars; the nong, or peasant farmers; the gong, artisans and craftsmen; and the shang, merchants and traders … Defining the shi as gentry scholars is not wholly accurate. Nong – Peasant Farmers.