Inicio - Cátedra China. China's Reckoning: The Economic Miracle Hits Troubled Times. Pitch Perfect Pinyin. Each Chinese character is represented by a syllable and an accompanying tone; some characters may have more than one way to pronounce them. 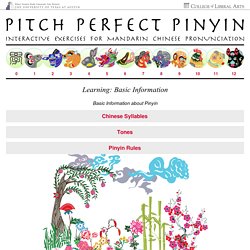 A syllable consists of a. an initial + a final b. a final without an initial An initial is a consonant. A final can be a. a simple vowel, e.g. a, e, i, o, u; b. a compound vowel, e.g. ao, uo, ou; c. a vowel followed by "n" or "ng," e.g. in, en, ang, ong. There are four (first, second, third and fourth) basic tones and a fifth tone referred to as the neutral tone. The first tone is high and remains high with no change in pitch; e.g. mā The second tone is a raising tone, which starts from the middle pitch and goes up to the high pitch; e.g., má The third tone can be either a full third tone or a half third tone. Change of tone - Mandarin Chinese I. Word placement can often change the tone of a word. 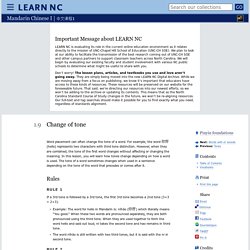 For example, the word 你好 (hello) represents two characters with third tone distinction. However, when they are combined, the tone of the first word changes without affecting or changing the meaning. In this lesson, you will learn how tones change depending on how a word is used. The tone of a word sometimes changes when used in a sentence depending on the tone of the word that precedes or comes after it. Rules Rule 1. Seeing the Tones of Mandarin Chinese with Praat. 轻松调频 CRI EZfm，from Beijing for China.

Chinese Internet Radio - Listen to Chinese online radio news and music and practice your Chinese! Google Translate. Eastasiastudent. Getting daily handwriting practice in Chinese can be a bit tricky if you don’t tend to handwrite things that much. 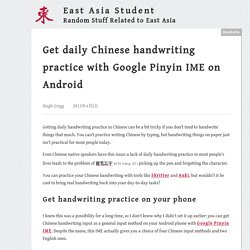 You can’t practice writing Chinese by typing, but handwriting things on paper just isn’t practical for most people today. Even Chinese native speakers have this issue: a lack of daily handwriting practice in most people’s lives leads to the problem of 提笔忘字 (tí bǐ wàng zì) : picking up the pen and forgetting the character. You can practice your Chinese handwriting with tools like Skritter and Anki, but wouldn’t it be cool to bring real handwriting back into your day-to-day tasks?

I knew this was a possibility for a long time, so I don’t know why I didn’t set it up earlier: you can get Chinese handwriting input as a general input method on your Android phone with Google Pinyin IME. Despite the name, this IME actually gives you a choice of four Chinese input methods and two English ones.

There’s my horrible but legible 修 . Chinese handwriting recognition. With this tool you can draw a Chinese character which will be recognized. 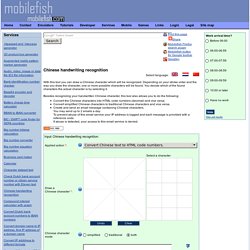 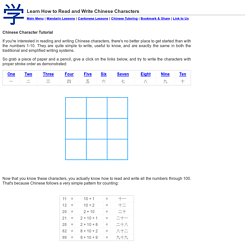 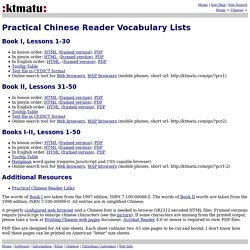 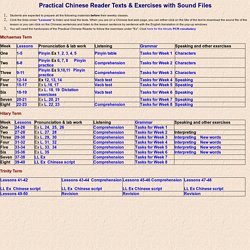 Click the links under "Lessons" to listen and read the texts. When you are on a Chinese text web page, you can either click on the title of the text to download the sound file of the lesson or you can click on the Chinese sentences and listen to the lesson sentence by sentence with the English translation in the pop-up windows. You will need the hardcopies of the Practical Chinese Reader to follow the exercises under "Ex". Click here for the ktmatu PCR vocabulary Michaemas Term Hilary Term Trinity Term. Moca. The Serie of Events Overview:Being a breathtaking natural phenomenon and one of the origins of ancientChinese history, the Three Gorges is also famous for the massive Three GorgesProject and the socioeconomic changes that it has brougt to the country. 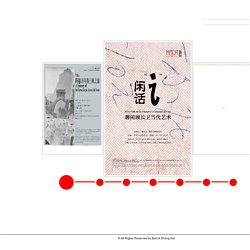 Thereare a great diversity of texts and pictures of the Three Gorges which makelater works either be influenced by them or attempt to resist them. Every shotand every story-telling, not only make comparisons between the past and thepresent, but also enable images to talk with each other. First Lecture: A Journey of the Three Gorges Across 130 YearsTime：15:00-17:00pm, March 21st,(Saturday) 2015 Speaker：Xia Youzhi Organizers: Museum of Contemporary Art Shanghai, The Paper, Ray Art CenterCurator: Xia YouZhi Archibald John Little andhis wife are English merchants and travelers. Rockbund Art Museum. The National Art Museum of China. Chinese Nationalities Ethnic Culture Park (175 photos; 7 videos) Minzu, Beijing, China. Beijing's Museums & Galleries. 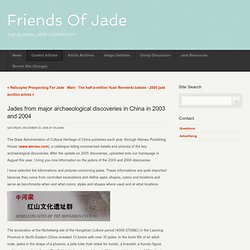 After the update on 2005 discoveries, uploaded onto our homepage in August this year, I bring you now information on the jaders of the 2003 and 2004 discoveries. I have selected the informations and pictures concerning jades. These informations are quite important because they come from controlled excavations and define ages, shapes, colors and locations and serve as benchmarks when and what colors, styles and shapes where used and at what locations. Shang Shu. Www.language.berkeley.edu/fanjian/tier3.html. Chinese Character Writing Sheets 汉字练习纸. 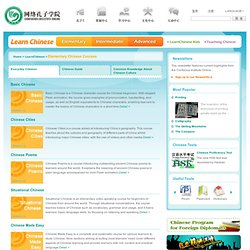