Green city innovation. Zhang’s prefab skyscrapers are one of the most compelling green-building answers to China’s chronic pollution. 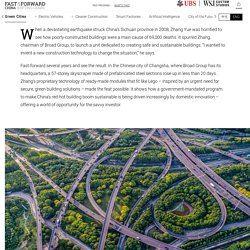 The method radically cuts building waste and transport to and from the construction site. Mass-production of components off-site yields tremendous energy savings. And since the buildings can be dismantled easily, the steel modules can be recycled or re-used in other buildings. The breakthrough won Zhang a place as the only Chinese among Fortune’s top 10 global “eco-innovators”. “I’ve had some interactions with him – he very deeply feels the importance of the environment,” says Chris Marquis, Cornell University Samuel C. Such a concerted drive makes green cities one of the hottest investment opportunities for the global investor.

Future bright for China. “The very strong position of the Chinese government is to advance China beyond being just a factory to being a designer,” says Bill Fischer, professor of innovation management at IMD in Lausanne, Switzerland. 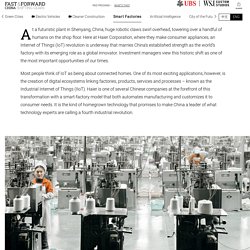 “The sorts of IoT that you see within the factories, China will play a lead role in that.” China’s ambition to become the world’s digital foundry might be the trigger for one of the most important growth and investment narratives in Asia – making China a critical part of the global investor’s portfolio. How is AI driving China’s future? China’s one billion people speak more than 200 dialects, across 23 provinces, in countless accents. 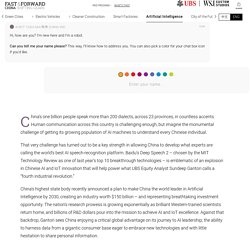 Human communication across this country is challenging enough, but imagine the monumental challenge of getting its growing population of AI machines to understand every Chinese individual. That very challenge has turned out to be a key strength in allowing China to develop what experts are calling the world’s best AI speech-recognition platform. Global power is shifting to Asia – and Europe must adapt to that.

In 2012, McKinsey analysts, using data from the University of Groningen, released a striking map showing how the global economic centre of gravity has shifted since AD1. 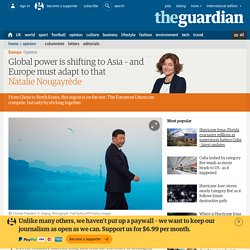 Yes, you read that correctly: since Jesus was a year old. Looking at the map now brings a fresh reminder of how Europe’s global position is fast being challenged. Awakening to that reality is why it makes sense to stick together and make the European project thrive, not wither away. Here’s a glimpse of what the map says. It took one century, from 1820 to 1913, for the centre of gravity (as measured by “weighing” locations’ GDP) to move from Asia to Europe. We’ve been mentally adjusting to this shift for some time. So much is going on in our own region. Europe matters, but it often seems to matter less than we would like. It all has a psychological impact. With this in mind, changing public perceptions has to be a key part of rebooting the European project. Which brings us back to the global picture. 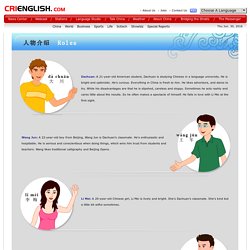 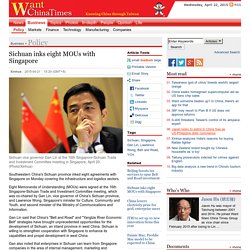 Sourcing Goods and Suppliers in China: 8 Common Mistakes U.S. Companies Make. The world of rice- Nikkei Asian Review. Urbanites Flee China’s Smog for Blue Skies. She finished her run one morning beneath cloudless blue skies and sat down with a visitor from Beijing in the lakeside boutique hotel started by her and her husband. 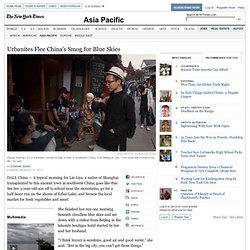 “I think luxury is sunshine, good air and good water,” she said. “But in the big city, you can’t get those things.” More than two years ago, Ms. Lin, 34, and her husband gave up comfortable careers in the booming southern city of Guangzhou — she at a Norwegian risk management company, he at an advertising firm that he had founded — to join the growing number of urbanites who have decamped to rural China. Ten forces forging China’s future. In early June 2013, several hundred of the world’s leading CEOs gathered in Chengdu, China, and discussed that country’s rapidly evolving business environment: growth is slowing and wages are climbing just as a new upper middle class emerges, a new wave of innovation rises, and a new generation of leaders steps to the fore. 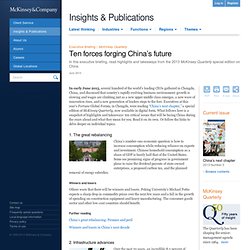 Executives at this year’s Fortune Global Forum, in Chengdu, were reading “China’s next chapter,” a special edition of McKinsey Quarterly, now available in digital form. What follows here is a snapshot of highlights and takeaways: ten critical issues that will be facing China during the years ahead and what they mean for you. Read it on its own. A business event examining China's economy, politics and society. Forecasting China. I started writing lists of what might happen in China seven or eight years ago. 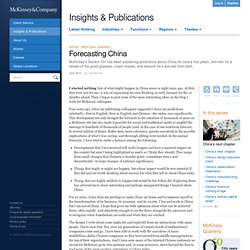 At first, they were just for me—a way of organizing my own thinking in early January for the 12 months ahead. Then I began to post some of the more interesting ideas on the blog I write for McKinsey colleagues. Four years ago, when my publishing colleagues suggested I share my predictions externally—first in English, then in English and Chinese—the stakes rose significantly. China's financial coming-of-age - hofmannalbrecht - Gmail. China Prepares for Slower Economic Growth - Newsweek and The Daily Beast. China’s next chapter: Tech, manufacturing, and innovation. McKinsey partners explore China’s coming technology transformation, the challenges facing manufacturers, and an exciting new wave of innovative enterprise sparked by high mobile penetration and social media. 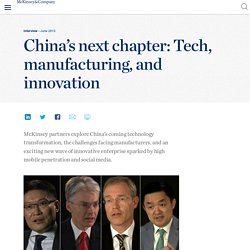 Digital innovation looks set to drive China’s future productivity growth as companies there absorb the lessons of successful enterprise IT programs elsewhere in the world, capture opportunities to exploit “big data,” and reinvent operating processes to increase efficiency. The relative scarcity of big legacy IT systems, the high penetration of mobile devices, and the wide popularity and use of social media are all advantages on which the country can build.

Manufacturers in particular must rapidly adapt to rising labor costs, growing volatility, more complex value chains, and increasingly sophisticated consumers. A new era for manufacturing in China. China’s emergence as a manufacturing powerhouse has been astonishing. In seventh place, trailing Italy, as recently as 1980, China not only overtook the United States in 2011 to become the world’s largest producer of manufactured goods but also used its huge manufacturing engine to boost living standards by doubling the country’s GDP per capita over the last decade. That achievement took the industrializing United Kingdom 150 years. Today, however, China faces new challenges as economic growth slows, wages and other factor costs rise, value chains become more complex, and consumers grow more sophisticated and demanding. China’s New President Sets Up a Potential Showdown, With Himself.

Ng Han Guan/Associated Press Police officers outside the People’s Bank of China, the country’s central bank, in Beijing. The bank eased up on a cash squeeze Friday, a day after interest and interbank lending rates soared. The country’s new leader, Xi Jinping, has ignited expectations of bold economic liberalization, but he has also cast himself as a resolute defender of Communist Party control, leaving even insiders uncertain about how far he will push changes that could strain the webs of state patronage and unsettle the stability that he and many other officials also prize. The changes proposed by some Chinese officials include rolling back certain state controls on prices of energy and natural resources, encouraging private business in industries long dominated by state conglomerates and bringing more market competition into the financial sector.

Mr. China's urbanization imperative - hofmannalbrecht - Gmail. The Re-shoring Debate: Sentiment or Hard Numbers? The Re-shoring Debate: Sentiment or Hard Numbers? By: Robert J. Bowman, SupplyChainBrain | June 17, 2013 According to the latest survey by AlixPartners, LLP, the U.S. is already equal to Mexico in â€œattractivenessâ€ as a place to make product that was previously sourced in China. In terms of hard numbers, itâ€™s on track to achieve cost parity with imports from China by 2015. The comparison, of course, is based on more than just labor rates. China’s Great Uprooting - Moving 250 Million Into Cities. Mao in the Middle.

Jason Lee/Reuters SHANGHAI — “Andy Warhol: 15 Minutes Eternal” is the largest collection of the artist’s works ever to appear in Asia. The two-year tour, which has already had stops in Hong Kong and Singapore, is now showing in Shanghai at the recently opened state-run Power Station of Art — minus Warhol’s iconic silkscreen paintings of Mao. It’s unclear whether those portraits were kept out of the exhibit at the authorities’ explicit request or because of self-censorship on the organizers’ part. Either way, their absence reveals an acceptance of the Chinese leadership’s continuing effort to protect the use of its founding father’s image. Warhol’s Mao paintings are “provocatively colored” and “stretch the official acceptance too far,” according to an editorial in the nationalist Global Times newspaper. Willy Lam, a Hong Kong-based political analyst, told me this week that Mao has the status of “a demigod,” and one cannot be “allowed to make a portrait of God. China outsources pollution to poorer regions.

China's growing wealth has produced a paradox of sorts: it now outsources carbon pollution within its own borders just as wealthier countries have done with China. A study published on Monday in the Proceedings of the National Academic of Sciences of the United States of America (PNAS) examined how less developed regions of China are now bearing the brunt of CO2 pollution to make consumer goods for its more cosmopolitan eastern coastal region. About 57% of CO2 emissions in poorer provinces can be attributed to the manufacturing of goods that are consumed elsewhere in the country, the study says.

China's central and western provinces absorb 80% of the emissions associated with carbon goods that are consumed in its coastal areas. "As the world's largest emitter of CO2, China is a prominent and important example, struggling to balance rapid economic growth and environmental sustainability across provinces that are in very different stages of development," the study says. Mapping China’s middle class. China's rising consumer class - hofmannalbrecht - Gmail. Language borrowing: Why so little Chinese in English? 徐守盛:精心组织毛主席诞辰120周年纪念活动，振奋精神加快发展 - 滚动新闻 - 湖南日报网 - 华声在线.

徐守盛在韶山专题考察调研时要求 精心组织毛主席诞辰120周年纪念活动. Mao's birthday: Party time. June Highlights: China's great rebalancing - hofmannalbrecht - Gmail. The United States and China need to overcome mutual misunderstandings. Wesley Clark is a retired Army general and former supreme allied commander of NATO. He is a fellow at the Burkle Center for International Relations at UCLA. P resident Obama’s talks with Chinese President Xi Jinping should mark the United States’ true “pivot” to Asia — and it can’t come soon enough. China is more powerful than many Americans realize, and it is on a trajectory to become even more capable. At the same time, the Chinese may underestimate or misread us.

Why China isn’t taking American trash anymore. Quick, what's the biggest U.S. export to China? Soybeans? Officially, yes, it's the biggest single product. But combined, the U.S. exports more scrap and waste to China than any other single product -- $11.31 billion in 2011. Could China Be Getting Serious About Quality, Safety of Food Produced There? More Scares Ahead After China's Rat Meat Scandal. The Chinese dream: The role of Thomas Friedman. China Needs Its Own Dream. Helmut Schmidt: Besuch bei einer Weltmacht.