How China, The World's Fastest Growing Economy, Is Tackling Its Sex Problem. On a scrubland car park in a dreary suburb of Dongguan, on mainland China just north of Hong Kong, a dozen expensive sports cars sit baking in the early morning sun. 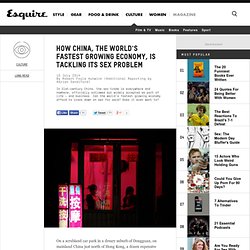 Their owners are inside the adjacent building, a "luxury entertainment centre" as it styles itself. Here, men with eye masks doze after a night’s carousing. They lie on rows of BarcaLoungers with built-in cable tuned to HBO or Korean drama. Upstairs, in the private rooms, a complicated menu details the services on offer. Below, in the basement, a spa ensures that everyone can head straight back to the office, clean-shaven. Those baffling menus, drunkenly perused, allude to China’s rich pre- and post-Confucian sexual history – as well as the language’s endless talent for florid euphemism. “Ice and Fire; Nine Steps to Heaven” is fellatio performed alternately with ice cubes and hot water. “Roaming the North Pole” and “Divine Dragon Sways its Tail”: these are left to Esquire’s imagination. 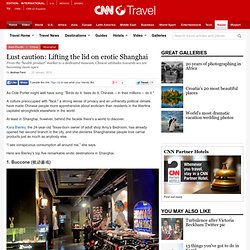 " A culture preoccupied with "face," a strong sense of privacy and an unfriendly political climate have made Chinese people more apprehensive about eroticism than residents in the libertine capitalist strongholds elsewhere in the world. At least in Shanghai, however, behind the facade there's a world to discover. Kara Bierley, the 24-year-old Texas-born owner of adult shop Amy’s Bedroom, has already opened her second branch in the city, and she declares Shanghainese people love carnal products just as much as anybody else. 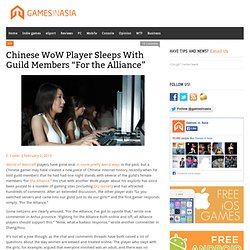 Custer | February 2, 2013 World of Warcraft players have gone viral in some pretty weird ways in the past, but a Chinese gamer may have created a new piece of Chinese internet history recently when he told guild members that he had had one night stands with several of the guild’s female members “for the Alliance.” His chat with another WoW player about his exploits has since been posted to a number of gaming sites (including QQ Games) and has attracted hundreds of comments. After an extended discussion, the other player asks “So you switched servers and came into our guild just to do our girls?” And the first gamer responds simply: “For the Alliance.” Some netizens are clearly amused. It’s not all a joke though, as the chat and comments threads have both raised a lot of questions about the way women are viewed and treated online.

Some of the comments on the story are also blatantly sexist. (via QQ Games, image source) Chongqing Police Pressure Sex Video Whistleblower. The blogger who released a sex video that brought down Chongqing official Lei Zhengfu last year has refused to hand over footage of other officials despite threats of prison time for withholding evidence. 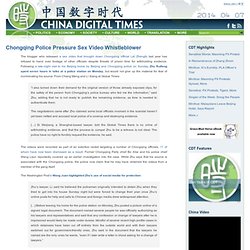 Following a late-night visit to his Beijing home by Beijing and Chongqing police on Sunday, Zhu Ruifeng spent seven hours in talks at a police station on Monday, but would not give up the material for fear of incriminating his source. From Chang Meng and Li Xiang at Global Times: The videos were recorded as part of an extortion racket targeting a number of Chongqing officials, 11 of whom have now been dismissed as a result.

Former Chongqing Party chief Bo Xilai and his police chief Wang Lijun reportedly covered up an earlier investigation into the case. While Zhu says that his source is associated with the Chongqing police, the police now claim that he may have obtained the videos from a member of the gang itself. Solitary Sex. Summary：On a certain Chinese social networking site where most of the groups and discussion revolves around books and films, a user claiming to be a sexy model posted a message: "Would anybody out there be so kind to invite me for a late dinner? 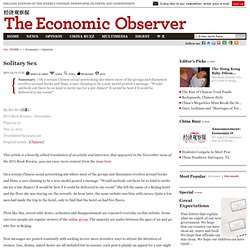 It would be best if it could be delivered to my room! " By Bai Mo (白墨)EO's Book Review - NovemberPage 23-31Nov 11, 2011Translated by Laura Lin Original article: [Chinese] This article is a heavily edited translation of an article and interview that appeared in the November issue of the EO's Book Review, you can view more content from the issue here. Solitary Sex.