Cement and pig consumption reveal China's huge changes - BBC News. What China Has Been Building in the South China Sea. From Reef to Island in Less Than a Year. 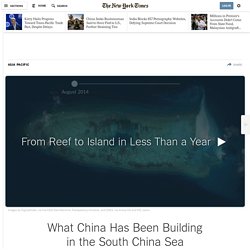 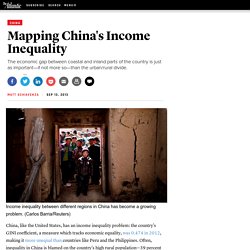 (Carlos Barria/Reuters) China, like the United States, has an income inequality problem: the country's GINI coefficient, a measure which tracks economic equality, was 0.474 in 2012, making it more unequal than countries like Peru and the Philippines. Welcome to Baoding, China's most polluted city. It is a rare blue-skied day in the city of Baoding, in north-eastern China. 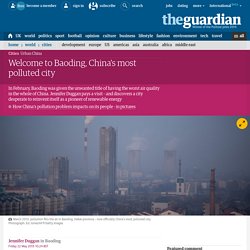 It’s not even that clear, but the hazy sky is as blue as it gets here. Most days, the sky is obscured by a thick blanket of smog. China 'building airstrip' in disputed South China Sea territory. China is making rapid progress in building an airstrip suitable for military use in contested territory in the South China Sea, according to new satellite images. 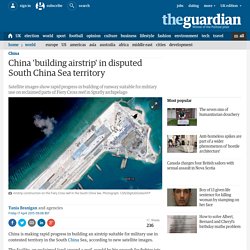 The facility, on reclaimed land around a reef, would be big enough for fighter jets and surveillance aircraft. IHS Jane’s Defence Weekly said images from Airbus Defence and Space, taken on 23 March, showed the runway on Fiery Cross reef in the disputed Spratly archipelago already stretched to 500m and had room to grow to six times that length. Paved sections of apron were also visible. China claims almost all of the South China Sea in a complex dispute which also involves the Philippines, Vietnam, Malaysia, Brunei and Taiwan. Tensions have risen in recent years, due partly to growing interest in the area’s energy reserves and partly to broader anxieties about China’s rise and increasing assertiveness.

China and India - 13 charts that show how the countries compare. As China’s president Xi Jinping heads to India to meet prime minister Narendra Modi, it is tempting to hold the two countries up against each other. 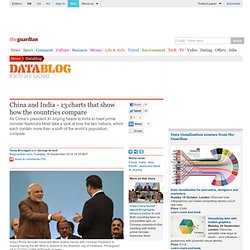 Each contains more than a sixth of the world’s population. Each has seen dramatic economic growth in recent decades yet each is still beset by widespread poverty. And each now has a strong leader at the helm. But many argue the countries and their trajectories are too dissimilar for comparisons to be useful. The Indian journalist Pallavi Aiyar, who spent several years covering China, argued recently that the world’s largest democracy should be looking to Indonesia - not to its authoritarian neighbour. China’s unemployment rate is higher than India’s, but some say underemployment also needs to be taken into account. The militaries of each country number well over 1 million personnel. 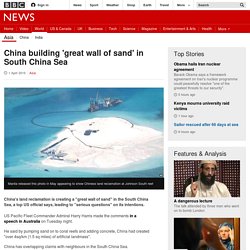 US Pacific Fleet Commander Admiral Harry Harris made the comments in a speech in Australia on Tuesday night. He said by pumping sand on to coral reefs and adding concrete, China had created "over 4sq/km (1.5 sq miles) of artificial landmass". China has overlapping claims with neighbours in the South China Sea. It has been reclaiming land in contested waters - something it said last year was "totally justified" as it had "sovereignty" over the area. In recent months images have emerged of Chinese construction on reefs in the Spratly Islands to create artificial islands with facilities that could potentially be for military use, including an air strip. China Q1 FDI rises 11.3% File photo: Containers at the harbor of Ningbo, east China’s Zhejiang Province [Xinhua] With foreign investors showing no signs of doubts over slowing growth, foreign direct investment (FDI) into the Chinese mainland jumped 11.3 per cent year on year in the first three months of 2015, settling at $34.88 billion, the Ministry of Commerce (MOC) announced Thursday. 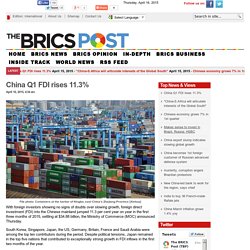 South Korea, Singapore, Japan, the US, Germany, Britain, France and Saudi Arabia were among the top ten contributors during the period. Despite political tensions, Japan remained in the top five nations that contributed to exceptionally strong growth in FDI inflows in the first two months of the year. The pace slowed from the 17 per cent increase registered in January-February period, however, it far exceeded the annual growth rate posted for 2014 of 1.7 per cent. Service industry FDI totaled $21.59 billion in the first quarter, up 24.1 per cent year on year. TBP and Agencies. China Turns To Africa For Resources, Jobs And Future Customers. Hide captionOver the next few years China will build a multi-billion dollar railway linking the Kenyan port of Mombasa to Nairobi (shown here), based on an agreement signed earlier this month by East African and Chinese officials. 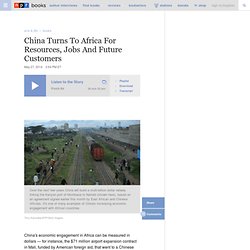 It's one of many examples of China's increasing economic engagement with African countries. Tony Karumba/AFP/Getty Images Over the next few years China will build a multi-billion dollar railway linking the Kenyan port of Mombasa to Nairobi (shown here), based on an agreement signed earlier this month by East African and Chinese officials. Explicit cookie consent. BY MAKING things and selling them to foreigners, China has transformed itself—and the world economy with it. 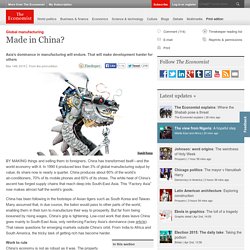 In 1990 it produced less than 3% of global manufacturing output by value; its share now is nearly a quarter. China produces about 80% of the world’s air-conditioners, 70% of its mobile phones and 60% of its shoes. The white heat of China’s ascent has forged supply chains that reach deep into South-East Asia. This “Factory Asia” now makes almost half the world’s goods. China has been following in the footsteps of Asian tigers such as South Korea and Taiwan.

Work to rule China’s economy is not as robust as it was. First, it is clinging on to low-cost manufacturing, even as it goes upmarket to exploit higher-value activities. Improving health care: Congratulations! Inoculations! Index. Is China's economy really the largest in the world? JENSEN, Utah: China’s hungry cattle feasting on alfalfa grown on Utah farm. JENSEN, Utah — It’s easy to find the largest Chinese-owned hay farm in the United States. 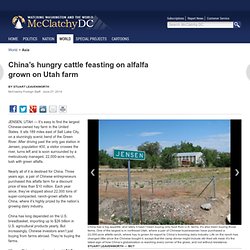 It sits 189 miles east of Salt Lake City, on a stunningly scenic bend of the Green River. After driving past the only gas station in Jensen, population 400, a visitor crosses the river, turns left and is soon surrounded by a meticulously managed, 22,000-acre ranch, lush with green alfalfa. Nearly all of it is destined for China. Three years ago, a pair of Chinese entrepreneurs purchased this alfalfa farm for a discount price of less than $10 million.

Each year since, they’ve shipped about 22,000 tons of super-compacted, ranch-grown alfalfa to China, where it’s highly prized by the nation’s growing dairy industry. China has long depended on the U.S. breadbasket, importing up to $26 billion in U.S. agricultural products yearly. Simon Wen Shao, a Chinese-born U.S. citizen who’s a co-owner of the Utah alfalfa farm, acknowledged that locals had acted warily when his company purchased the ranch. Mapping China's Economic Activity. In 2007, two U.S. citizens and a Hungarian launched a live video-streaming site called Ustream to help their military friends stationed in Iraq stay in touch with their families in the United States. They could never have predicted that seven years later, students in Taiwan who occupied the island's parliament starting on March 18 to protest the Cross-Strait Service Trade Agreement (CSSTA) with China would use Ustream's free service to bypass mainstream media and broadcast live coverage of the protests to viewers around the world.

Ustream has given protesters the ability to shape their message on their own terms. Longson Chang, an NGO worker at a Taiwanese human rights organization who entered the parliament with protesters on March 18, told Foreign Policy that he immediately thought of the platform because it was quick to set up an account and easy to use. Ustream has provided a functional medium for connecting protesters and netizens. Since the start of the occupation, Photo: J.

Nicaragua canal route: Atlantic-Pacific link unveiled. Shenzhen named as top 5 start-up hub, Hong Kong nowhere in sight. China's southern boomtown of Shenzhen could be the "Silicon Valley for hardware makers", according to a ranking of emerging start-up hubs around the world by well-respected US magazine Inc. Shenzhen, which neighbours Hong Kong, is already home to a number of major tech firms, including Chinese web giant Tencent, drone maker DJI, and smartphone manufacturer OnePlus. "[It is] a place where accelerators are eager to help you build, test, refine and make a million of something all in the same day," writes Greg Lindsay, author of Aerotropolis: The Way We'll Live Next. "Shenzhen is increasingly attracting startups that may have previously only outsourced their manufacturing here. It has become a global magnet for hardware companies eager to learn from the world's biggest (and often best) manufacturers of mainstream electronics.