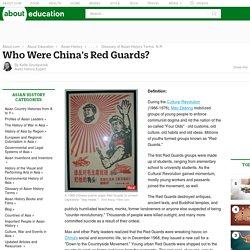 Millions of youths formed groups known as "Red Guards. " The first Red Guards groups were made up of students, ranging from elementary school to university students. As the Cultural Revolution gained momentum, mostly young workers and peasants joined the movement, as well. The Red Guards destroyed antiques, ancient texts, and Buddhist temples, and publicly humiliated teachers, monks, former landowners or anyone else suspected of being "counter-revolutionary. " Mao and other Party leaders realized that the Red Guards were wreaking havoc on China's social and economic life, so in December 1968, they issued a new call for a "Down to the Countryside Movement. 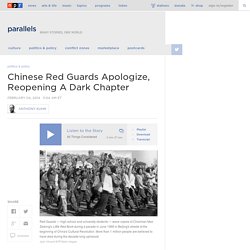 More than 1 million people are believed to have died during the decade-long upheaval. Jean Vincent/AFP/Getty Images. Mao's Great Leap Forward 'killed 45 million in four years' - News - Books. Speaking at The Independent Woodstock Literary Festival, Frank Dikötter, a Hong Kong-based historian, said he found that during the time that Mao was enforcing the Great Leap Forward in 1958, in an effort to catch up with the economy of the Western world, he was responsible for overseeing "one of the worst catastrophes the world has ever known". 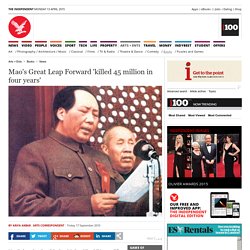 Mr Dikötter, who has been studying Chinese rural history from 1958 to 1962, when the nation was facing a famine, compared the systematic torture, brutality, starvation and killing of Chinese peasants to the Second World War in its magnitude. At least 45 million people were worked, starved or beaten to death in China over these four years; the worldwide death toll of the Second World War was 55 million. Mr Dikötter is the only author to have delved into the Chinese archives since they were reopened four years ago. He argued that this devastating period of history – which has until now remained hidden – has international resonance. Mao Zedong Biography. 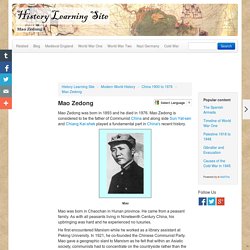 Mao Zedong is considered to be the father of Communist China and along side Sun Yat-sen and Chiang Kai-shek played a fundamental part in China's recent history. Mao Mao was born in Chaochan in Hunan province. He came from a peasant family. As with all peasants living in Nineteenth Century China, his upbringing was hard and he experienced no luxuries. He first encountered Marxism while he worked as a library assistant at Peking University. With Zhou Enlai, Mao established a revolutionary base on the border of Hunan. From 1937 to 1945, the enmity between the KMT and the Communists was put to one side as both concentrated their resources on the Japanese who had launched a full-scale invasion of China in 1937. By the spring of 1948, Mao switched from guerrilla attacks to full-scale battles.

He governed a country that was many years behind the world’s post-war powers. Cultural Revolution. The failure of the Great Leap Forward (1958-62) weakened Mao's position considerably in the Communist Party as factions began to form against him.  His sense that the party was shunting him aside probably lies behind his call for a Great Revolution to Create a Proletarian Culture, or Cultural Revolution for short. 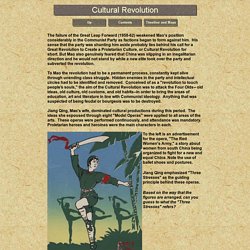 But Mao also genuinely feared that China was slipping in an inegalitarian direction and he would not stand by while a new elite took over the party and subverted the revolution. To Mao the revolution had to be a permanent process, constantly kept alive through unending class struggle. Hidden enemies in the party and intellectual circles had to be identified and removed. NThe Cultural Revolution. The Great Leap Forward. Cultural Revolution. 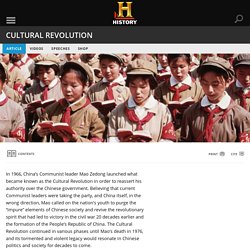 In 1972, however, Mao suffered a stroke; in the same year, Zhou learned he had cancer. The two leaders threw their support to Deng Xiaoping (who had been purged during the first phase of the Cultural Revolution), a development opposed by the more radical Jiang and her allies, who became known as the Gang of Four.

In the next several years, Chinese politics teetered between the two sides. The radicals finally convinced Mao to purge Deng in April 1976, a few months after Zhou’s death, but after Mao died that September, a civil, police and military coalition pushed the Gang of Four out. Deng regained power in 1977, and would maintain control over Chinese government for the next 20 years. Some 1.5 million people were killed during the Cultural Revolution, and millions of others suffered imprisonment, seizure of property, torture or general humiliation.