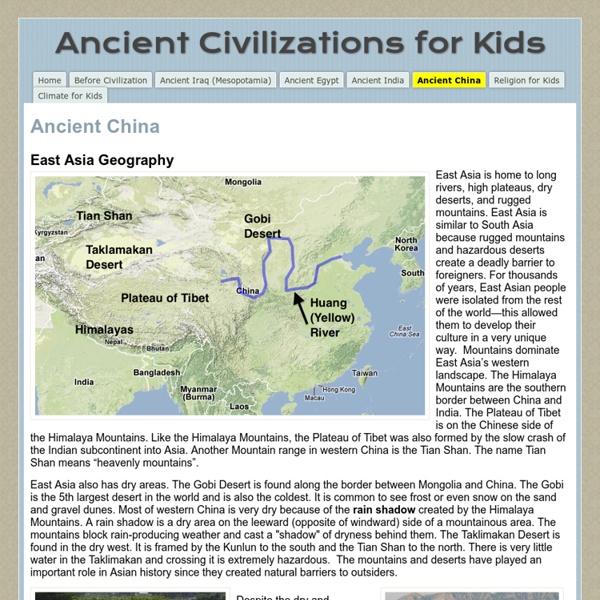 East Asia also has dry areas. The Gobi Desert is found along the border between Mongolia and China. The Gobi is the 5th largest desert in the world and is also the coldest. It is common to see frost or even snow on the sand and gravel dunes. Most of western China is very dry because of the rain shadow created by the Himalaya Mountains. A rain shadow is a dry area on the leeward (opposite of windward) side of a mountainous area. Despite the dry and mountainous terrain of East Asia, there are some low plains suitable for early civilization. Heavy summer rains and snowmelt support 2 large river systems in East Asia. East Asia has many different climate types. Early History Humans probably reached East Asia between 30,000 and 50,000 years ago. Ancient China It is difficult to be sure about China’s early ancient history. The Zhou Dynasty (1046 BCE-256 BCE) lasted longer than any other dynasty in Chinese history. Agriculture was usually directed by the government. Dynasty.

Ancient Chinese Civilization 1 click Chinese Historical Accounts the Forbidden City, the home of the Chinese emperors until the last dynasty was overthrown in the 20th century Chinese history, until the twentieth century, was written mostly by members of the ruling scholar-official class and was meant to provide the ruler with precedents to guide or justify his policies. These accounts focused on dynastic politics and colorful court histories and included developments among the commoners only as backdrops. The historians described a Chinese political pattern of dynasties, one following another in a cycle of ascent, achievement, decay, and rebirth under a new family. Ancient China banner - Syllabus links The physical features of the ancient society and how they influenced the civilisation that developed there (ACDSEH006, ACDSEH005) Students: describe the geographical setting and natural features of the ancient society explain how the geographical setting and natural features influenced the development of the ancient society Roles of key groups in the ancient society in this period (such as kings, emperors, priests, merchants, craftsmen, scholars, peasants, women), including the influence of law and religion (ACDSEH044, ACDSEH041) outline the main features of the social structures and government of the ancient society, including the role of law and religion describe the roles of key groups in the society describe the everyday life of men, women and children in the society

China History: Chronology, Dynasty Qin Han Tang Song Yuan Ming Qing China, one of the countries that can boast of an ancient civilization, has a long and mysterious history - almost 5,000 years of it! Like most other great civilizations of the world, China can trace her culture back to a blend of small original tribes which have expanded till they became the great country we have today. It is recorded that Yuanmou man is the oldest hominoid in China and the oldest dynasty is Xia Dynasty. From the long history of China, there emerge many eminent people that have contributed a lot to the development of the whole country and to the enrichment of her history. The Real Reason America Used Nuclear Weapons Against Japan. It Was Not To End the War Or Save Lives. Like all Americans, I was taught that the U.S. dropped nuclear bombs on Hiroshima and Nagasaki in order to end WWII and save both American and Japanese lives. But most of the top American military officials at the time said otherwise. The U.S. Strategic Bombing Survey group, assigned by President Truman to study the air attacks on Japan, produced a report in July of 1946 that concluded (52-56):

Chinese Geography: Readings and Maps Rivers, Borders and Civilization Major Rivers China's two major rivers, the Huang He (Yellow River) and the Chang Jiang (Yangzi or Yangtze River), as well as the Pearl River (Zhu Jiang) delta system marked by the Xi Jiang (West River) in southeastern China, have provided the framework for agricultural development and population growth throughout China's history. Finland Will Become The First Country In The World To Get Rid Of All School Subjects In an era of technology and easily accessible information, our schools still expect from us to know everything from the books, without considering whether this is going to be what we will actually need in our professional development. How many times have you wondered if you were going to need subjects you were made to learn because the curriculum said so? Finland has decided to change this in their educational system and introduce something which is suitable for the 21st century. By 2020, instead of classes in physics, math, literature, history or geography, Finland is going to introduce a different approach to life through education.

The First Women Warriors on Horseback Scythian women were kicking butt and taking names from the 7th century BC to the 2nd century AD. Source: CAIS The Scythians migrated from central Asia to southern Russia, centering over the present day Crimean peninsula, in the 8th and 7th centuries BC. The tribe was artistic, violent, and comprised entirely of excellent horse riders.

East India Company - Once world’s most powerful corporation 2 clicks It was the most powerful multinational corporation the world had ever seen. Founded in 1600, the English East India Company’s power stretched across the globe from Cape Horn to China. The company was established for trading, with a royal charter by Queen Elizabeth I granting it a monopoly over business with Asia. Imagine a company with the influence of Google or Amazon, granted a state-sanctioned monopoly and the right to levy taxes abroad But the Company’s influence went further. china Power Point Presentations on China! Welcome! On this page you will find free powerpoints that you can use in your classroom about china. these powerpoints provide great visuals and can be modified to meet your needs. great for roots!;)

8 Mistakes I Made as a Mom of an Autistic Child The car pulls up, you seem in a delighted mood to go shopping and get all the things you need for the week to come, but you know your limits. The car park is suspiciously busy. You think to yourself, “Is this for the shop or just for town parking?”

10 Ways We're All Picturing The Ancient World Incorrectly Thanks to countless books, movies, and trashy TV shows, most of us have a fairly firm mental image of the ancient world. Togas, feasting, gladiatorial combat . . . the standard stuff. Yet step back in time, and you’d be confronted with a world that confounded your expectations. Far from being a close approximation of the truth, our collective mental image of the ancient world may be nothing like reality at all. 10Ancient Britain Had African Citizens

China: Surviving the Camps by Zha Jianying By now, it has been nearly forty years since the Cultural Revolution officially ended, yet in China, considering the magnitude and significance of the event, it has remained a poorly examined, under-documented subject. Official archives are off-limits. Serious books on the period, whether comprehensive histories, in-depth analyses, or detailed personal memoirs, are remarkably few. Ji Xianlin’s The Cowshed: Memories of the Chinese Cultural Revolution, which has just been released in English for the first time, is something of an anomaly. At the center of the book is the cowshed, the popular term for makeshift detention centers that had sprung up in many Chinese cities at the time. This one was set up at the heart of the Peking University campus, where the author was locked up for nine months with throngs of other fallen professors and school officials, doing manual labor and reciting tracts of Mao’s writing.