Afghanistan - Education for All Report. Education in Afghanistan – the Good, the Bad and the Ugly. By Shelly Kittleson (kabul)Wednesday, June 26, 2013Inter Press Service KABUL, Jun 26 (IPS) - Despite impressive advancements in enrolment rates, media reports of gas attacks on girls' schools, shoddy books, and a lack of classroom facilities continue to mar the reputation of the education system in Afghanistan. 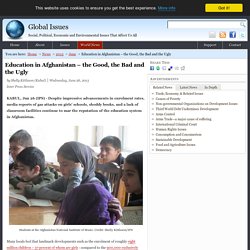 Students at the Afghanistan National Institute of Music. Breaking the cycle report 2015. Expanding Opportunities for Education in Kabul. Year by year, the students are increasing and school improvements are also happening. 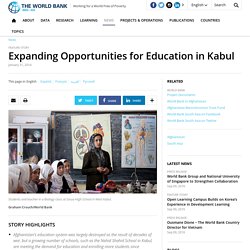 The changes have been good but it is still very difficult for us,” says Bahadari. The transformation has been dramatic. In 2001, the place was known as ‘the burned school,’ because it was largely destroyed by conflict in the area, she says. The Benefits of Education. United Nations Official Document. Acid attacks: What Afghan girls risk by going to school. "People are crazy," said Razia Jan, founder of a girls' school outside Kabul. 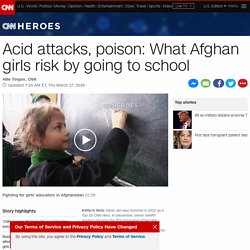 "The day we opened the school, (on) the other side of town, they threw hand grenades in a girls' school, and 100 girls were killed. "It is heartbreaking to see the way these terrorists treat ... women," said Jan, 68. "In their eyes, a women is an object that they can control. They are scared that when these girls get an education, they will become aware of their rights as women and as a human being. " Aid Afghanistan for Education. Attack on Afghani Children. Children, Not Soldiers: Afghanistan Fact Sheet The information below is based on the Report of the Secretary-General on children and armed conflict (A/70/836–S/2016/360) issued on 20 April 2016. 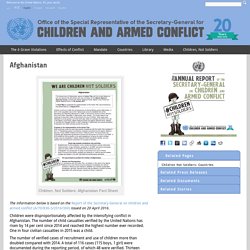 Children were disproportionately affected by the intensifying conflict in Afghanistan. The number of child casualties verified by the United Nations has risen by 14 per cent since 2014 and reached the highest number ever recorded. One in four civilian casualties in 2015 was a child. The number of verified cases of recruitment and use of children more than doubled compared with 2014. Enhancement of Literacy in Afghanistan (ELA) program. Enhancement of Literacy in Afghanistan (ELA) program Afghanistan has one of the lowest literacy rates in the world, currently estimated at about 31% of the adult population (over 15 years of age). 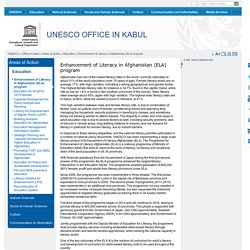 Female literacy levels are on average 17%, with high variation, indicating a strong geographical and gender divide. The highest female literacy rate, for instance is 34.7%, found in the capital, Kabul, while rate as low as 1.6% is found in two southern provinces of the country.. World's Children's Prize - “Why can’t girls go to school?” “My heart burned for my people. 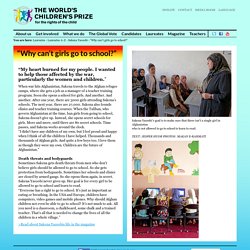 I wanted to help those affected by the war, particularly the women and children.” When war hits Afghanistan, Sakena travels to the Afghan refugee camps, where she gets a job as a manager of a teacher training program. No school for almost half of Afghan children. KABUL: Almost half of school-age children in Afghanistan do not have access to education, President Hamid Karzai said Saturday as he inaugurated the new school year. 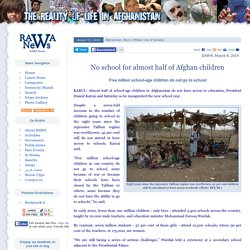 Eight years since the repressive Taliban regime was overthrown, 42 per cent children still do not attend or have access to schools. (Photo: RFE/RL) Afghan girls risk their lives to go to secret school. In a small, sunlit room last week, 20 little girls seated on rush mats sketched a flower drawn on the blackboard. 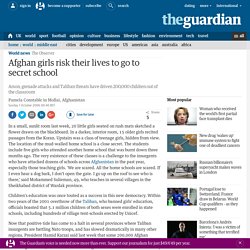 In a darker, interior room, 15 older girls recited passages from the Koran. Upstairs was a class of teenage girls, hidden from view. The location of the mud-walled home school is a close secret. Girls Education Problems in Afghanistan - School of Leadership, Afghanistan. Education in Afghanistan. History[edit] One of the oldest schools in Afghanistan is the Habibia High School in Kabul, which was built by King Habibullah Khan in 1903 to educate students from the nation's elite class. 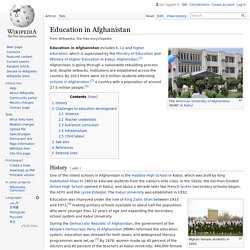 In the 1920s, the German-funded Amani High School opened in Kabul, and about a decade later two French lycées (secondary schools) began, the AEFE and the Lycée Esteqlal. The Kabul University was established in 1932. Afghan female students in 2002. Brookings. Education - Afghanistan - average, system. Photo by: Oleksandr Rozhkov Adult illiteracy for the year 2002 for males was 49%; females, 79%. 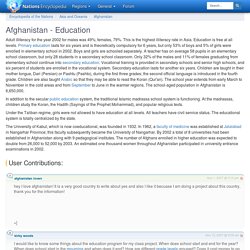 This is the highest illiteracy rate in Asia. Education is free at all levels. Primary education lasts for six years and is theoretically compulsory for 6 years, but only 53% of boys and 5% of girls were enrolled in elementary school in 2002. Afghan Woman Who Once Went to School in Disguise Opens Boarding School for Girls. When Shabana Basij-Rasikh was a child, she dressed up like a boy to walk to school in Taliban-held Afghanistan. Now 24, she is once again defying the odds in her country—this time in her drive to develop an internationally accredited boarding school for girls. Afghanistan has seen vast improvements in education. There are more than 14,000 educational institutions, and a national curriculum has been established after 30 years of conflict. Afghan School. UNICEF Afghanistan - Education - Basic education and gender equality. Basic education and gender equality Education Under the Taliban, violence and intimidation were used to prevent girls and women from attending school.

After the regime’s fall in 2001, UNICEF became the Government’s leading partner in the reconstruction of the education sector, a relationship that continues today. On 24 March 2002, at the start of the Afghan New Year and only three months after the interim government was created, three million Afghan children (one third of them girls) gained access to 3,000 schools across Afghanistan with the support of UNICEF led Back-to-School-Campaign. Many of these children were entering a formal classroom for the first time in six years. Since then, education in Afghanistan has witnessed tremendous gains. Number of Afghani Children in Primary School. UNHCR chief calls for inclusive education for all including Afghan refugees. PESHAWAR: The United Nations High Commissioner for Refugees Filippo Grandi has urged the international community to invest more in youth empowerment and education. He said that the current emergencies have increased global concern about the additional risks faced by children who do not have access to educational opportunities.

The high commissioner noted that protracted refugee-hosting countries need additional support for education. “Emphasis on education particularly becomes vital at a time when children below the age of 18 constitute 51 per cent of the total 65.3 million globally displaced people,” he said at the occasion of the inauguration ceremony of a Government Girls Primary School in Daad Behsud, Nowshera on Thursday. The UNHCR rehabilitated the existing structure of school through German funding and constructed eight additional classrooms, toilets, and overhauling of the entire building, provision of furniture, sports goods and aid kits. Afghanistan. Three decades of conflict devastated Afghanistan’s education systems and institutions.

In 2002, an estimated 900,000 boys attended school, while women and girls were almost completely excluded from educational opportunities. Since then, the Afghan government, USAID, and international donors have worked closely to rebuild Afghanistan’s education sector. The Ministry of Education, with support from USAID and other donors, has built more than 13,000 schools, recruited and trained more than 186,000 teachers, and increased net enrollment rates for school-aged children past 56 percent.

Today, more than 8 million students are enrolled in school, including more than 2.5 million girls. Education in Afghanistan — Razia's Ray of Hope. Public education is a relatively recent concept in Afghanistan. It wasn't until 1969 that the Afghan government legislated free, mandatory education for children between the ages of 7 and 15. Unfortunately, the provision of schools, teachers, and books lagged far behind the legislation.