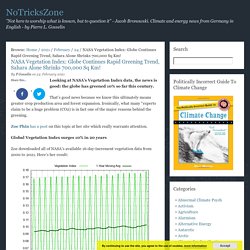 That’s good news because we know this ultimately means greater crop production area and forest expansion. Ironically, what many “experts claim to be a huge problem (CO2) is in fact one of the major reasons behind the greening. Zoe Phin has a post on this topic at her site which really warrants attention. Global Vegetation Index surges 10% in 20 years Zoe downloaded all of NASA’s available 16-day-increment vegetation data from 2000 to 2021. NASA’s Vegetation Index has risen from 0.0936 to 0.1029, which is a 9.94% increase. New NASA satellite data prove carbon dioxide is still GREENING the Earth.

By Paul Homewood Satellite data shows the per cent amount that foliage cover has changed around the world from 1982 to 2010. 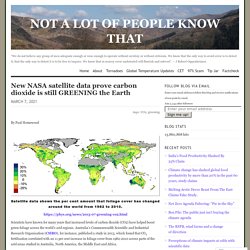 Scientists have known for many years that increased levels of carbon dioxide (CO2) have helped boost green foliage across the world’s arid regions. Australia’s Commonwealth Scientific and Industrial Research Organisation (CSIRO), for instance, published a study in 2013, which found that CO2 fertilisation correlated with an 11 per cent increase in foliage cover from 1982-2010 across parts of the arid areas studied in Australia, North America, the Middle East and Africa. They explain: The fertilisation effect occurs where elevated CO2 enables a leaf during photosynthesis, the process by which green plants convert sunlight into sugar, to extract more carbon from the air or lose less water to the air, or both.

If elevated CO2 causes the water use of individual leaves to drop, plants in arid environments will respond by increasing their total numbers of leaves. Another New Study Says Warming And CO2-Induced Greening Leads To COOLING Of Land Surface Temperatures – Watts Up With That? From the NoTricksZone By Kenneth Richard on 21. 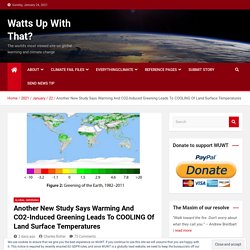 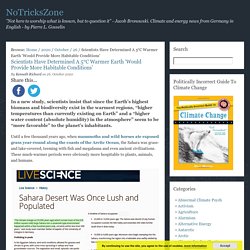 October 2020 In a new study, scientists insist that since the Earth’s highest biomass and biodiversity exist in the warmest regions, “higher temperatures than currently existing on Earth” and a “higher water content (absolute humidity) in the atmosphere” seem to be “more favorable” to the planet’s inhabitants. Until a few thousand years ago, when mammoths and wild horses ate exposed grass year-round along the coasts of the Arctic Ocean, the Sahara was grass- and lake-covered, teeming with fish and megafauna and even ancient civilizations. 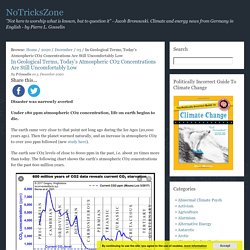 December 2020 Disaster was narrowly averted Under 180 ppm atmospheric CO2 concentration, life on earth begins to die. The earth came very close to that point not long ago during the Ice Ages (20,000 years ago). Then the planet warmed naturally, and an increase in atmospheric CO2 to over 200 ppm followed (new study here). The earth saw CO2 levels of close to 8000 ppm in the past, i.e. about 20 times more than today. Today, thanks in large part to mankind, concentrations have risen to over 400 ppm, yet historically this remains at the very low end of the scale compared to the thousands of ppm seen naturally earlier in history. 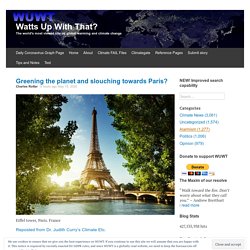 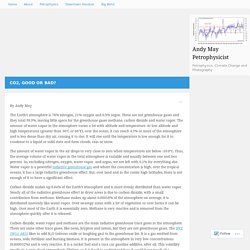 These are not greenhouse gases and they total 99.9%, leaving little space for the greenhouse gases methane, carbon dioxide and water vapor. The amount of water vapor in the atmosphere varies a lot with altitude and temperature. Earth Is Greening Due To Rising CO2…A Growing Greening Sink Offsets 17 Years Of Equivalent CO2 Emissions By 2100. By Kenneth Richard on 19. 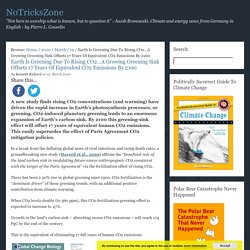 Maximum CO2 diffusion inside leaves is limited by the scaling of cell size and genome size. 23 Million Year Old Fossilized Leaves Offer Proof of CO2 to Greening the Planet link. From the we told you so department. 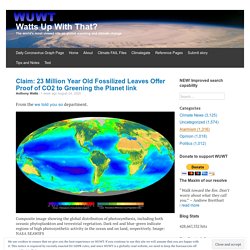 The links between rising carbon dioxide levels, and greening trends have been supposedly confirmed by fossilized leaves from a 23 million-year-old forest. Researchers previously postulated that ancient increases in atmospheric CO2 during the early Miocene allowed plants to perform photosynthesis more efficiently. But the latest research, published last Thursday in the journal Climate of the Past, is said to confirm the link between CO2 and greening in the fossil record.

This is something NASA satellites have already observed in the modern-day era. Human Activity in China and India Dominates the Greening of Earth, NASA Study Shows. New research highlights how plants are slowing global warming. News Release 31-Jan-2020 Boston University Chi Chen, a Boston University graduate researcher, and Ranga Myneni, a BU College of Arts & Sciences professor of earth and environment, released a new paper that reveals how humans are helping to increase the Earth’s plant and tree cover, which absorbs carbon from the atmosphere and cools our planet. 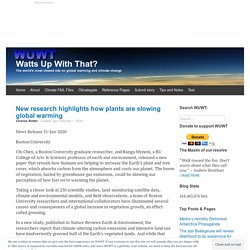 The boom of vegetation, fueled by greenhouse gas emissions, could be skewing our perception of how fast we’re warming the planet. Taking a closer look at 250 scientific studies, land-monitoring satellite data, climate and environmental models, and field observations, a team of Boston University researchers and international collaborators have illuminated several causes and consequences of a global increase in vegetation growth, an effect called greening. Green leaves convert sunlight to sugars while replacing carbon dioxide in the air with water vapor, which cools the Earth’s surface.

Global greening is happening faster than climate change, and it’s a good thing. By Matt Ridley, writing in Die Weltwoche REJOICE IN THE LUSH GLOBAL GREENING CO2 is plant food. The greening of the earth means more food for animals and greater crop yields for humans. Why is no one talking about it? Amid all the talk of an imminent planetary catastrophe caused by emissions of carbon dioxide, another fact is often ignored: global greening is happening faster than climate change. New Paper: CO2 Rise + Warming Are 91% Responsible For The Earth’s Accelerated Greening Trend Since 1990. By Kenneth Richard on 12.

August 2019 Satellite observations indicate the Earth has become much greener in recent decades. According to scientists, the overwhelming majority of the “significant increases in tropical forests and the forests of North America, Eurasia, and China” since the early 1990s can be attributed to the combination of CO2 fertilization (56%) and climate change (35%). Image Source: O’Sullivan et al., 2019 O’Sullivan et al., 2019 “The recent warming hiatus (1998–2013) was identified as a potential key mechanism behind the increased land sink during this period via reduced ecosystem respiration (Ballantyne et al., 2017).” How plants are working hard for the planet. Alarmists Red-Faced As Satellite Image Analyses Show Globe Has Greened Markedly Over Past 4 Decades.

German climate science skeptic Michael Kruger of Science Skeptical here writes that the earth has become GREENER and more fertile due to more CO2 and warming. Source: Zhu et al Hard to believe, but the earth is not turning into a desert and more arid due to the CO2 increase in the atmosphere, like alarmist scientists and media like us to believe it is, but rather it is becoming greener and more fertile. This is what scientists have found through the analysis of satellite data over the last four decades. New Study: The Recent CO2 Increase Has Had An Even Greater Earth-Greening Impact Than Previously Thought.

The Earth has been rapidly greening in recent decades, and CO2 fertilization may explain 70% of the trend (Zhu et al., 2016). A new study finds models have significantly underestimated the greening effect of rising CO2. Image Source: Winkler et al., 2019 CO2 is a pollutant? In recent years, carbon dioxide (CO2), an essential ingredient in plants’ food-making processes (photosynthesis), has been unscientifically cast as a villainous pollutant. This colloquial development has been fomented by climate activists like Dr. China, India Lead The Way In Global Greening. A new study shows that China and India—the world’s most populous countries—are leading the increase in greening on land. The most amazing greening on Earth.

Plant responses to low [CO2] of the past - Gerhart - 2010 - New Phytologist. More Evidence that FACE Studies Underestimate the Positive Impacts of CO2 Enrichment on Plant Growth.