Social media. What goes through a policeman's head before he shoots. Police shootings have made headlines in the US this summer. 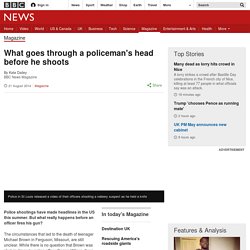 But what really happens before an officer fires his gun? The circumstances that led to the death of teenager Michael Brown in Ferguson, Missouri, are still unclear. While there is no question that Brown was shot six times by police officer Darren Wilson, there are conflicting stories about circumstance that lead to Wilson pulling the trigger. Was he overzealously shooting at a supplicant Brown, who was unarmed? Or was he defending himself against a violent attack from the 6ft 4in (1.93m) 18 year old? When it comes to US police officers firing their weapons, the rules - on paper - are very clear.

"Ultimately you come to your firearm as a last resort," says Jim Pasco, executive director of the National Fraternal Order of Police. Why do US police keep killing unarmed black men? Image copyright Getty Images Recent high-profile cases of unarmed black men dying at the hands of the US police have sparked protests and civil unrest in several American cities. 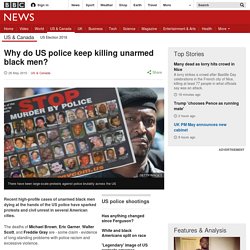 The deaths of Michael Brown, Eric Garner, Walter Scott, and Freddie Gray are - some claim - evidence of long-standing problems with police racism and excessive violence. Four expert witnesses talk to the BBC World Service Inquiry programme, including the head of President Obama's taskforce on police reform, Charles Ramsey. Sam Sinyangwe: These are not isolated incidents. How Black Lives Matter Uses Social Media to Fight the Power. Any large social movement is shaped by the technology available to it and tailors its goals, tactics, and rhetoric to the media of its time. 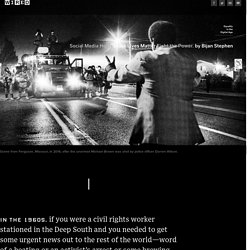 On the afternoon of Sunday, March 7, 1965, when voting-rights marchers in Selma, Alabama, were run down by policemen at the Edmund Pettus Bridge, the WATS lines were in heavy use. (“Here come the white hoodlums,” an activist said from a corner pay phone at 3:25 pm.) But the technology that was most important to the movement’s larger aims was not in activists’ hands at all: It was in a set of film canisters being ferried past police blockades on Highway 80 by an ABC News TV crew, racing for the Montgomery airport and heading to New York for an evening broadcast.

That night, 48 million Americans would watch the scene in their living rooms, and a few days later Martin Luther King Jr. would lay bare the movement’s core media strategy. Obama Urges Civil Rights Activists and Police to Bridge Divide. Photo Washington — said on Wednesday that the profound tensions between the police and African-American communities were likely to worsen “for quite some time” after the series of wrenching shooting deaths this month, urging law enforcement officials and civil rights activists at a lengthy and at times tense White House gathering to keep pressing to bridge their differences. 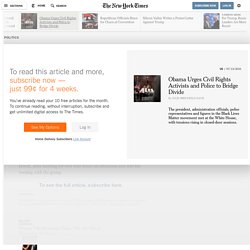 “Not only are there very real problems but there are still deep divisions about how to solve these problems,” Mr. Obama said at the White House, after meeting for over four hours all afternoon and into the evening with the group. “There is no doubt that police departments still feel embattled and unjustly accused, and there is no doubt that minority communities, communities of color, still feel like it just takes too long to do what’s right,” Mr. Obama added. “We’re not even close to being there yet,” the president said, adding that it will take time to achieve such trust. Mr. Mr. Five Dallas Officers Were Killed as Payback, Police Chief Says. US race relations: Six surprising statistics. A white gunman shot dead nine people in an African-American church in the city of Charleston on 17 June, police say, two months after an unarmed black man was killed by a white police officer in North Charleston. 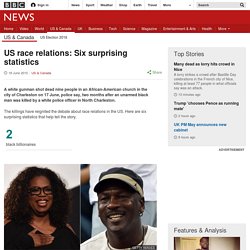 The killings have reignited the debate about race relations in the US. Here are six surprising statistics that help tell the story. Image copyright Getty Images There are only two black billionaires in the US - chat show host Oprah Winfrey and former basketball star Michael Jordan. This compared with about 500 white billionaires. Black students appear to do well in high school - just over 30% of over-25s have a diploma, compared with 27% of white over-25s. 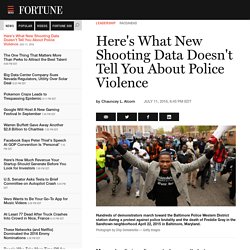 All rights reserved. Fortune.com is a part of the Time.com network of sites. Powered by WordPress.com VIP Email address or Password is incorrect Forgot Password? Why Aren't Police Held Accountable for Shooting Black Men? Two years ago, when the top prosecutor in Ferguson, Missouri, ruled a white officer was justified in shooting an unarmed black teenager, spurring days of unrest, Black Lives Matter activists – irate at yet another systemic failure to hold police accountable for an African-American's death – called on the federal government to investigate the case. 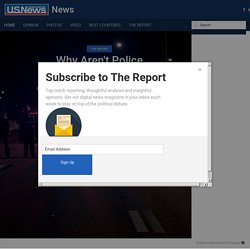 Instead of the justice they and others demanded, however, the feds delivered another bitter pill: No criminal charges against Darren Wilson for fatally shooting Michael Brown, 18. The Most Heinous Right-Wing Reactions to Dallas Massacre. While the shooting of 12 police officers at a Dallas Black Lives Matter protest has ratcheted up the rhetoric on all sides, some of the worst reactions have come from the right. 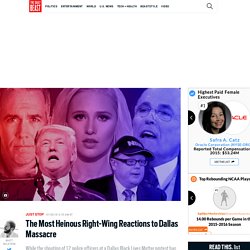 Over the past several years, numerous police killings of unarmed black men have fueled a growing outrage that ultimately gave birth to the Black Lives Matter movement. This week, a lone gunman used that movement as a platform to shoot 12 police officers in Dallas, killing five of them and, in turn, altering the conversation around the relationship between people of color and cops.

Apparently, now is time for a group of older, white, conservative men to be outraged. The Counted: people killed by police in the United States – interactive.