The war on aid: the hidden battle inside Priti Patel’s own department. Global Health Check.

WHO and global governance

Suchita Shah: The lost brigade—why diasporas matter to global health – The BMJ. Reflections on the second UK-East African Healthcare Summit, London 2017 Talk of nations, national borders, and national identities has become a part of the ideological foreplay that inevitably leads up to big political events. 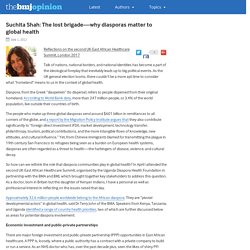 As the UK general election looms, there couldn’t be a more apt time to consider what “homeland” means to us in the context of global health. Diaspora, from the Greek “diaspeirein” (to disperse), refers to people dispersed from their original homeland. According to World Bank data, more than 247 million people, or 3.4% of the world population, live outside their countries of birth. Cambodian female workers in Nike, Asics and Puma factories suffer mass faintings. Women working in Cambodian factories supplying some of the world’s best-known sportswear brands are suffering from repeated mass faintings linked to conditions. 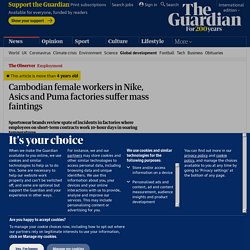 Over the past year more than 500 workers in four factories supplying to Nike, Puma, Asics and VF Corporation were hospitalised. The most serious episode, recorded over three days in November, saw 360 workers collapse. The brands confirmed the incidents, part of a pattern of faintings that has dogged the 600,000-strong mostly female garment workforce for years. The Observer and Danwatch, a Danish investigative media group, interviewed workers, unions, doctors, charities and government officials in the country’s garment industry, worth $5.7bn in 2015. The women who collapsed worked 10 hour days, six days a week and reported feeling exhausted and hungry. According to unions, short-term contracts – common for workers in three of the factories – were also a key source of stress and exhaustion.

Econometrics of suffering: Health policy, economics & human life — GLOBAL HEALTH GOVERNANCE PROGRAMME. Econometrics is the application of statistical and mathematical methods in the field of economics to describe the numerical relationships between key economic forces such as capital, interest rates and labour. 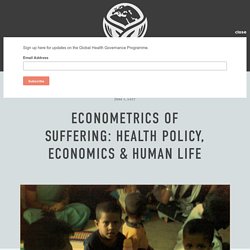 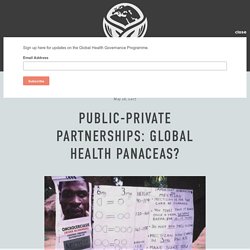 Much of this record-high treatment has been accomplished through mass-drug administration with drugs donated from pharmaceutical companies, in partnership with the WHO. In current WHO Director General Margaret Chan’s words, such public-private partnerships (PPPs) ‘bring science to bear on the most neglected diseases’. In fact, the WHO report boldly states that the sustainable development goals (SDGs) ‘can be realized only’ through ‘strong commitments’ to global partnerships between governments, the private sector, and civil society. 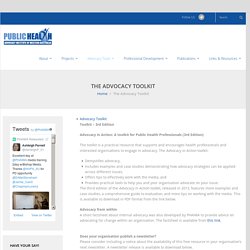 The Advocacy in Action toolkit:Demystifies advocacy,Includes examples and case studies demonstrating how advocacy strategies can be applied across different issues,Offers tips to effectively work with the media, andProvides practical tools to help you and your organisation advocate on your issue.The third edition of the Advocacy in Action toolkit, released in 2013, features more examples and case studies, a comprehensive guide to evaluation, and more tips on working with the media. 'Screen-and-treat' scheme for hepatitis B may prevent deadly complications. Theconversation. Eating more fruit and vegetables and cutting back on red and processed meat will make you healthier. 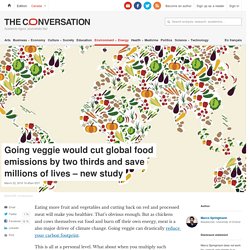 That’s obvious enough. But as chickens and cows themselves eat food and burn off their own energy, meat is a also major driver of climate change. Going veggie can drastically reduce your carbon footprint. This is all at a personal level. GetSharedSiteSession?rc=4&redirect= Cleaning up the herbal healers. “I have four leading brands, but the one that moves like water is Venecare.” 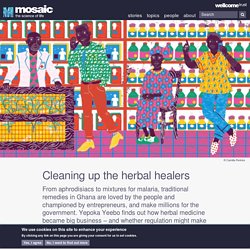 Theodore Tetteh is founder of the Tinatett Herbal company. “Anything that has got to do with sexually transmitted disease – but not HIV – it takes care of it, just like that.” It also takes care of the pain men sometimes feel when they urinate, he says, sounding increasingly evangelical. News and views in healthy development. How the genomics revolution could finally help Africa. Nana Kofi Acquah The genomes of Africans and people of recent African descent house a huge amount of diversity that scientists have only begun to explore. 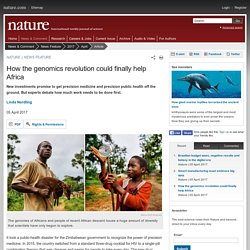 It took a public-health disaster for the Zimbabwean government to recognize the power of precision medicine. In 2015, the country switched from a standard three-drug cocktail for HIV to a single-pill combination therapy that was cheaper and easier for people to take every day. The new drug followed a World Health Organization recommendation to incorporate the antiretroviral drug efavirenz as a first-line therapy for public-health programmes. THE WORLD BANK AND GLOBAL HEALTH. Why China Could be a Game Changer for Global Health. With its growing international integration, China is becoming a major actor in global health issues. 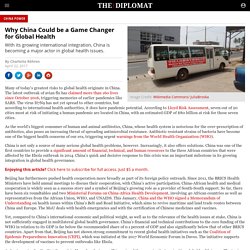 By Charlotte Röhren for The Diplomat April 22, 2017 Many of today’s greatest risks to global health originate in China. The latest outbreak of avian flu has claimed more than 160 lives since October 2016, triggering memories of earlier pandemics like SARS. The virus H7N9 has not yet spread to other countries, but according to international health authorities, it does have pandemic potential. So, what is the World Bank’s business model? — GLOBAL HEALTH GOVERNANCE PROGRAMME. Another widespread view of the Bank holds that it consists only of the International Bank for Reconstruction and Development (IBRD) and the International Development Association (IDA) (also figure 1). 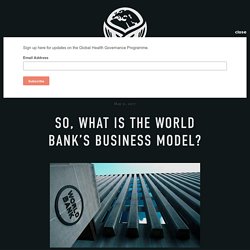 This is not least the case because these two institutions “share the same country-based business model and operational policies”[vii]. Let’s look at the IBRD first. It can technically be considered a “not for profit organisation” as its explicitly stated objective is not to maximize financial proceeds “but [only] to earn adequate income to ensure its financial strength and sustain its development activities”[viii]. Theconversation. In the three decades following World War II it became an almost universal belief of nutritional scientists that protein deficiency was the most serious and widespread dietary deficiency in the world.

Improving protein nutrition became a high priority for UN agencies, such as the Food and Agriculture Organisation. This problem was perceived to be so serious and widespread that in many developing countries most children were thought to suffer some degree of protein malnutrition – a condition the medical establishment called “kwashiorkor”. (Kwashiorkor is a word from the Ga language of West Africa that means “the disease of the deposed child”.) For several decades, protein was a major teaching and research focus in human nutrition. IDMC Grid 2016 - Global Report on Internal Displacement. Conflict, violence and disasters internally displaced 27.8 million people in 2015, subjecting a record number of men, women and children to the trauma and upheaval of being forcibly displaced within their own country.

"This is the equivalent of the combined populations of New York City, London, Paris and Cairo grabbing what they can carry, often in a state of panic, and setting out on a journey filled with uncertainty," said Jan Egeland, the Secretary General of the Norwegian Refugee Council (NRC). "Put another way, around 66,000 people abandoned their homes every day of 2015. " Today, NRC's Internal Displacement Monitoring Centre (IDMC) publishes its new Global Report on Internal Displacement (GRID 2016), marking a breakthrough for IDMC as it synthesizes all of its reporting on global internal displacement into one report. If 100 people lived on earth. Life expectancy increased by 5 years since 2000, but health inequalities persist. Digital Principles. On the equal validity of methods in Global Health research — GLOBAL HEALTH GOVERNANCE PROGRAMME. By Felix Stein Students and investigators of Global Health may frequently feel a little lost as to which methods to employ in their research.

Should they track the finances of major Global Health organisations or measure treatment success wherever this money is used? Should participant observation be the method of choice or will quantitative analyses yield more relevant results? Should they conduct clinical trials to assess the latest advances in medical research, or may it be preferable to leave the laboratory to observe medical practice in applied settings?

These questions are all the more difficult to answer since the field of Global Health itself is highly heterodox, combining several areas of study, various objects of interest and greatly divergent epistemic traditions. What is public health? Some reflections for teaching – #ScotPublicHealth. From time to time I am asked to explain Public Health to students, colleagues from other disciplines or a more general audience. A traditional approach might be to structure such a session around the three domains of Public Health (health improvement, health protection, quality improvement), building on specific examples:

Uprooted by war, Syrian mother gets help to beat depression.