Careers. We are builders, makers, and entrepreneurs; equal parts strategists and storytellers, anthropologists and economists; designers, technologists, and political scientists. 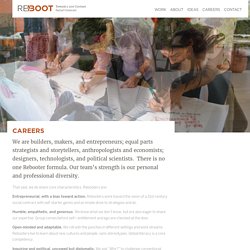 There is no one Rebooter formula. Our team’s strength is our personal and professional diversity. That said, we do share core characteristics. Rebooters are: Entrepreneurial, with a bias toward action. We Are All Magical. GroundTruth Initiative. » GroundTruth in Dar es Salaam: Six Lessons for Effective Feedback Loops GroundTruth Initiative. Closing the Gap with Decision Makers I was recently in Dar es Salaam, Tanzania, examining the potential for a “feedback loop” in some of the regions where GroundTruth has worked, particularly in Tandale, and Keko Machungwa, two informal settlements. 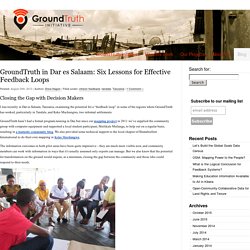 GroundTruth hasn’t had a formal program running in Dar, but since our mapping project in 2011 we’ve supplied the community group with computer equipment and supported a local student participant, Msilikale Msilanga, to help out on a regular basis, resulting in a fantastic community blog. We also provided some technical support to the local chapter of Slumdwellers International to do their own mapping in Keko Machungwa. The information outcomes in both pilot areas have been quite impressive—they are much more visible now, and community members can work with information in ways that it’s usually assumed only experts can manage. In each community, we came up with a target issue that they wanted to work on through reporting/mapping. 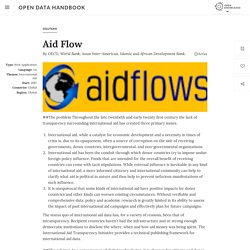 International aid, while a catalyst for economic development and a necessity in times of crisis is, due to its opaqueness, often a source of corruption on the side of receiving governments, donor countries, intergovernmental, and non-governmental organizations. International aid has been the conduit through which donor countries try to impose undue foreign policy influence. Funds that are intended for the overall benefit of receiving countries can come with tacit stipulations.

Supporting sustainable development with open data. In 2015, the United Nations will gather governments, civil society groups and international NGOs from around the world to decide on global development priorities for the next 15 years. 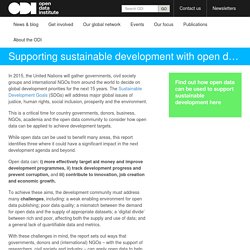 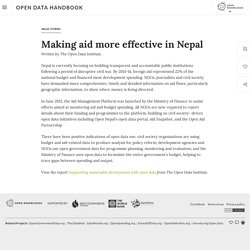 By 2013-14, foreign aid represented 22% of the national budget and financed most development spending. NGOs, journalists and civil society have demanded more comprehensive, timely and detailed information on aid flows, particularly geographic information, to show where money is being directed. In June 2013, the Aid Management Platform was launched by the Ministry of Finance to assist efforts aimed at monitoring aid and budget spending. All NGOs are now required to report details about their funding and programmes to the platform, building on civil society- driven open data initiatives including Open Nepal’s open data portal, Aid Snapshot, and the Open Aid Partnership. View the report Supporting sustainable development with open data from The Open Data Institute. Information and Communications for Development.

The United Nations (UN) has developed a set of action-oriented goals to achieve global sustainable development by 2030. 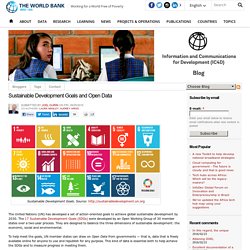 The 17 Sustainable Development Goals (SDGs) were developed by an Open Working Group of 30 member states over a two-year process. They are designed to balance the three dimensions of sustainable development: the economic, social and environmental. To help meet the goals, UN member states can draw on Open Data from governments — that is, data that is freely available online for anyone to use and republish for any purpose. This kind of data is essential both to help achieve the SDGs and to measure progress in meeting them. Achieving the SDGs Open Data can help achieve the SDGs by providing critical information on natural resources, government operations, public services, and population demographics. Open Development. Od4d.net. Designing for new cellphone users in Burma - Home.

Designing for new cellphone users in Burma - Home. GSMA Connected Women. GSMA Connected Women works with mobile network operators and their partners to take action to reduce the gender gap in connectivity and improve access to mobile money services by overcoming barriers to women’s ownership and use of mobile phones. 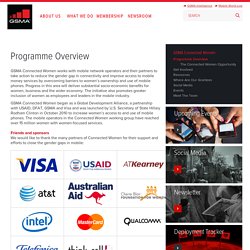 Progress in this area will deliver substantial socio-economic benefits for women, business and the wider economy. The initiative also promotes greater inclusion of women as employees and leaders in the mobile industry. GSMA Connected Women began as a Global Development Alliance, a partnership with USAID, DFAT, GSMA and Visa and was launched by U.S. Secretary of State Hillary Rodham Clinton in October 2010 to increase women’s access to and use of mobile phones. The mobile operators in the Connected Women working group have reached over 15 million women with women-focused services. Friends and sponsors We would like to thank the many partners of Connected Women for their support and efforts to close the gender gaps in mobile: