Members of Diplomatic Missions & Government Officials (A, G) With the exception of a Head of State or Government who qualifies for an A1 visa regardless of the purpose of his or her visit to the United States, the type of visa required by a diplomat or other government official depends upon his or her reason for entering the United States. 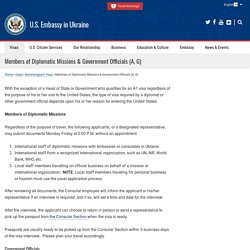 NOTE: Local staff members traveling for personal business or tourism must use the usual application process. Passports are usually ready to be picked up from the Consular Section within 5 business days of the visa interview. Announcing the CVE Grants Program. Today, Secretary Johnson announced the new Countering Violent Extremism (CVE) Grant Program to support community-led initiatives across the country to build resilience to the threat of violent extremism. 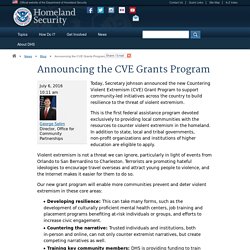 This is the first federal assistance program devoted exclusively to providing local communities with the resources to counter violent extremism in the homeland. In addition to state, local and tribal governments, non-profit organizations and institutions of higher education are eligible to apply. Violent extremism is not a threat we can ignore, particularly in light of events from Orlando to San Bernardino to Charleston. Terrorists are promoting hateful ideologies to encourage travel overseas and attract young people to violence, and the Internet makes it easier for them to do so. 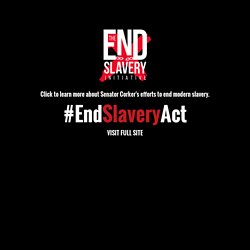 Follow the conversation online using the hashtags #EndSlaveryAct and #EndItMovement. “Today more than 27 million people, many of them women and children, suffer under forced labor and sexual servitude in over 165 countries around the world, including our own,” said Corker. “As I have seen firsthand, the stark reality of modern slavery is unconscionable, demanding the United States and civilized world make a commitment to end it for good. Despite the pervasive nature of this horrific practice, modern slavery is a crime of opportunity that thrives where enforcement is weak, so raising the risk of prosecution can achieve significant results. Background: Over 27 million people are trapped in the multi-billion dollar modern slave trade industry. Office of Refugee Resettlement. The Office of Refugee Resettlement (ORR) provides people in need with critical resources to assist them in becoming integrated members of American society. 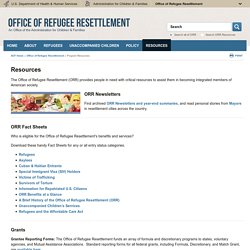 Find a Volunteer Opportunity Near You. Sign up for updates from United Way: Texto original Sugiere una traducción mejor Find Your United Way Donate Searching… From Our Volunteers I thought to myself, I've been giving for years, but there's so much more to be done. 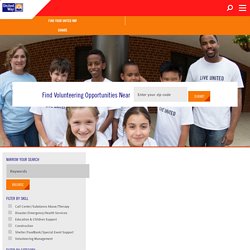 Unicefusa. 7.5 million children are affected by the brutal four-year-old conflict in Syria. 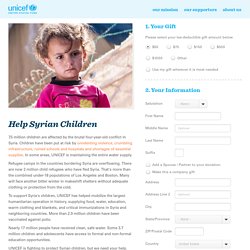 Children have been put at risk by unrelenting violence, crumbling infrastructure, ruined schools and hospitals and shortages of essential supplies. In some areas, UNICEF is maintaining the entire water supply. Refugee camps in the countries bordering Syria are overflowing. There are now 2 million child refugees who have fled Syria. That's more than the combined under-18 populations of Los Angeles and Boston.