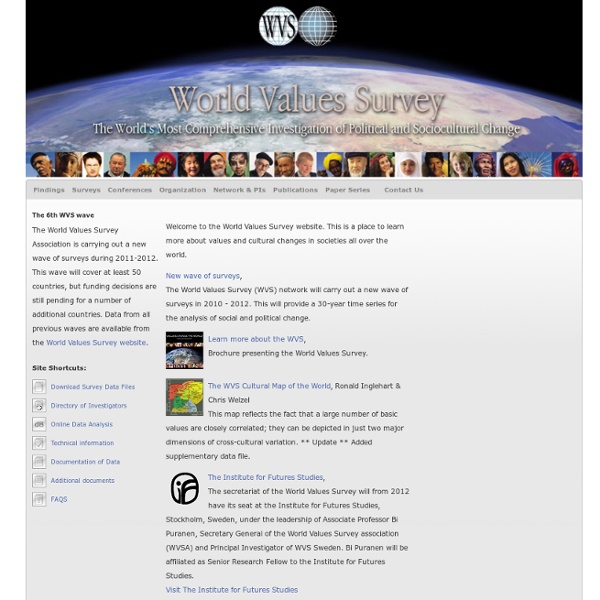 The 6th WVS wave The World Values Survey Association is carrying out a new wave of surveys during 2011-2012. This wave will cover at least 50 countries, but funding decisions are still pending for a number of additional countries. Data from all previous waves are available from the World Values Survey website . Site Shortcuts: Download Survey Data Files

Ranking of economies Economy Rankings Economies are ranked on their ease of doing business, from 1–190. A high ease of doing business ranking means the regulatory environment is more conducive to the starting and operation of a local firm. The rankings are determined by sorting the aggregate distance to frontier scores on 10 topics, each consisting of several indicators, giving equal weight to each topic. The rankings for all economies are benchmarked to June 2016.

CIA - The World Factbook The Office of Public Affairs (OPA) is the single point of contact for all inquiries about the Central Intelligence Agency (CIA). We read every letter, fax, or e-mail we receive, and we will convey your comments to CIA officials outside OPA as appropriate. However, with limited staff and resources, we simply cannot respond to all who write to us. Contact Information Submit questions or comments online By postal mail: Central Intelligence Agency Office of Public Affairs Washington, D.C. 20505

Eurostat Home Your feedback on the quality of Eurostat's data How can we be sure that we are meeting your needs? We think the best way is to ask you directly and so would be grateful if you could spare just a couple of minutes to answer our questionnaire. > more Updated: Digital publication on Energy Statistics can help to make the complex process of energy more understandable. ViewsWire Tunisia's and Egypt's authoritarian leaders have been toppled. The question now is whether popular protests and uprisings will sweep through the Middle East and North Africa (MENA) and possibly spread to authoritarian regimes in other regions. It is safe to say that vulnerabilities exist in many countries, but assessing whether popular discontent will translate into a serious challenge to a regime is problematic.

Clarke's three laws Clarke's Three Laws are three "laws" of prediction formulated by the British science fiction writer Arthur C. Clarke. They are: When a distinguished but elderly scientist states that something is possible, he is almost certainly right. When he states that something is impossible, he is very probably wrong.The only way of discovering the limits of the possible is to venture a little way past them into the impossible.Any sufficiently advanced technology is indistinguishable from magic. Origins[edit]

The International Flag of Planet Earth The scientific study of flags is called vexillology, and the practice of designing flags is called vexillography. Both of these are an outcome of heraldry. In these practices there are different unofficial design rules/costums, about colors, placement, proportions, typography, and aestethics in general.