United Nations to fly first ever space mission aboard the Dream Chaser space plane. An artist's depiction of the Sierra Nevada Corp's Dream Chaser in space. 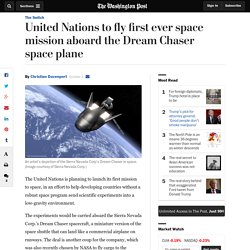 (Image courtesy of Sierra Nevada Corp.) The United Nations is planning to launch its first mission to space, in an effort to help developing countries without a robust space program send scientific experiments into a low-gravity environment. The experiments would be carried aboard the Sierra Nevada Corp.’s Dream Chaser spacecraft, a miniature version of the space shuttle that can land like a commercial airplane on runways. The deal is another coup for the company, which was also recently chosen by NASA to fly cargo to the International Space Station. The unmanned mission would launch in 2021, officials said, after the experiments had been chosen. The Mars Society. Global Cooperation. Development Cooperation Handbook. The scope of this handbook Managing, Evaluating and Communicating in Development Programs Sharing knowledge and tools for cooperation and dialogue How you can participate and make a difference. 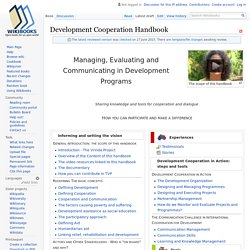 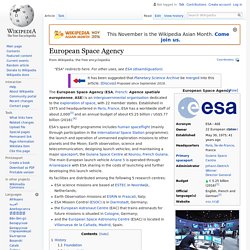 Established in 1975 and headquartered in Paris, France, ESA has a worldwide staff of about 2,000[3] and an annual budget of about €5.25 billion / US$5.77 billion (2016).[4] ESA's space flight programme includes human spaceflight (mainly through participation in the International Space Station programme); the launch and operation of unmanned exploration missions to other planets and the Moon; Earth observation, science and telecommunication; designing launch vehicles; and maintaining a major spaceport, the Guiana Space Centre at Kourou, French Guiana.

The main European launch vehicle Ariane 5 is operated through Arianespace with ESA sharing in the costs of launching and further developing this launch vehicle. Its facilities are distributed among the following 5 research centres: Japan Aerospace Exploration Agency. ISRO - Government of India. List of government space agencies - Wikipedia. This is a list of government agencies engaged in activities related to outer space and space exploration. 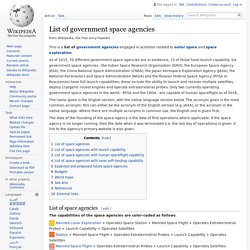 As of 2015, 70 different government space agencies are in existence; 13 of those have launch capability. US State Department - Policy - Directorate of Defense Trade Controls. The Department of State is responsible for the export and temporary import of defense articles and services governed by 22 U.S.C. 2778 of the Arms Export Control Act ("AECA"; see the AECA Web page) and Executive Order 13637. 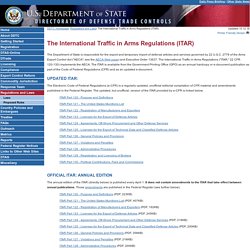 The International Traffic in Arms Regulations ("ITAR," 22 CFR 120-130) implements the AECA. The ITAR is available from the Government Printing Office (GPO) as an annual hardcopy or e-document publication as part of the Code of Federal Regulations (CFR) and as an updated e-document. The Electronic Code of Federal Regulations (e-CFR) is a regularly updated, unofficial editorial compilation of CFR material and amendments published in the Federal Register. The updated, but unofficial, version of the ITAR provided by e-CFR is linked below. Official ITAR: ANNUAL EDITION. The Little Red Hen - Wikipedia. 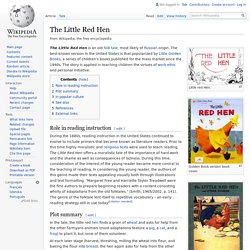 The Little Red Hen is an old folk tale, most likely of Russian origin. The best-known version in the United States is that popularized by Little Golden Books, a series of children's books published for the mass market since the 1940s. The story is applied in teaching children the virtues of work ethic and personal initiative. Role in reading instruction[edit] During the 1880s, reading instruction in the United States continued to evolve to include primers that became known as literature readers.

Plot summary[edit] In the tale, the little red hen finds a grain of wheat and asks for help from the other farmyard animals (most adaptations feature a pig, a cat, and a frog) to plant it, but none of them volunteer. At each later stage (harvest, threshing, milling the wheat into flour, and baking the flour into bread), the hen again asks for help from the other animals, but again she gets no assistance. In popular culture[edit]