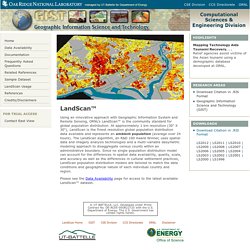 At approximately 1 km resolution (30" X 30"), LandScan is the finest resolution global population distribution data available and represents an ambient population (average over 24 hours). The LandScan algorithm, an R&D 100 Award Winner, uses spatial data and imagery analysis technologies and a multi-variable dasymetric modeling approach to disaggregate census counts within an administrative boundary. Since no single population distribution model can account for the differences in spatial data availability, quality, scale, and accuracy as well as the differences in cultural settlement practices, LandScan population distribution models are tailored to match the data conditions and geographical nature of each individual country and region. Please see the Data Availability page for access to the latest available LandScan™ dataset. Data. Data. The DHS Program - Quality information to plan, monitor and improve population, health, and nutrition programs.

GPOPDB Home Page. The database divides the earth into Big Cells, rectangular grids of 20 minutes of latitude by 30 minutes of longitude, an area of around 2,000 square kilometers at the equator. 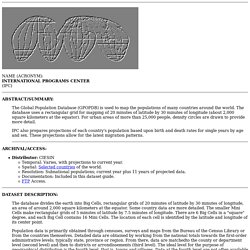 Some country data are more detailed. The smaller Mini Cells make rectangular grids of 5 minutes of latitude by 7.5 minutes of longitude. There are 6 Big Cells in a "square" degree, and each Big Cell contains 16 Mini Cells. The location of each cell is identified by the latitude and longitude of its center point.

Population data is primarily obtained through censuses, surveys and maps from the Bureau of the Census Library or from the countries themselves. Rural Population The rural population is distributed to a set of rectangles called Big Cells. Urban Population Populations of urban agglomerations of 25,000 people or more are are distributed to a set of circles. Map & Geospatial Information Round Table (MAGIRT) Compiled by Peter Linberger The University of Akron July 2, 2001 Warning: some links no long available U.S. 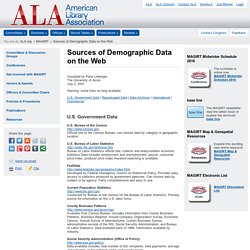 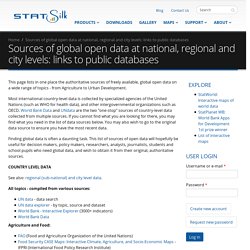 Most international country-level data is collected by specialized agencies of the United Nations (such as WHO for health data), and other intergovernmental organizations such as OECD. World Bank Data and UNdata are the two "one-stop" sources of country-level data collected from multiple sources. If you cannot find what you are looking for there, you may find what you need in the list of data sources below. You may also wish to go to the original data source to ensure you have the most recent data. Finding global data is often a daunting task. See also: regional (sub-national) and city level data. All topics - compiled from various sources: Agriculture and Food: Demography & Population WHO (World Health Organization) Global Change Master Directory (GCMD) Abstract: The Global Demographic Data collection holds global gridded data products describing demographic information and water demand in relation to population data. 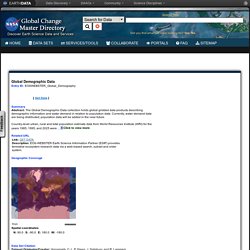 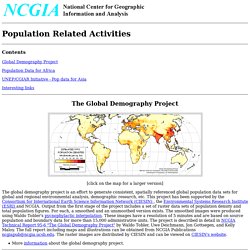 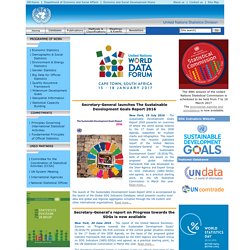 Wasmalia Bivar of Brazil, addressed the Economic and Social Council (ECOSOC) on 1 June during its Coordination and Management Meeting. Ms. Bivar, who provided her briefing by videolink, informed the Council that the Statistical Commission at its last session in March had agreed “as a practical starting point” on a global indicator framework, which had been developed by the Inter-agency and Expert Group on Sustainable Development Goal Indicators (IAEG-SDGs). 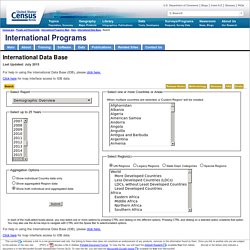 What is the International Data Base? The International Data Base (IDB) offers a variety of demographic indicators for countries and areas of the world with a population of 5,000 or more. World and Region demographic indicators in the IDB, including population totals, exclude the populations of countries and areas with fewer than 5,000 people. The IDB has provided access to demographic data for over 25 years to governments, academics, other organizations, and the public. 2. Social Development. Social Explorer. Consumer Styles - MBI english. MB-Research Global Consumer Styles for market segmentation and determination of target groups MB-Research Global Consumer Styles is an innovative model for market segmentation and determination of target groups. 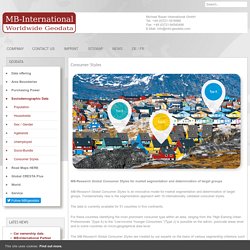 Fundamentally new is the segmentation approach with 10 internationally validated consumer styles. The data is currently available for 51 countries in five continents. For these countries identifying the most prominent consumer type within an area, ranging from the “High Earning Urban Professionals “(type A) to the “Low-Income Younger Consumers “(Type J) is possible on the admin, postcode areas level and to some countries on micro-geographical area level. The MB-Research Global Consumer Styles are created by our experts on the basis of various segmenting criterions such as sociodemographics, value orientations, mindset and motivations, consumer behavior and consumer scope which has been internationally validated.