A museum that seeks to understand American history through the lens of the African American experience. Diversity, Equity And Justice. Lessons of the Populist Movement of the 1890s. The Black Past: Remembered and Reclaimed. Exploring Constitutional Law. Educational Resources. Main content Get informed. 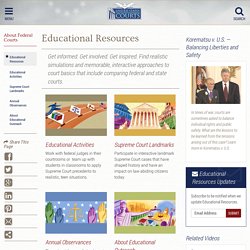 Get involved. Get inspired. Find realistic simulations and memorable, interactive approaches to court basics that include comparing federal and state courts. Educational Activities Work with federal judges in their courtrooms or team up with students in classrooms to apply Supreme Court precedents to realistic, teen situations. Supreme Court Landmarks Participate in interactive landmark Supreme Court cases that have shaped history and have an impact on law-abiding citizens today. Annual Observances Throughout the year, federal courts open their doors to provide experiential learning, mark legal milestones, and celebrate heritage months with ready-to-use activities and multi-media resources. About Educational Outreach Trust resources and activities that meet best practices and academic standards.

A Brief History of Jim Crow. “I can ride in first-class cars on the railroads and in the streets,” wrote journalist T. 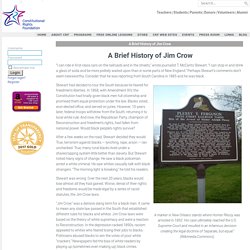 McCants Stewart. “I can stop in and drink a glass of soda and be more politely waited upon than in some parts of New England.” Perhaps Stewart’s comments don’t seem newsworthy. Consider that he was reporting from South Carolina in 1885 and he was black. Stewart had decided to tour the South because he feared for freedmen’s liberties. After a few weeks on the road, Stewart decided they would. Stewart was wrong. “Jim Crow” was a derisive slang term for a black man. In 1890, in spite of its 16 black members, the Louisiana General Assembly passed a law to prevent black and white people from riding together on railroads. 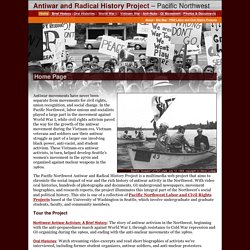 In the Pacific Northwest, labor unions and socialists played a large part in the movement against World War I, while civil rights activism paved the way for the growth of the antiwar movement during the Vietnam era. Vietnam veterans and soldiers saw their antiwar struggle as part of a larger one involving black power, anti-racist, and student activism. These Vietnam-era antiwar activists, in turn, helped develop Seattle's women's movement in the 1970s and organized against nuclear weapons in the 1980s. Seattle Civil Rights & Labor History Project. 4 Ideas That Could Begin to Reform the Criminal Justice System and Improve Police-Community Relations. SOURCE: AP/Elise Amendola A demonstrator holds his hands up on campus at Boston University during a protest to show solidarity with protesters in Ferguson, Missouri. 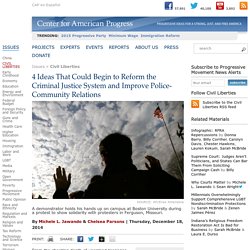 By Michele L. Chicago Public Fools. Civil rights groups blast parents opting their kids out of high-stakes tests. Why they are wrong. Is high-stakes standardized testing helping students who live in poverty and students of color — or hurting them? 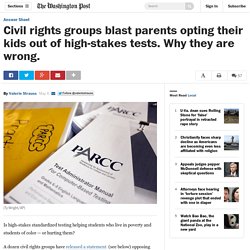 A dozen civil rights groups have released a statement (see below) opposing efforts by parents and others to boycott high-stakes standardized tests aligned to the Common Core and similar standards, saying that the tests are valuable to students of color and those from low-income families. The statement says in part: The Network for Public Education, an advocacy group started by historian Diane Ravitch and others, released a response saying that it is the high-stakes tests themselves that are doing the harm, not parents who are opting their children out of taking these exams. The Leadership Conference on Civil and Human Rights. Who We Are. About Us FairVote makes democracy fair, functional, and representative by developing the analysis and educational tools necessary for our reform partners to win and sustain improvements to American elections. 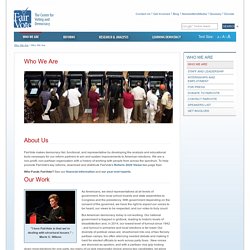 We are a non-profit, non-partisan organization with a history of working with people from across the spectrum. EEOC Home Page. American Civil Liberties Union. Disability Rights Legal Center. Paralyzed Veterans of America. Top 10 Examples of NAACP Racism. The National Association for the Advancement of Colored People (NAACP) condemned the Tea Party movement last month for alleged bigotry within its ranks. 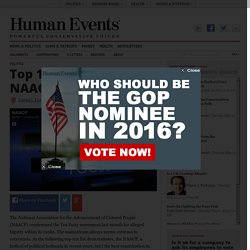 The mainstream always seems extreme to extremists. As the following top-ten list demonstrates, the NAACP, a hotbed of political hotheads in recent years, isn’t the best organization to be lecturing others about extremism. 10. In March 2008, ABC News revealed that Barack Obama’s pastor had preached that African Americans should sing “not God Bless America, God Damn America,” that 9/11 proved that “America’s chickens are coming home to roost,” and that the U.S. government invented AIDS.