Brazil passes groundbreaking Internet governance Bill. I Love You, America, But This List Should NOT Make You Uncomfortable. The New Zealand sex-work model. ‘Sex workers are as much entitled to protection from sexual harassment as those working in other occupations.” 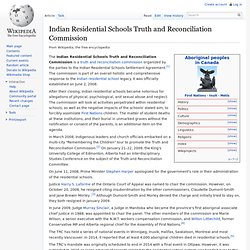 It was officially established on June 2, 2008. After their closing, Indian residential schools became notorious for allegations of physical, psychological, and sexual abuse and neglect. Amnesty International Slams Quebec Values Charter For Limiting 'Fundamental Rights' MONTREAL - Amnesty International is wading into the debate over Quebec's controversial charter of values, arguing that the plan would limit "fundamental rights" and further stigmatize vulnerable women. 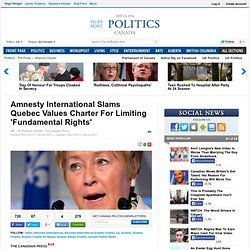 The Canadian branch of the human-rights organization says the Parti Quebecois proposal would violate Canadian and international law for infringing on freedom of expression and religion. Conservative Victims’ Bill of Rights smacks of medieval justice. Many of us had hoped the recent Speech from the Throne would herald a new direction in justice and corrections. 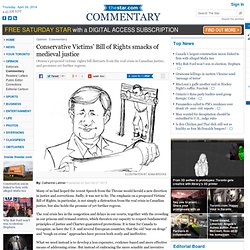 Sadly, it was not to be. The emphasis on a proposed Victims’ Bill of Rights, in particular, is not simply a distraction from the real crisis in Canadian justice, but also holds the promise of yet further regress. The real crisis lies in the congestion and delays in our courts, together with the crowding in our prisons and remand centres, which threaten our capacity to respect fundamental principles of justice and Charter-guaranteed protections. 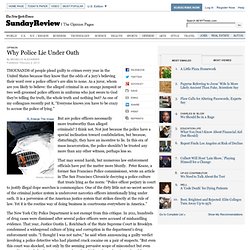 I think not. Not just because the police have a special inclination toward confabulation, but because, disturbingly, they have an incentive to lie. In this era of mass incarceration, the police shouldn’t be trusted any more than any other witness, perhaps less so. That may sound harsh, but numerous law enforcement officials have put the matter more bluntly. Peter Keane, a former San Francisco Police commissioner, wrote an article in The San Francisco Chronicle decrying a police culture that treats lying as the norm: “Police officer perjury in court to justify illegal dope searches is commonplace. The New York City Police Department is not exempt from this critique. Remarkably, New York City officers have been found to engage in patterns of deceit in cases involving charges as minor as trespass. Mr. Jury Finds Occupy Wall Street Protester Innocent After Video Contradicts Police Testimony [Updated: VIDEO]

In the first jury trial stemming from an Occupy Wall Street protest, Michael Premo was found innocent of all charges yesterday after his lawyers presented video evidence directly contradicting the version of events offered by police and prosecutors. 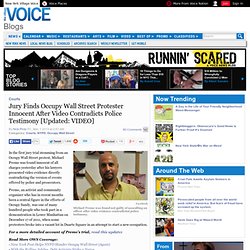 Watch The Cops. Matt Gurney: Lapel cameras for Toronto cops is good news for everyone. Toronto’s police force announced Tuesday that it will join several other large city forces across Canada and the United States in adopting lapel cameras — video cameras worn as part of the uniform that keep a video record of everything that an officer does while on duty. 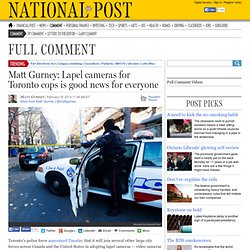 This is in response to several recent reports regarding incidents in which police officers have used force against members of the public. While many details remain to be settled, the police have said that they hope to start the project before the year is out. The union that represents the police officers doesn’t sound wildly enthusiastic about the plan. The British Police: getting away with murder since 1969. Total corruption: Organised crime infiltrated and compromised UK courts, police, HMRC, Crown Prosecution Service, prisons, and juries. The chickens come home to roost. Christopher Dorner LAPD (Photo credit: www.YoVenice.com) This article also appeared on Counterpunch, and was profiled on the front page of Reddit. My first experience of the LAPD was as a child back in Wales, staring at the TV screen in horror and fascination, watching a grainy image of police officers beat a black man to a pulp. I’d never seen anything like it.

None of us had. Six thousand miles away, in a tiny village in Wales with only five hundred inhabitants, we talked about Rodney King and racism in Los Angeles. And then I moved to Los Angeles in my twenties, and I became exposed to a different kind of policing. The department has not changed since the Rampart and Rodney King days. Nova Scotia’s awful cyber abuse law makes bullies of us all - Blog Central, Jesse Brown. Jeff Chiu/AP I’ve written before about the problems involved in legislating against cyberbullying. 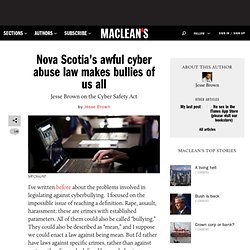 I focused on the impossible issue of reaching a definition. Rape, assault, harassment: these are crimes with established parameters.