Why Privacy Matters Even if You Have 'Nothing to Hide' - The Chronicle Review. By Daniel J. 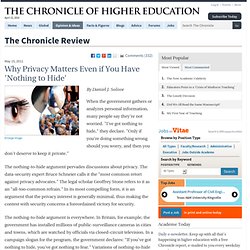 Solove When the government gathers or analyzes personal information, many people say they're not worried. "I've got nothing to hide," they declare. "Only if you're doing something wrong should you worry, and then you don't deserve to keep it private. " The nothing-to-hide argument pervades discussions about privacy. The nothing-to-hide argument is everywhere. The argument is not of recent vintage. What am I missing in the Snowden affair? - Opinion. I would have thought that there was a clear set of principles that make the American diplomatic pursuit of Edward Snowden as a fugitive from justice a rather empty and futile gesture. 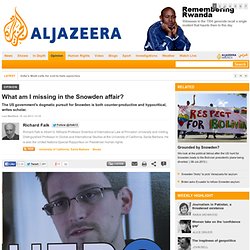 As far as I can tell, there is not even a need for asylum as governments should have been prepared to grant Snowden residence status because his alleged criminal acts in the United States were without question political crimes , without violence or monetary motivation. I had thought it was as clear as law can be that any person who has committed a political crime should be exempted from mandatory extradition even if a treaty existed imposed a duty on its parties to hand over individuals accused of serious criminal activity. To be sure, from the perspective of the United States government, Snowden's exposure of the PRISM surveillance program was a flagrant violation of the Espionage Act. But it was also as clearly a political crime as almost any undertaking can be. Inherent hypocrisy. End the Snowden circus now - Opinion.

I find the discourse surrounding the Snowden Affair bewildering. 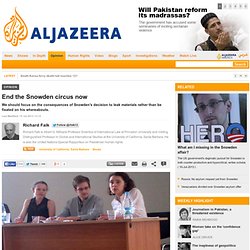 The latest reports suggest that the United States is using maximum political leverage, including coercive diplomacy, to discourage small Latin American countries from granting asylum to Edward Snowden. It is also complaining that Russia is giving Snowden ‘a propaganda platform’ and expressing its ‘disappointment’ with China/Hong Kong for its earlier refusal to expel Snowden back to the United States to face charges once his passport was cancelled. This anger is surely misdirected.

Taking the overall situation into account, whatever anger is generated, should rather be directed at the United States for employing such arrogant language and crude methods in its hopefully vain effort to gain custody over Snowden. From almost every angle of relevant law, morality, and politics the case for protecting Snowden against the long arm of American criminal law is overwhelming. Media misdirection Bait and switch.

America’s Shameful Human Rights Record. The 18th Session of the Human Rights Council. The food crisis, the threat of a second global recession, the protest movements in the Middle East, North Africa and elsewhere, the Human Rights Council’s investigations of allegations of gross human rights violations in Libya, Syria and Côte d’Ivoire and a renewed call for States to respect human rights in counter terrorism strategies are highlighted in High Commissioner Pillay’s opening address to the 18th session of the Human Rights Council. The lives of as many as 750,000 people are at risk because of the food crisis in the Horn of Africa, according to Pillay, who told the Council that the emergency is the result of not just environmental factors but also “the failure of governments – individually and collectively – to meet their preventive and remedial human rights obligations”. 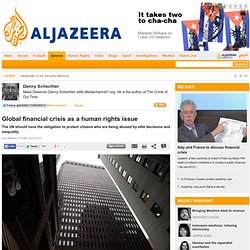 Then, it was about the cultural boycott of apartheid South Africa. A few years later, South Africans would win their freedom. Now, I am back in the maze of conference rooms, hoping to be covered. My topic these days is the financial crisis as a human rights issue and I was invited by an international NGO to bring it to the sessions alongside the Human Rights Council composed of 47 member states.

As a journalist, I am uncomfortable being an advocate in such a ritualistic politicised process that every year witnesses scores of oppressed peoples seeking relief or visibility for causes that seldom get any attention outside of the UN basement. That's where these issues often end up being heard before being filed away in archives that few media outlets ever consult. Social movements As a long-time human rights advocate, I have a slightly different approach. 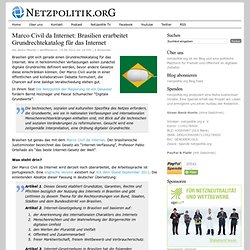