The feds have resumed a controversial program that lets cops take stuff and keep it. Under U.S. 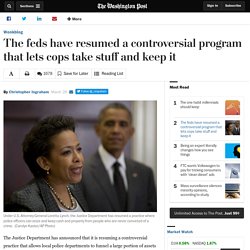 Attorney General Loretta Lynch, the Justice Department has resumed a practice where police officers can seize and keep cash and property from people who are never convicted of a crime. (Carolyn Kaster/AP Photo) The Justice Department has announced that it is resuming a controversial practice that allows local police departments to funnel a large portion of assets seized from citizens into their own coffers under federal law. The "Equitable Sharing Program" gives police the option of prosecuting some asset forfeiture cases under federal instead of state law, particularly in instances where local law enforcement officers have a relationship with federal authorities as part of a joint task force.

Federal forfeiture policies are more permissive than many state policies, allowing police to keep up to 80 percent of assets they seize. The Justice Department had suspended payments under this program in December, due to budget cuts included in last year's spending bill. Taken: How Law Enforcement Grabs Private Property. Untitled. West Midlands Police/FlickrIn the wake of Tuesday's federal raid on male-escort advertising site Rentboy.com, many on social media have suggested anti-gay motivations, "a throwback to when the police raided gay bars in the 50s and 60s. 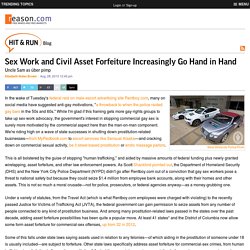 " While I'm glad if this framing gets more gay-rights groups to take up sex-work advocacy, the government's interest in stopping commercial gay sex is surely more motivated by the commercial aspect here than the man-on-man component. Civil Asset Forfeiture: Guilty Until Proven Innocent. Laura Krasovitzky, Drug Policy AllianceWaking Times Imagine going back home one day to find an empty house and all your belongings gone; or even worse, imagine being in your house and having your door suddenly smashed open by law enforcement officers in masks and being told at gunpoint that your personal possessions are being taken away. 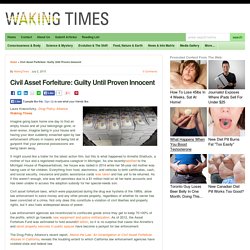 It might sound like a trailer for the latest action film, but this is what happened to Annette Shattuck, a mother of four and a registered marijuana caregiver in Michigan. As she recentlytestified to the Michigan House of Representatives, her house was raided in 2014 while her 56-year old mother was taking care of her children. Everything from food, electronics, and vehicles to birth certificates, cash, and social security, insurance and public assistance cards was taken and has yet to be returned. Yoink! TSA Publicizes Man Traveling with Bag of Cash. Then Feds Seize It. TSAHappy Independence Day weekend, America! 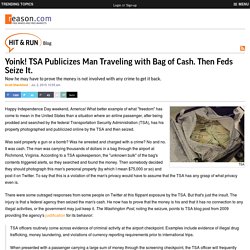 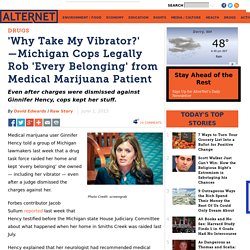 Forbes contributor Jacob Sullum reported last week that Hency testified before the Michigan state House Judiciary Committee about what happened when her home in Smiths Creek was raided last July. Hency explained that her neurologist had recommended medical marijuana to treat pain associated with multiple sclerosis. She is also registered in the state of Michigan as a caregiver for five other patients, giving her the ability to distribute medical marijuana. Hency said that the six ounces in her locked backpack were in compliance with Michigan medical marijuana laws when a drug task force raided her home with four children present. How the DEA took a young man’s life savings without ever charging him with a crime. The DEA Asset Forfeiture Program's unofficial logo: "You make it, we'll take it. 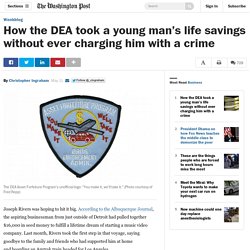 " (Photo courtesy of Fred Repp) Joseph Rivers was hoping to hit it big. According to the Albuquerque Journal, the aspiring businessman from just outside of Detroit had pulled together $16,000 in seed money to fulfill a lifetime dream of starting a music video company. Last month, Rivers took the first step in that voyage, saying goodbye to the family and friends who had supported him at home and boarding an Amtrak train headed for Los Angeles. Cash Cops: How Civil Forfeiture Enriched U.S. Law Enforcement. Civil forfeiture is a major issue that's recently gotten into the news, notably due to Attorney General Eric Holder's change to the controversial police action of seizing people's property. 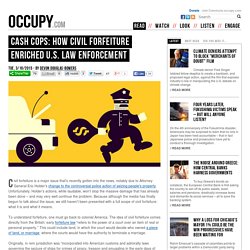 Unfortunately, Holder’s actions, while laudable, won't stop the massive damage that has already been done – and may very well continue the problem. Because although the media has finally begun to talk about the issue, we still haven’t been presented with a full scope of civil forfeiture: what it is and what it means. To understand forfeiture, one must go back to colonial America. The idea of civil forfeiture comes directly from the British; early forfeiture law “refers to the power of a court over an item of real or personal property.” US Court Rules That Kim Dotcom Is A 'Fugitive' And Thus DOJ Can Take His Money.

In the long, convoluted and complex legal battles facing Megaupload founder Kim Dotcom, there was some bizarre stuff that happened late last year. 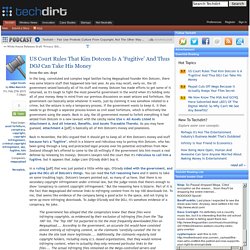 As you may recall, early on, the US government seized basically all of his stuff and money. Dotcom has made efforts to get some of it returned, as it's tough to fight the most powerful government in the world when it's holding onto all of your money. Keep in mind from our previous discussions on asset seizure and forfeiture, the government can basically seize whatever it wants, just by claiming it was somehow related to a crime, but the seizure is only a temporary process.

If the government wants to keep it, it then needs to go through a separate process known as civil asset forfeiture, which is effectively the government suing the assets. Search and Seizure Law. The Fourth Amendment to the U.S. 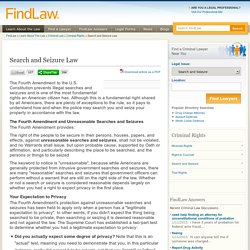 Constitution prevents illegal searches and seizures and is one of the most fundamental rights an American citizen has. Although this is a fundamental right shared by all Americans, there are plenty of exceptions to the rule, so it pays to understand how and when the police may search you and seize your property in accordance with the law. The Fourth Amendment and Unreasonable Searches and Seizures The Fourth Amendment provides: Aggressive police take hundreds of millions of dollars from motorists not charged with crimes. Know your rights: During traffic stops on the nation’s highways, the U.S. 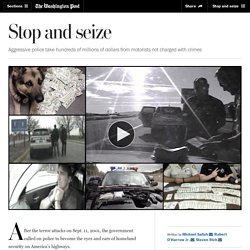 Constitution’s Fourth Amendment protects motorists “against unreasonable searches and seizures.” The law also gives police the power to investigate and act on their suspicions. 1.