Gay O.K. T-Shirts Are Not O.K. At A Texas Middle School. Two students from Faubion Middle School in McKinney, Texas, were sent home, and a dozen others were made to cover up the homemade "Gay O.K. 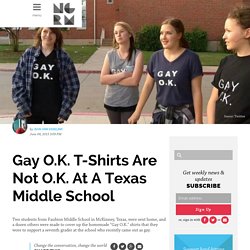 " shirts that they wore to support a seventh grader at the school who recently came out as gay. Change the conversation, change the world Share this Administrators at Faubion Middle School in McKinney, Texas, were greeted by a small riot in the school cafeteria when they decided to eject two boys for wearing handmade "Gay O.K. " t-shirts and force another dozen or so students to cover up their shirts. "We were doing perfectly fine until lunch," Sammy Heiman, the seventh grader who designed the shirts told NBCDFW News. "And then (school officials) called us all out, all the people wearing them, called us out of the cafeteria. And people started getting rowdy because they knew what was going on. The kids wore the shirts to show support for a seventh grader who recently came out. Perhaps it never occurred to them. The Pansy Project - About. The video above was made at 'Truth is Concrete' 24/7 Marathon Camp in Graz, Austria 2012 and includes Paul Harfleet outlining the project and discussion with 'Guerrilla Gardener' Richard Reynolds. 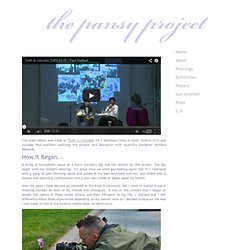 How it Began... A string of homophobic abuse on a warm summer's day was the catalyst for this project. The day began with two builders shouting; "it's about time we went gay-bashing again isn't it? "; continued with a gang of yobs throwing abuse and stones at my then boyfriend and me, and ended with a bizarre and unsettling confrontation with a man who called us 'ladies' under his breath.

Over the years I have become accustomed to this kind of behaviour, but I came to realise it was a shocking concept to most of my friends and colleagues. What interested me was the way that the locations later acted as a prompt for me to explore the memories associated with that place. The species of plant was of course vitally important and the pansy instantly seemed perfect. OutFront Minnesota Community Services - Give Out Day. We engage leaders and volunteers statewide to create a Minnesota where LGBT people are free to be who they are and love who they love. 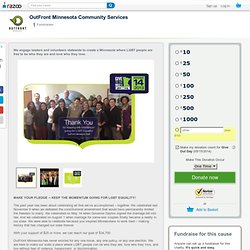 The past year has been about celebrating all that we’ve accomplished – together. We celebrated last November 6 when we defeated the constitutional amendment that would have permanently limited the freedom to marry. We celebrated on May 14 when Governor Dayton signed the marriage bill into law. And we celebrated on August 1 when marriage for same-sex couples finally became a reality in our state. We were able to celebrate because you inspired Minnesotans to work hard – making history that has changed our state forever. With your support of $25 or more, we can reach our goal of $34,700. OutFront Minnesota has never existed for any one issue, any one policy, or any one election.

Together, we have done incredible work and accomplished great things. We know there is still more to do. Minneapolis / St.Paul / Greater MN. Minnesota Legislature - Geographic Information Services. Marriage Bill.

Pansexuality. The concept of pansexuality rejects the gender binary, the "notion of two genders and indeed of specific sexual orientations",[3] as pansexual people are open to relationships with people who do not identify as strictly men or women.[3][6] Etymology[edit] The prefix pan- comes from an Ancient Greek term meaning "all" or "every".

Omni- comes from a Latin term meaning "all". Pansexual is derived from the word pansexualism, dated back to 1917, which is the view "that the sex instinct plays the primary part in all human activity, mental and physical".[7][8] Credited to Sigmund Freud, it is a term of reproach leveled at early psychology,[7][8] and is also defined as "the pervasion of all conduct and experience with sexual emotions".[9] The conceptualization of pansexuality as distinct from pansexualism contrasts with predominant prefixes attached to the -sexual and -gender roots. Compared with bisexuality and other sexual identities[edit] The pansexual pride flag. Volunteer - 20MillionMore. LegalizeLoveBug.com "1 Million Likes For Obama" The I-35W Bridge Light Shows. A Look At The I-35W Saint Anthony Falls BridgeLight Show Events During 2011 And 2012 The new I-35W Saint Anthony Falls Bridge features an innovative LED lighting system where each LED element is individually addressable, allowing any color in the spectrum to be displayed. 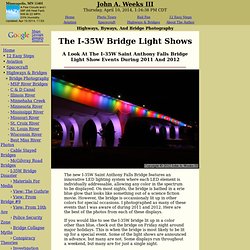 On most nights, the bridge is bathed in a erie blue glow that looks like something out of a science fiction movie. However, the bridge is occassionaly lit up in other colors for special occasions. I photographed as many of these events that I was aware of during 2011 and 2012. Here are the best of the photos from each of these displays. If you would like to see the I-35W bridge lit up in a color other than blue, check out the bridge on Friday night around major holidays. The photo above is the Saint Anthony Falls Bridge lit up in a rainbow pattern to celebrate the 2012 Twin Cities Pride Festival on June 22, 2012. Note—these materials are covered by copyright and may not be used without written permission. A Note to My Kid.

Standing on the Side of Love Online Store. Welcome to FCKH8 - Born This Way. Human Rights Campaign. Leading Minnesota Toward LGBT Equality.