A museum that seeks to understand American history through the lens of the African American experience. 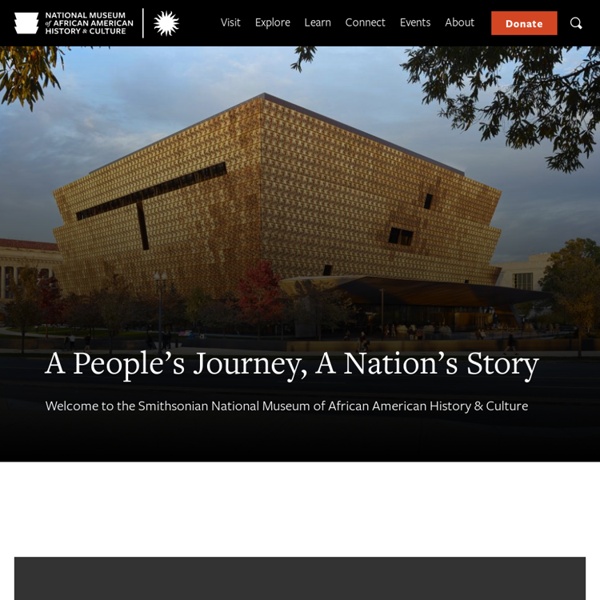 Department History Since its creation in 1789, the Department of State has carried out a series of reorganizations and has created new offices and bureaus to deal with new diplomatic challenges. This portion of our website contains an Administrative Timeline of the Department of State, biographies of the Secretaries of State, a database of Principal Officers and Chiefs of Mission, and a history of the buildings of the Department of State. The Department of State has grown significantly over the years. The first Secretary of State, Thomas Jefferson, oversaw a small staff of one chief clerk, three other clerks, a translator, and a messenger and only maintained two diplomatic posts, in London and Paris, as well as 10 consular posts. World War I (1914–1918) and World War II (1939–1945) brought vastly increased global responsibilities to the United States as it emerged as a preeminent power.

Everything Wakanda Learning Lab is this? This Learning Lab explores the importance of representation in popular media. How are people portrayed? Why are they portrayed? What does this say about a people in a society and the society itself? How do these messages affect and inform us about others and ourselves? Black History Facts - Black History Month & Little Known Facts - HISTORY Black History Month honors the contributions of African Americans to U.S. history. Among prominent figures are Madam C.J. Walker, who was the first U.S. woman to become a self-made millionaire; George Washington Carver, who derived nearly 300 products from the peanut; Rosa Parks, who sparked the Montgomery Bus Boycott and galvanized the civil rights movement; and Shirley Chisholm, who was the first African American woman elected to the U.S. House of Representatives. Read on for more Black history facts.

Andrew Jackson: Campaigns and Elections The Campaign and Election of 1824: The Virginia presidential dynasty was coming to an end with the second term of James Monroe. Three seasoned members of his cabinet vied for the succession: Secretary of State John Quincy Adams of Massachusetts, Secretary of the Treasury William Harris Crawford of Georgia, and Secretary of War John C. Calhoun of South Carolina. The Life of Percy Lavon Julian '20 February 19, 2009 Born in 1899 in Montgomery, Ala., Percy Lavon Julian was raised by parents who deeply valued education. His mother, Elizabeth, a schoolteacher, and his father, James, first met at the Lincoln Normal School ( now Alabama State University), one of the few places in the state where a black person could continue school beyond the eighth grade.

Jazz music, an African American art form - African American Registry Jazz music, an African American art form The Superior JazzBand, 1910 On this date, we focus on Jazz Music in America and the Black culture's role in creating and influence its existence. History of the United States, Vol. IV : Beard, Charles A., and Beard, Mary R. : Free Download, Borrow, and Streaming LibriVox recording of History of the United States Part IV, The West and Jacksonian Democracy, by Charles A. Beard and Mary R. Beard, read by LibriVox volunteers. Charles Beard was the most influential American historian of the early 20th century. He published hundreds of monographs, textbooks and interpretive studies in both history and political science. He graduated from DePauw University in 1898, where he met and eventually married Mary Ritter Beard, one of the founders of the first Greek-letter society for women, Kappa Alpha Theta.

History Beneath Our Feet Whether you're a long-time resident or an interested newcomer, you've probably looked at certain streets or school names and wondered where they came from. Here's where you can find some answers. History Beneath Our Feet, a project of the Museum of Durham History, is a unique online "Gazetteer" that tells the human side of Durham's compelling past through lively stories and images. Black History in America 1901 Louis Armstrong is born: The Jazz Original "Through his clear, warm sound, unbelievable sense of swing, perfect grasp of harmony, and supremely intelligent and melodic improvisations, he taught us all to play jazz." —Wynton Marsalis Louis Armstrong was one of the most influential artists in the history of music. Born in New Orleans, Louisiana, on August 4, 1901, he began playing the cornet at the age of 13. Armstrong perfected the improvised jazz solo as we know it.

American Imperialism: This Is When It All Began This article is part of The Nation’s 150th Anniversary Special Issue. Download a free PDF of the issue, with articles by James Baldwin, Barbara Ehrenreich, Toni Morrison, Howard Zinn and many more, here. Hawaiian Annexation Editorial (Horace White)Excerpted from the November 25, 1897 Issue The feature of the proposed annexation of Hawaii which ought to excite the most comment and the greatest repugnance has received scarcely any attention, and among the advocates of annexation none at all. Angelou, Maya By Emily HortonNC Government & Heritage Library, 2012. Maya Angelou was best known as a poet and the best-selling author of I Know Why the Caged Bird Sings (1970). Angelou was also a singer, dancer, Grammy-winning composer, director, and actress. She was hailed as an internationally regarded figure for her role as a civil rights leader who fought for social and racial justice.