Search. The Bridge to the Ballot. Tolerance. Voting rights lesson plan. Voting Age: Facts and Resources - NYRA. Advocating for the right to vote isn’t easy, but we’ve put together a list of talking points that you can use whether you are talking to your friends and family or writing a speech to give at your city’s council meeting. 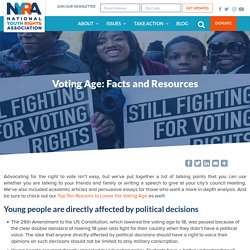 We’ve also included academic articles and persuasive essays for those who want a more in-depth analysis. And be sure to check out our Top Ten Reasons to Lower the Voting Age as well! Young people are directly affected by political decisions The 26th Amendment to the US Constitution, which lowered the voting age to 18, was passed because of the clear double standard of making 18-year-olds fight for their country when they didn’t have a political voice. The idea that anyone directly affected by political decisions should have a right to voice their opinions on such decisions should not be limited to only military conscription.Young people are most directly impacted by education policy.

Young people will turnout to vote Youth voting also increases voter turnout among adults. The Fight for Voting Rights, 50 Years Later. On the 50th anniversary of the March on Washington, the country can take pride in progress made toward the guarantee of equal rights for all. 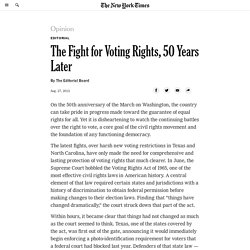 Yet it is disheartening to watch the continuing battles over the right to vote, a core goal of the civil rights movement and the foundation of any functioning democracy. The latest fights, over harsh new voting restrictions in Texas and North Carolina, have only made the need for comprehensive and lasting protection of voting rights that much clearer. In June, the Supreme Court hobbled the Voting Rights Act of 1965, one of the most effective civil rights laws in American history. A central element of that law required certain states and jurisdictions with a history of discrimination to obtain federal permission before making changes to their election laws.

Finding that “things have changed dramatically,” the court struck down that part of the act. Within hours, it became clear that things had not changed as much as the court seemed to think. Episode 104: Voting Rights — Civics 101: A Podcast. NOTE: This transcript was generated using an automated transcription service, and may contain typographical errors. 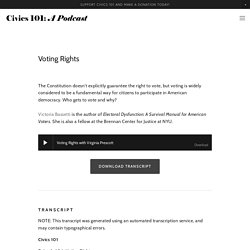 . [00:01:25] Victoria, great to have you with us.   Civil Rights History Project   When Reconstruction ended in 1877, states across the South implemented new laws to restrict the voting rights of African Americans. 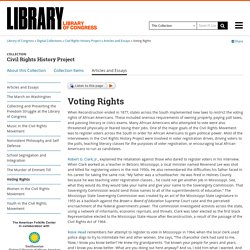 These included onerous requirements of owning property, paying poll taxes, and passing literacy or civics exams. Many African Americans who attempted to vote were also threatened physically or feared losing their jobs. One of the major goals of the Civil Rights Movement was to register voters across the South in order for African Americans to gain political power. Most of the interviewees in the Civil Rights History Project were involved in voter registration drives, driving voters to the polls, teaching literacy classes for the purposes of voter registration, or encouraging local African Americans to run as candidates. Robert G. Rosie Head remembers her attempt to register to vote in Mississippi in 1964, when the local clerk used police dogs to try to intimidate her and other women. The Seattle Public Library. 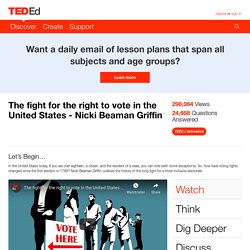 In this humorous talk, Jacob Soboroff shares the history of Election Day and shows how voting on a Tuesday affects voter turnout.You vote, but then what? Discover how your individual vote contributes to the popular vote and your state’s electoral vote in different ways--and see how votes are counted on both state and national levels.Nate Silver has data that answers big questions about race in politics.

For instance, in the 2008 presidential race, did Obama's skin color actually keep him from getting votes in some parts of the country? Stats and myths collide in this fascinating talk that ends with a remarkable insight.Articles I-III of the United States Constitution allow for three separate branches of government (legislative, executive, and judicial), along with a system of checks and balances should any branch get too powerful. Belinda Stutzman breaks down each branch and its constitutionally-entitled powers.