Lesson: A Contested History. Throughout most of the 20th century, US history books, films, and other works of popular culture told a story of Reconstruction which today's historians consider obsolete and incorrect and which was used to justify segregation. 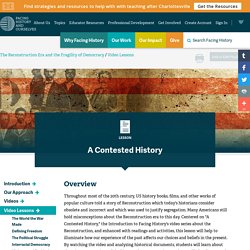 Many Americans still hold misconceptions about the Reconstruction era to this day. 'Why Reconstruction Matters' and 'Black Reconstruction in America' Slavery in the United States. Jenny Bourne, Carleton College Slavery is fundamentally an economic phenomenon. 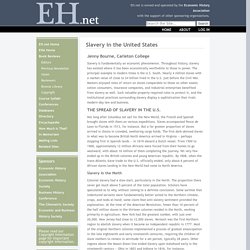 Throughout history, slavery has existed where it has been economically worthwhile to those in power. The principal example in modern times is the U.S. South. Nearly 4 million slaves with a market value of close to $4 billion lived in the U.S. just before the Civil War. The Case for Ending Slavery. Picturinghistory.gc.cuny.edu/lessons_burnsbrown.php. White into Black: Seeing Race, Slavery, and Anti-Slavery in Antebellum America Sarah L. 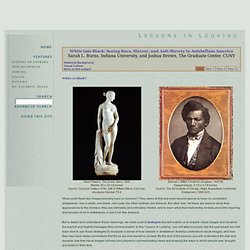 Burns, Indiana University, and Joshua Brown, The Graduate Center, CUNY White or Black? What could these two images possibly have in common? They seem at first and even second glance to have no connection whatsoever: one is white, one black; one nude, the other clothed; one fictional, the other real. Yet there are ways to show that--appearances to the contrary--they are intimately and intricately related, and to learn what that relationship reveals about the meaning and function of art in antebellum or pre-Civil War America. But to detect and understand these meanings, we need a set of strategies that will enable us to unpack visual images and decipher the explicit and implicit messages they communicated. There are a number of ways you can use this "Lesson in Looking. " Depending on the class and its focus, there are other ways to use this resource.

Go to Step 1. The New Jersey Digital Highway - Paul Robeson. In 1947, the American Heritage Foundation prepared a plan to have the original copy of the Declaration of Independence and other significant historical documents tour the United States on a special train entitled the "freedom train. 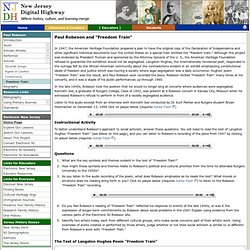 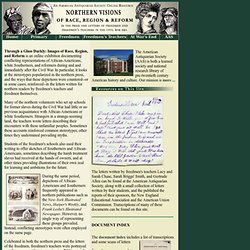 In particular, it looks at the stereotypes popularized in the northern press, and the ways that these depictions were countered--or in some cases, reinforced--in the letters written for northern readers by freedmen's teachers and freedmen themselves. Many of the northern volunteers who set up schools for former slaves during the Civil War had little or no previous acquaintance with African-Americans or white Southerners. Strangers in a strange-seeming land, the teachers wrote letters describing their encounters with these unfamiliar peoples.

Sometimes these accounts reinforced common stereotypes; other times they undermined prevailing myths. Visualizing Emancipation. 19. To Appomattox and Beyond: The End of the War and a Search for Meanings. Watch LOOKING FOR LINCOLN. DISUNION - Opinionator. Freedmen and Southern Society Project - Main Page. Missouri Digital Heritage: Before Dred Scott - An interactive lesson plan. An 1807 Missouri territorial statute said that a person held in wrongful servitude could sue for freedom. 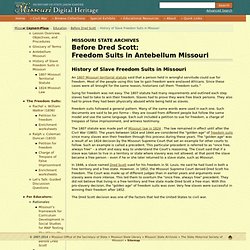 Most of the people using this law to gain freedom were enslaved Africans. Since these cases were all brought for the same reason, historians call them "freedom suits. " Suing for freedom was not easy. The 1807 statute had many requirements and outlined each step slaves had to take to win their freedom. Slaves had to prove they were free black persons. Freedom suits followed a general pattern. The 1807 statute was made part of Missouri law in 1824 . In 1846, a slave named Dred Scott sued for his freedom in St. On Demand - View Playlist. Slavery and the Making of America . Resources . WPA Slave Narratives. 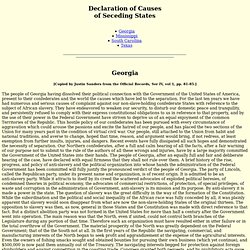 Harpers Ferry and John Brown. The Kansas-Nebraska Act, 1854. Documenting the American South homepage. The Civil Rights Act of 1964 and the Equal Employment Opportunity Commission. Background In the 1960s, Americans who knew only the potential of "equal protection of the laws" expected the president, the Congress, and the courts to fulfill the promise of the 14th Amendment. 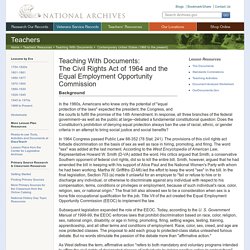 In response, all three branches of the federal government--as well as the public at large--debated a fundamental constitutional question: Does the Constitution's prohibition of denying equal protection always ban the use of racial, ethnic, or gender criteria in an attempt to bring social justice and social benefits? In 1964 Congress passed Public Law 88-352 (78 Stat. 241). The South's Secession Commemoration - The Daily Show with Jon Stewart - 12/09/10.