First Encounters With Race and Racism: Teaching Ideas for Classroom Conversations. This is a guest lesson from Jinnie Spiegler, the director of curriculum at the Anti-Defamation League. She has written for us previously on 10 Ways to Talk to Students About Sensitive Issues in the News. You might choose to use this lesson with our related Student Opinion question, “Why is race so hard to talk about?”

Race and racism are topics that regularly populate our news feeds and affect a wide variety of people in profound ways. But discussions about these topics can be difficult and provoke strong emotions. Racism Is Literally Bad For Your Health : NPR. NPR Choice page. How Much Racism Do You Face in Your Daily Life? Find all our Student Opinion questions here. 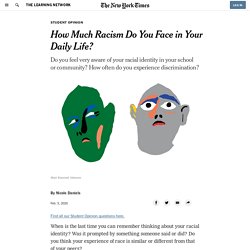 When is the last time you can remember thinking about your racial identity? Was it prompted by something someone said or did? Do you think your experience of race is similar or different from that of your peers? In “How Much Racism Do You Face Every Day?” Amy Harmon writes about the experiences of 101 black teenagers in Washington, D.C., who were surveyed about how much racism they experience on a daily basis: Collectively, the 101 black teens participating in the study reported more than 5,600 experiences of racial discrimination over two weeks.

The article also discusses instances of racial teasing: Racial teasing is common among adolescents and often it is seen as harmless. Ms. Students, read the entire article and answer the quiz questions. As you completed the quiz, how did your responses compare with the study average? Daily multidimensional racial discrimination among Black U.S. American adolescents. Introduction The rise in hate crimes against Black U.S. 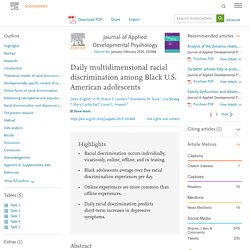 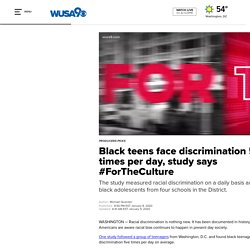 It has been documented in history books, and many Americans are aware racial bias continues to happen in present day society. One study followed a group of teenagers from Washington, D.C. and found black teenagers face racial discrimination five times per day on average. Devin English, an assistant professor at Rutgers School of Public Health, is the lead author in the study titled "Daily multidimensional racial discrimination among Black U.S. American adolescents. "

How Much Racism Do You Face Every Day? People say they regularly see false and misleading content on social media – but also new ideas. Social media use has increased in emerging and developing nations in recent years. 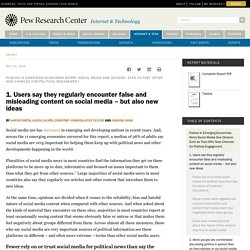 And, across the 11 emerging economies surveyed for this report, a median of 28% of adults say social media are very important for helping them keep up with political news and other developments happening in the world. Pluralities of social media users in most countries find the information they get on these platforms to be more up to date, informative and focused on issues important to them than what they get from other sources. Large majorities of social media users in most countries also say they regularly see articles and other content that introduce them to new ideas.

At the same time, opinions are divided when it comes to the reliability, bias and hateful nature of social media content when compared with other sources. Toolkit for "What Is the 'Alt-Right'?". Kids on Social Media and Gaming. Social Media Apps and Sites Commonly Used by Children and Teens Digital media and apps allow children to communicate and express their creativity, connect with peers, and share their feelings. 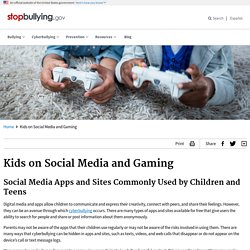 However, they can be an avenue through which cyberbullying occurs. There are many types of apps and sites available for free that give users the ability to search for people and share or post information about them anonymously. Parents may not be aware of the apps that their children use regularly or may not be aware of the risks involved in using them. Parent Guides from ConnectSafely. Inside Facebook, Twitter and Google's AI battle over your social lives. When you sign up for Facebook on your phone, the app isn't just giving you the latest updates and photos from your friends and family. 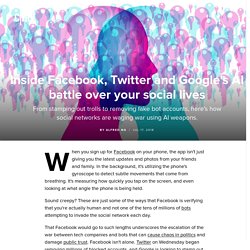 In the background, it's utilizing the phone's gyroscope to detect subtle movements that come from breathing. It's measuring how quickly you tap on the screen, and even looking at what angle the phone is being held. Sound creepy? These are just some of the ways that Facebook is verifying that you're actually human and not one of the tens of millions of bots attempting to invade the social network each day. That Facebook would go to such lengths underscores the escalation of the war between tech companies and bots that can cause chaos in politics and damage public trust. 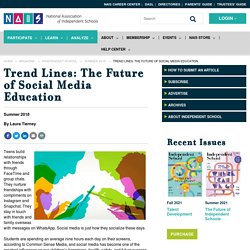 They nurture friendships with compliments on Instagram and Snapchat. They stay in touch with friends and family overseas with messages on WhatsApp. Social media is just how they socialize these days. NetSmartz Tweens. NetSmartz Teens. Teaching Tolerance 57.