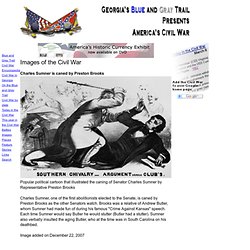 Brooks was a relative of Andrew Butler, whom Sumner had made fun of during his famous "Crime Against Kansas" speech. Each time Sumner would say Butler he would stutter (Butler had a stutter). Image added on:December 22, 2007 Sumner and Brooks. Prisoners. US Policy and Counter Insurgency During the Post Civil War Reconstruction Period. The Post Civil War Reconstruction Era should have leveraged all the powers of national government in order to incorporate the Southern 'fold" back into the national fabric while simultaneously protecting the recently granted constitutional rights of over four million freed slaves. 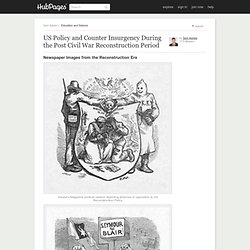 This period was undoubtedly full of potential for prosperity; but unfortunately proved to be just the opposite, an abysmal failure full of false hope, corruption, and violence along racial political lines. This sudden societal shift and economic disparity soon resulted in upheaval. In Memphis, during April 1866, mobs backed by local Memphis police attacked, resulting in over $100,000 in destroyed property, with 30 dead and another 50 wounded.[7] In New Orleans, on July 20, a crowd led by local law enforcement, attacked black republican supporters leaving 38 dead and 146 injured. General Sheridan, responsible for the military district which included New Orleans, telegraphed Grant on August 2, "It was no riot. 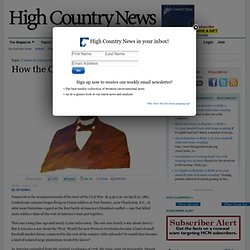 At 4:30 a.m. on April 12, 1861, Confederate cannons began firing on Union soldiers at Fort Sumter, near Charleston, S.C., in what most historians regard as the first battle of America's bloodiest conflict -- one that killed more soldiers than all the rest of America's wars put together. That was a long time ago and nearly 2,000 miles away. The war was clearly a war about slavery. But it was also a war about the West. 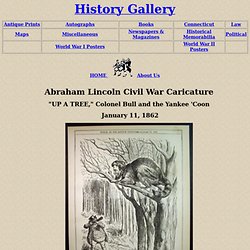 Political Cartoons: During Lincoln's Time. Portraying him as ineffective, Lincoln fires a blunderbuss at a bird labelled “C.S.A.” for the Confederate States of America. 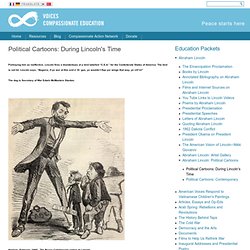 The bird is not hit. Lincoln says, “Begorra, if ye wor at this end o’ th’ gun, ye wouldn’t flap yer wings that way, ye vill’in!” The dog is Secretary of War Edwin McMasters Stanton. Harpers, February, 1865. The Peace Commission comes to Lincoln. An 1860 cartoon lampoons the presidential race between Abraham Lincoln and Stephen Douglas. Just so! Fremont: "Well sir, I am nominated, you see! " Cochrane: "Yes, sir, WE are nomited! " Lincoln: "Well, Gentlemen, what then? " Fremont and Cochrane: Oh! Black Recruit and Abraham Lincoln. "'Treason' at the White House. " Universal Advice: "Drop them! " During the 1864 election, Lincoln dreams of being chased from the White House by Columbia (or Liberty), who is carrying the severed head of a black man. Two sides of Lincoln In “Union and Liberty”, we see Lincoln shaking the hand of a man wearing a paper labor cap. WAP1101600006d5w-764921.jpg (500×742) Abraham Lincoln Political Cartoons.

Political cartoons of President Abraham Lincoln from his 1860 and 1864 elections. 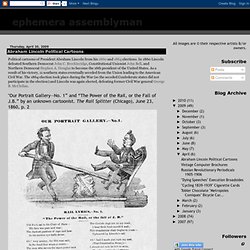 In 1860 Lincoln defeated Southern Democrat John C. Breckinridge, Constitutional Unionist John Bell, and Northern Democrat Stephen A. Douglas to become the 16th president of the United States. As a result of his victory, 11 southern states eventually seceded from the Union leading to the American Civil War. The 1864 election took place during the War (so the seceded Confederate states did not participate in the election) and Lincoln was again elected, defeating former Civil War general George B.

"Our Portrait Gallery—No. 1” and “The Power of the Rail, or the Fall of J.B.” by an unknown cartoonist. In this cartoon from The Rail Splitter, a Republican campaign newspaper published in Chicago, Abraham Lincoln uses his rail and the Constitution as leverage to hoist James Buchanan out of the presidential “chair of state” and into political oblivion. “The Irrepressible Conflict! "Columbia Demands Her Children! " Political Cartoon American Civil War. Tenniel610928a-775562.jpg (631×480)