How to Cool Vancouver's Home Price Fever. Experts find much to be done, with inspiration from abroad and at home. 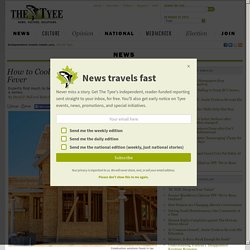 Third in a series. It's no secret that Vancouver has the country's most out-of-reach housing prices. And lately, its mayor and British Columbia's premier have been pointing fingers at one another over who is responsible for fixing it. In fact, a Tyee Solutions Society investigation turned up plenty of things the two could do, some of them right away, to begin to rein in an affordability crisis that threatens the city's future. Housing advocates routinely call for all three levels of government -- municipal, provincial and federal -- to come to the table to find answers to a housing affordability crisis that wears many faces across Canada. That divided jurisdiction provided the backdrop to a recent apparent standoff between Vancouver's Mayor Gregor Robertson and B.C. Clark, who represents the interior B.C. city of Kelowna, has previously expressed concern over Vancouver's housing affordability problem. 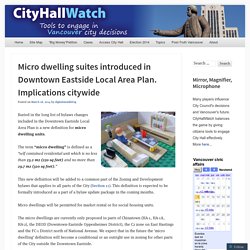 The term “micro dwelling” is defined as a “self contained residential unit which is no less than 23.2 m2 (250 sq feet) and no more than 29.7 m2 (320 sq feet).” This new definition will be added to a common part of the Zoning and Development bylaws that applies to all parts of the City (Section 11). This definition is expected to be formally introduced as a part of a bylaw update package in the coming months. Micro dwellings will be permitted for market rental or for social housing units. The micro dwellings are currently only proposed in parts of Chinatown (HA-1, HA-1A, HA-2), the DEOD (Downtown-Eastside Oppenheimer District), the C2 zone on East Hastings and the FC-1 District north of National Avenue. The definition for micro dwelling is reproduced from final Staff report below: Section 2 – Definitions Add in alphabetical order:

Here's What Really Happened at That Company That Set a $70,000 Minimum Wage. Before Dan Price caused a media firestorm by establishing a $70,000 minimum wage at his Seattle company, Gravity Payments... before Hollywood agents, reality-show producers, and book publishers began throwing elbows for a piece of the hip, 31-year-old entrepreneur with the shoulder-length hair and Brad Pitt looks... before Rush Limbaugh called him a socialist and Harvard Business School professors asked to study his radical experiment in paying workers... an entry-level Gravity employee named Jason Haley got really pissed off at him. 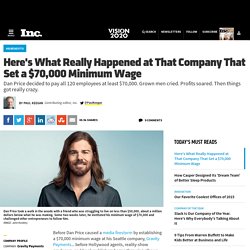 It was late 2011. Haley was a 32-year-old phone tech earning about $35,000 a year, and he was in a sour mood. Price had noticed it, and when he spotted Haley outside on a smoking break, he approached. "Seems like something's bothering you," he said. "What's on your mind? " "You're ripping me off," Haley told him.

Price was taken aback. Price walked away, shocked and hurt. Hitting Pay Dirt Until Price dropped his wage bomb, much of that debate was punditry. University of life: A housing boom puts young people off studying. HOUSING bubbles have a lot to answer for. 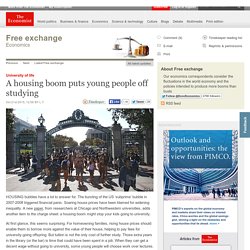 The bursting of the US ‘subprime’ bubble in 2007-2008 triggered financial panic. Soaring house prices have been blamed for widening inequality. A new paper, from researchers at Chicago and Northwestern universities, adds another item to the charge sheet: a housing boom might stop your kids going to university. At first glance, this seems surprising. For homeowning families, rising house prices should enable them to borrow more against the value of their house, helping to pay fees for university-going offspring. The authors argue that this is exactly the choice that many young Americans made in the early noughties. How much of this slowdown can be attributed to the housing boom? All this holds back the skill-level of the workforce, and may contribute to slow productivity growth. Courses: Log in to the site.