Tanzanians capitalise on social media platforms to earn cash. Africa: Tanzania Has Africa's Lowest Mobile Data Cost. By Henry Lyimo Tanzania has the lowest mobile data cost in Africa as it reaps the benefits of the rollout of 4G LTE network by state-owned TTCL and intense competition from numerous operators. 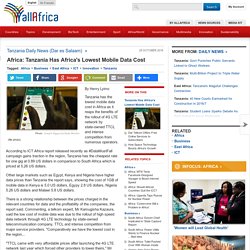 According to ICT Africa report released recently as #DataMustFall campaign gains traction in the region, Tanzania has the cheapest rate for one gig at 0.89 US dollars in comparison to South Africa which is priced at 5.26 US dollars. Other large markets such as Egypt, Kenya and Nigeria have higher data prices than Tanzania the report says, showing the cost of 1GB of mobile data in Kenya is 5.0 US dollars, Egypy 2.8 US dollars, Nigeria 5.26 US dollars and Malawi 5.8 US dollars. There is a strong relationship between the prices charged in the relevant countries for data and the profitability of the companies, the report said. "We enjoy price advantage due to intense competition," he said, adding, however, that the potential for further growth was high because of low service penetration. 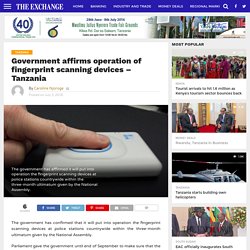 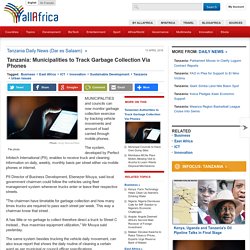 The system, developed by Perfect Infotech International (PII), enables to receive truck and cleaning information on daily, weekly, monthly basis per street either via mobile phones or internet. PII Director of Business Development, Ebenezer Msuya, said local government chairmen could follow the vehicles using fleet management system whenever trucks enter or leave their respective streets. "The chairmen have timetable for garbage collection and how many times trucks are required to pass each street per week. This way a chairman know that street . Tanzania: NEC Data to Be Used to Issue National IDs. By Gadiosa Lamtey Dar es Salaam — The National Identification Authority (Nida) is finalising legal arrangements to start using the National Electoral Commission (NEC) database in registration and issuing national IDs. 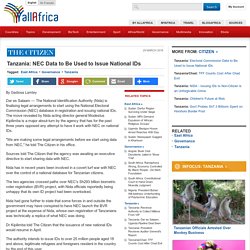 The move revealed by Nida acting director general Modestus Kipilimba is a major about-turn by the agency that has for the past three years opposed any attempt to have it work with NEC on national IDs. "We are making some legal arrangements before we start using data from NEC," he told The Citizen in his office. Sources told The Citizen that the agency was awaiting an executive directive to start sharing data with NEC. Nida has in recent years been involved in a covert turf war with NEC over the control of a national database for Tanzanian citizens.

The two agencies crossed paths over NEC's Sh293 billion biometric voter registration (BVR) project, with Nida officials reportedly being unhappy that its own ID project had been overlooked. Untitled. By Kizito Makoye Dar es Salaam — It's 7:45 in the morning and Zulfa Khalid, a student at Mugabe Secondary School in Dar es Salaam, is stuck at Tegeta bus terminal, sweating in the rising heat having waited more than two hours to get on a bus. 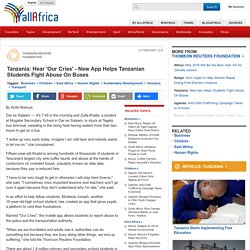 "I woke up very early today, imagine I am still here and nobody wants to let me on," she complained. Fifteen-year-old Khalid is among hundreds of thousands of students in Tanzania's largest city who suffer taunts and abuse at the hands of conductors on crowded buses, popularly known as dala dala, because they pay a reduced fare. "I have to be very tough to get in otherwise I will stay here forever," she said. "I sometimes miss important lessons and teachers won't go over it again because they don't understand why I'm late," she said. In an effort to help fellow students, Modesta Joseph, another 15-year-old high school student, has created an app that gives pupils a platform to vent their frustrations. 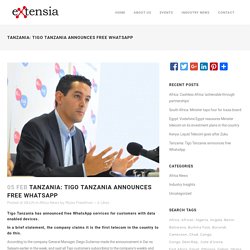 In a brief statement, the company claims it is the first telecom in the country to do this. According to the company General Manager, Diego Gutierrez made the announcement in Dar es Salaam earlier in the week, and said all Tigo customers subscribing to the company’s weekly and monthly internet will be entitled to free WhatsApp service. “From now onwards, all Tigo customers buying any of our weekly or monthly packages will be eligible to enjoy free WhatsApp. This of course, is for customers with data enabled devices. Tigo Tanzania Facebook followers hit 1m mark. 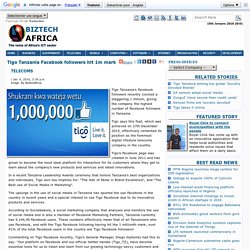 Image: By BiztechAfrica Tigo Tanzania Facebook followers hit 1m mark Tigo Tanzania’s Facebook followers recently clocked a staggering 1 million, giving the company the highest number of Facebook followers in Tanzania. Tigo says this feat, which was achieved on 27th December 2015, effectively cemented its position as the foremost digital lifestyle telecoms company in the country. Tanzania: Alerts on Cholera Now on Phones. By Felix Lazaro Dar es Salaam — About 10 million Tanzanian mobile phone users will have access to life-saving information on cholera, an acute diarrhea disease that can kill within hours if left untreated, thanks to a partnership signed yesterday in Dar es Salaam. 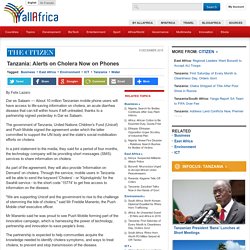 The government of Tanzania, United Nations Children's Fund (Unicef) and Push Mobile signed the agreement under which the latter committed to support the UN body and the state's social mobilisation efforts on cholera. In a joint statement to the media, they said for a period of four months, the technology company will be providing short messages (SMS) services to share information on cholera.

As part of the agreement, they will also provide 'Information on Demand' on cholera. Dar launches e-system for mining licence. INNOVATION: In Tanzania, you can now get your birth certificate by mobile phone - Healthcare - Pulse. Here is a stat that should not be a reality in 21st century Tanzania. 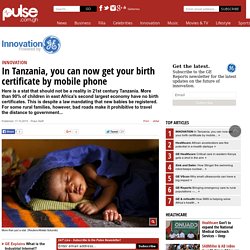 More than 90% of children in east Africa’s second largest economy have no birth certificates. This is despite a law mandating that new babies be registered. For a lot of rural families, however, bad roads makes it prohibitive to travel the distance to government agencies to secure birth certificates. So a lot of families simply forgo the process. Online job portal begins operations in Tanzania. Everjobs launches in Tanzania. 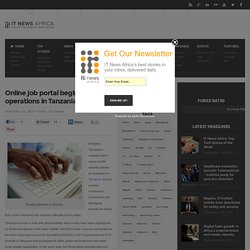 Everjobs, Tanzania’s newest online career portal, recently started its operations in Tanzania. During a press conference, Co-founder and Managing Director for Africa Eric Lauer introduced the company officially to the public. “Everjobs is here to help with employability, which is the main issue highlighted by all the key figures in the labor market” said Eric Lauer.

A survey conducted by the Inter-University Council for East Africa (IUCEA) in 2014 found that over 61% of youth in Tanzania lack employability skills, technical know-how and basic work-related capabilities. In the same year, the World Bank reported that only about 12% of the Tanzanian labor force is mid- and high- skilled. Online booking registration for Tanzania hoteliers. Home. Tanzania to use mobile technology to increase productivity for farmers. About 30 000 farmers of Olam’s coffee, cotton and cocoa in Tanzania stand to benefit from the Connected Farmer Alliance (CFA) agreement that will front the use of mobile technology to increase productivity. The CFA basically constitutes a public-private partnership between Vodafone Group, the US Agency for International Development (USAID) and TechnoServe that will have farmers get farming advice via text message, notifications about upcoming training sessions and events, real-time information about changes in market prices and introduction of mobile money transfer using M-Pesa service in place of cash from December 2014 onwards.

The Daily News Tanzania reports that TechnoServe will provide training for Olam International staff and farmers as well. “In this case, mobile services are being used to enhance farmers’ lives and transform business performance at all points of the agricultural value chain. “Tanzania is a model example of this. Image courtesy of Shutterstock. MaxCom Africa Mobile Payment. M- Pawa Savings Exceeds The Tsh 1Billion Mark.