Gimp Tutorial. Programming. The Globalist. Economic Headaches Await Next UK Government. The unlucky winner of the UK election on May 7 will face three big economic headaches, focusing on a not-so-holy trinity of deficits in the public sector budget, the balance of payments current account and the finances of UK households. 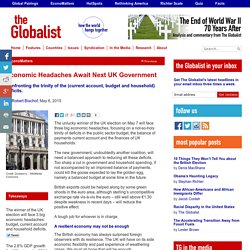 The new government, undoubtedly another coalition, will need a balanced approach to reducing all these deficits. Too sharp a cut in government and household spending, if not accompanied by an improved balance of payments, could kill the goose expected to lay the golden egg, namely a balanced budget at some time in the future. British exports could be helped along by some green shoots in the euro area, although sterling’s uncompetitive exchange rate vis-à-vis the euro – still well above €1.30 despite weakness in recent days – will reduce the positive effect. A tough job for whoever is in charge. A resilient economy may not be enough The British economy has always surprised foreign observers with its resilience. 10 Things They Won’t Tell You about the British Election. 1. 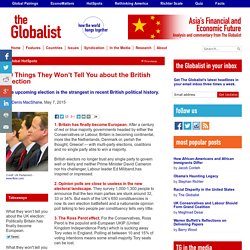 Britain has finally become European. After a century of red or blue majority governments headed by either the Conservatives or Labour, Britain is becoming continental, more like the Netherlands, Denmark or, perish the thought, Greece! –- with multi-party elections, coalitions and no single party able to win a majority. British electors no longer trust any single party to govern well or fairly and neither Prime Minister David Cameron nor his challenger, Labour leader Ed Miliband,has inspired or impressed. 2. 3.

In Scotland, a tartan Ross Perot effect can be seen by the SNP (Scottish Nationalist Party) now expected to win a good number, if not all, Labour seats in Scotland, which will destroy Labour’s hopes of forming a government without help from other parties. 4. The Scottish nationalist leader, Nicola Sturgeon, is incisive, good on TV and sounds radical. 5. Britain is giving up on being a geo-political player. Did New Labour spend too much in government? The blows from the audience made front-page news and hit the Labour leader where it hurts – economic credibility. 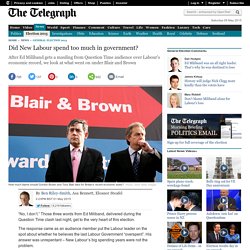 But underpinning the politics lies a genuine question – did Labour overspend while it was in government? Gordon Brown oversaw a boom in public spending – on that the figures are categorical. In the run-up to the 1997 election, as Tony Blair tried to convince the public that New Labour was no longer the tax and spend party that had been stuck in opposition for 18 years, Labour promised to match the Conservatives' budget plans. The move helped convince voters the party could be trusted with the economy and handed him a historic majority. Yet around the millennium Labour – and more specifically Brown, the all-powerful chancellor – switched tact. The stats prove that change approach. Furthermore, New Labour warned against this road. Either way, the growth figures cannot be hidden: in 2008, despite all that public spending, the economy shrunk by almost 5 per cent.

Frances-economic-outlook-downgraded-as-uk-looks-to-overtake-9788878. How did France get it so wrong? While the UK isn’t free of social problems or distrust of political leaders, when it comes to the economy, the contrast with France is striking. 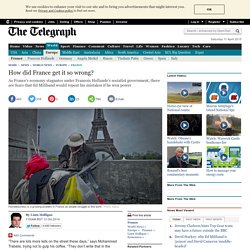 Having grown only 0.3 per cent a year on average since 2008, France will register just a 0.4 per cent expansion this year, according to new International Monetary Fund forecasts. Britain, on the other hand, is due to grow by a buoyant 3.2 per cent. Just 18 months ago, the IMF’s chief economist, Frenchman Olivier Blanchard, accused the UK of “playing with fire”, chiding the Conservatives for trying to rebuild confidence by pursuing tough austerity measures. Last week, he changed his tune, conceding that Britain is “leaving the crisis behind”.

Since President François Hollande entered the Elysée in 2012, France hasn’t managed two successive quarters of economic growth. Stark differences between the UK under a Tory-led Coalition and Hollande’s France have led to comparisons between Ed Miliband and the French President.

UK in or out of the EU