DN! This is a rush transcript. 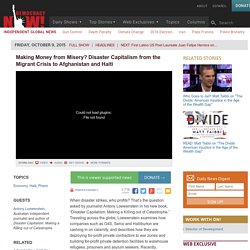 Copy may not be in its final form. AMY GOODMAN: This is Democracy Now! , democracynow.org, The War and Peace Report. Common Space - Divest and reinvest: 6 local governments that are innovating for sustainability. 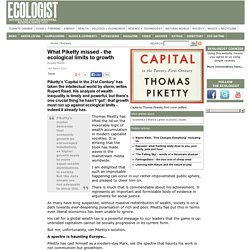 But the data simply are not adequate to show this. Thomas Piketty has lifted the lid on the inexorable logic of wealth accumulation in modern capitalist societies. It is striking that the book has made waves in the mainstream media worldwide. I am delighted that such an improbable happening can occur in our rather-impoverished public sphere, and pleased to cheer him on.

There is much that is commendable about his achievement. As many have long suspected, without massive redistribution of wealth, society is on a path towards ever-deepening polarisation of rich and poor. His call for a global wealth tax is a powerful message to our leaders that the game is up: unbridled capitalism cannot be socially progressive in its current form. But nor, unfortunately, can Piketty's solution. Cristina Fernandez Calls the Vulture Funds 'Economic Terrorists' She said, "terrorists are also those who destabilize a country's economy through speculation. 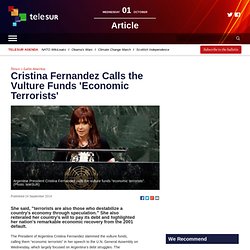 " She also reiterated her country's will to pay its debt and highlighted her nation's remarkable economic recovery from the 2001 default. The President of Argentina Cristina Fernandez slammed the vulture funds, calling them “economic terrorists” in her speech to the U.N. General Assembly on Wednesday, which largely focused on Argentina's debt struggles. The Argentine head of state also highlighted her nation's remarkable economic recovery from the 2001 default, to have the third highest growth between 2004 and 2011. She started by saying that the majority of the problems facing the world today “are due to the lack of effective clear cut democratic multilateralism.” The head of state began by “expressing thanks to this General Assembly ... for creating a multilateral convention which will be a regulatory framework convention to restructure sovereign debts of all countries.”

We Need a New Economic Model. We’ve now had a flavour of the 2015 election campaign, with the Labour conference completed, and the Tories well under way. 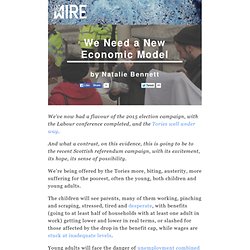 And what a contrast, on this evidence, this is going to be to the recent Scottish referendum campaign, with its excitement, its hope, its sense of possibility. We’re being offered by the Tories more, biting, austerity, more suffering for the poorest, often the young, both children and young adults. The children will see parents, many of them working, pinching and scraping, stressed, tired and desperate, with benefits (going to at least half of households with at least one adult in work) getting lower and lower in real terms, or slashed for those affected by the drop in the benefit cap, while wages are stuck at inadequate levels. Why you have the right to a $5K dividend from Uncle Sam. 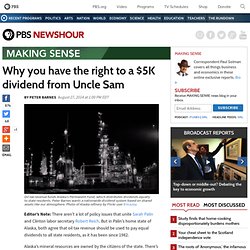 Peter Barnes wants a nationwide dividend system based on shared assets like our atmosphere. Photo of Alaska refinery by Flickr user EricaJoy. Editor’s Note: There aren’t a lot of policy issues that unite Sarah Palin and Clinton labor secretary Robert Reich. But in Palin’s home state of Alaska, both agree that oil tax revenue should be used to pay equal dividends to all state residents, as it has been since 1982.

Alaska’s mineral resources are owned by the citizens of the state. In 2007, Palin signed into law a progressive tax collection structure based on the price of oil. Instead, voters decided to stick with the law passed by current Republican Gov. Silicon Valley Labor Scandals Prove Minimum Wage Hikes Don't Cost Jobs. UK welfare spending: how much does each benefit really cost? Visualised. Benefit spending graphic. 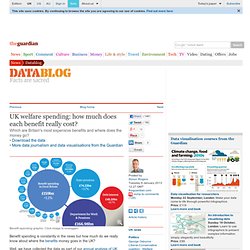 Click image to embiggen Benefit spending is constantly in the news but how much do we really know about where the benefits money goes in the UK? Well, we have collected the data as part of our annual analysis of UK public spending. It shows how benefit spending dominates the UK's budget each year - but it also breaks it down in detail. What it shows is that the Department for Welfare and Pensions is the biggest spending department in the UK - spending £166.98bn in 2011-12, which is Of that huge sum, £159bn was spent on benefits - an increase of 1.1% on the previous year.

Ask people where that money goes and the assumptions might be on unemployment or incapacity benefit. Fair Tax makes its Mark. Starbucks has been made to ‘voluntarily’ increase its contributions to HM Revenue and Customs following customer outrage. pkmk under a Creative Commons Licence 2012 was the year that the world woke up to the inequities of corporate tax avoidance, with the barefaced tax aggression of Starbucks, Amazon, Microsoft and others forcing the issue on to the front pages of the newspapers. 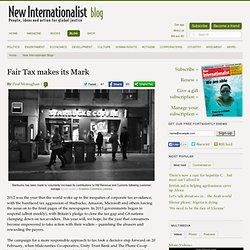