Almost All Of Facebook's 139 Million Users In Africa Are On Mobile. Facebook CEO Mark Zuckerberg in Nigeria, visiting the Co-creation Hub Nigeria (CcHUB) .Facebook Facebook has 139 million users a month in Africa in 2018, 98% of whom connected via mobile. 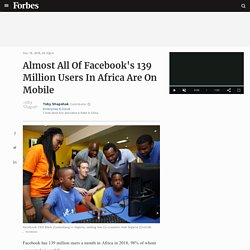 The figures released by the world's largest social media network confirm trends that Africa is a mobile-only continent. Facebook hasn't released figures for a number of years, and hasn't broken down these figures by country nor any other demographic. Africa has a population of 1.1 billion but it is expected to rise to 4 billion by the end of this century.

Africa registry launches gateway solution for domain names in Africa — Business. Africa Registry, part of the CentralNic Group, is a leading provider of domain names for Africa since 2005, is delighted to announce a new programme from its gateway service RRPproxy to empower domain name vendors, registrars and resellers in Africa to sell domains using over 1,000 TLDs, and to benefit from a $50 free credit for all new accounts. 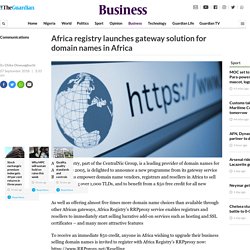 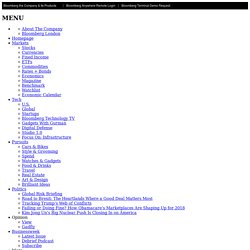 Already the continent’s biggest mobile-phone company by subscribers, Johannesburg-based MTN is adding about 500,000 active banking customers a month, Chief Executive Officer Rob Shuter, 50, said on Wednesday. About 20 million people use MTN’s mobile banking now, he said in an interview at Bloomberg’s office in the South African city. MTN, Vodacom and other competitors are using more affordable and faster internet to offer banking to people in countries where traditional financial services are scarce.

Mobile-money accounts allow users to deposit and withdraw funds via their phones and pay for everything from groceries to haircuts. 'Internet disruptions in sub-sahara Africa cost $237million' - CIPESA [The Morning Call] Africa's Data Centre Sector Experiences a Growth Spurt - 12 Level 3 Facilities As Nigeria's Rack Centre Joins Their Ranks. London — One sign that Africa's data markets are maturing is the rapid increase in the number of Level 3 certified data centres. 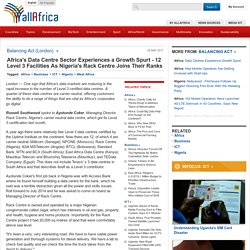 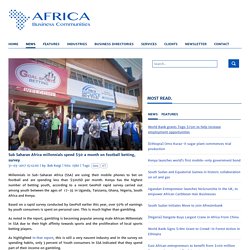 Kenya has the highest number of betting youth, according to a recent GeoPoll rapid survey carried out among youth between the ages of 17-35 in Uganda, Tanzania, Ghana, Nigeria, South Africa and Kenya. Based on a rapid survey conducted by GeoPoll earlier this year, over 50% of earnings by youth consumers is spent on personal care. This is much higher than gambling. Traditional universities are on the way out: online is the future for Africa. Professor Deirdre Carabine, Virtual University of Uganda Education has two faces in today’s world, according to a recent World Bank report. 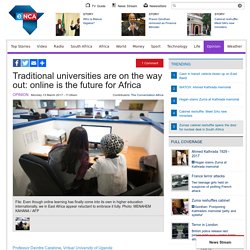 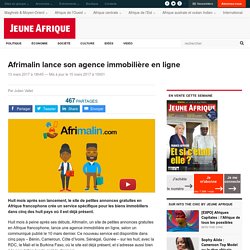 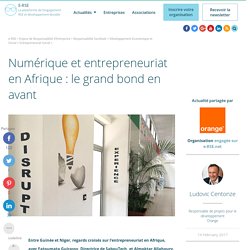 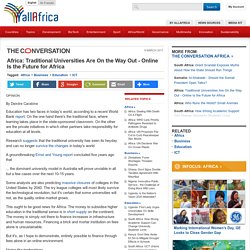 On the one hand there's the traditional face, where learning takes place in the state-sponsored classroom. On the other are the private initiatives in which other partners take responsibility for education at all levels. Research suggests that the traditional university has seen its heyday and can no longer survive the changes in today's world A groundbreaking Ernst and Young report concluded five years ago that. Massive growth predicted for cross-border e-commerce in sub-Saharan Africa. DHL Express has released a report, ‘The 21st Century Spice Trade: A Guide to the Cross-Border E-Commerce Opportunity', which indicates that cross-border online retail volumes are predicted to increase at an annual average rate of 25% between 2015 and 2020 (from $300 billion to $900 billion), twice the pace of domestic e-commerce growth. 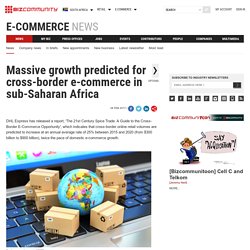 Cross-border e-commerce is considered a growth rocket for sub-Saharan Africa retailers and the report reveals that cross-border e-commerce offers aggregate growth rates not available in most other retail markets. The report looks in detail at the markets and products that offer the highest growth potential, the motivations and preferences of customers making international online purchases and the success factors for online retailers that wish to expand overseas.

Faster shipping options adds rapid growth. NDEMO: How Kenya gave rise to Africa ICT revolution - Opinion and Analysis. Technology startups in Africa are going places. In 2016, they raised funding in excess of $129 million (Sh13 billion), according to the just released Disrupt Africa Report. Kenya, South Africa and Nigeria were the top three beneficiaries of this investor funding. Although the fintech sector received the highest funding, fortunes are changing to agri-tech, which attracted the biggest percentage growth compared to previous years. Africa map of Map of Africa:The Internet Economy-Leaders, Followers, Emergent & Under Performers[2013 Data] by Country. IBM to invest $75 mn to create 25 mn IT skilled workers in Africa. IBM today announced its plans to make an investment of $70 million or approximately ZAR 945 million for building digital, cloud, and cognitive IT skills to support workforce in Africa. The IBM Digital – Nation Africa initiative provides cloud-based learning platform designed to provide free skills development programs for up to 25 million African youths over five years, enabling digital competence in Africa.

The main objective of IBM Digital – Nation Africa program is to increase digital literacy, increase the number of skilled developers to tap into cognitive engines and create entrepreneurs. IBM will deliver cloud-based online learning on IBM Bluemix cloud platform. Advanced IT skills will include social engagement, digital privacy, and cyber protection. IT topics including programming, cybersecurity, data science and agile methodologies, as well as important business skills like critical thinking, innovation, and entrepreneurship will also be focus areas. WaystoCap is bringing Africa’s cross-border trade into the digital era. WaystoCap is an e-commerce firm taking part in the current Y Combinator program.

Wait… “E-commerce, meh, done to death…” I hear you say…. True in part. Yes, in the U.S., Europe, Asia and elsewhere the consumer platforms are already in place. But there remains much more to be done across the world, particularly in markets were internet access is nascent and industries are yet to adapt to digital. African Universal Internet Alliance Expands to 17 nations. President Kagame speaking at 2015 Transform Africa Summit in Kigali In 2013, seven governments meeting in Kigali adopted an ambitious agenda to turn their countries into “smart nations” – making tech and broadband connection a universal right. Today, the alliance’s founding host President Paul Kagame announced the grouping had more than doubled. “Our Alliance started with 7 member countries, and now has 17 countries on board representing a market of about 360 million people,” said Kagame at the Smart Africa board meeting on the sidelines of the 28th African Union Summit in Addis Ababa, Ethiopia.

Membership includes war-torn nations like South Sudan – whose government is still struggling to restore security in the vast nation. Others include Egypt, Kenya, Mali, Senegal, Ivory Coast and Benin. Tanzania and Burundi – both neighbors to Rwanda and belonging to the same bloc – East African Community (EAC), are yet to join the alliance. Africa: The New Normal for Africa in 2017 - 4G Coverage and Higher Speeds Driving New Data Uses. Analysis London — 4G coverage has steadily been replacing 3G coverage in Africa in 2016 and in 2017 it looks likely to be the year higher speeds and better coverage will drive new data uses. Globally 4G provides six times the average speed of 3G. Russell Southwood looks at how things are changing.

In November 2016 OpenSignal published its report on levels of coverage and average speeds of 4G globally. This is based on 500,687 users and 17,065,628,107 sampling points. IT News Africa – Africa's Technology News Leader. United Bank Africa (UBA) has introduced its first merchant-focused app in Africa with the aim of creating a SMART (secure, mobile, accessible, reliable, transparent) network of 100,000 micro merchants and driving financial inclusion.

UBA launch first merchant app in Nigeria and the rest of Africa that will connect 100,000 micro merchants to formal economy by early 2017. The announcement follows the Pan African commitment made by UBA and Mastercard to introduce safer and more convenient ways to pay for goods and services in Nigeria and across the continent. Nigeria has been selected as the first market to go live with the merchant app because of the country’s eagerness to adopt smart tech solutions. TrekBuyFly… Africa’s first social travel app goes live — Sunday Magazine — The Guardian Nigeria. In a bid to ameliorate challenges usually faced by travelers while planning trips within and outside the country, Business Travel Management Limited has developed Africa’s first social travel app, TrekBuyFly. Specifically built for the Nigerian and African market and helps users find the most pocket friendly trips, with student discount options and last moment sales, the app helps users deal with all their travel, rip and group hangout wishes with just one click.

Interestingly, a simple swipe across your phone screen is the answer to all your travel wishes. Speaking about the application, which is now available for download from Google Playstore and the Apple App Store, Lola Adefope, General Manager of Business Travel Management Limited said, “Today’s traveller wants immediate answers. We want to know who’s in town when we arrive, what there is to do? We want to know the coolest places to hang out, the secret bars and see a little of the city too!”

"Mobile money is convenient for many of us who rely on our phones to pay bills and make transactions without having to go to the bank all the time," Kiryowa said. Sandvine Report: Video Share in Africa Has Doubled in Last Year. Africa: MTN Tests Facebook-Designed Voyager to Boost Internet Speed. By Bassey Udo MTN Group announced on Wednesday it emerged the first mobile operator in the world to deploy and test the open optical packet transport platform, Voyager, in telecoms and technology. The telecom infra project (TIP) initiative, launched in February this year, is a global platform that brings together key operators in the telecoms and technology sector to collaborate on the development of new technologies to build and deploy telecom network infrastructure.

Related:  Millions in Nigeria and Kenya Embrace Facebook on Mobile to Share and Connect with Others   -  Education   -  Enterprise