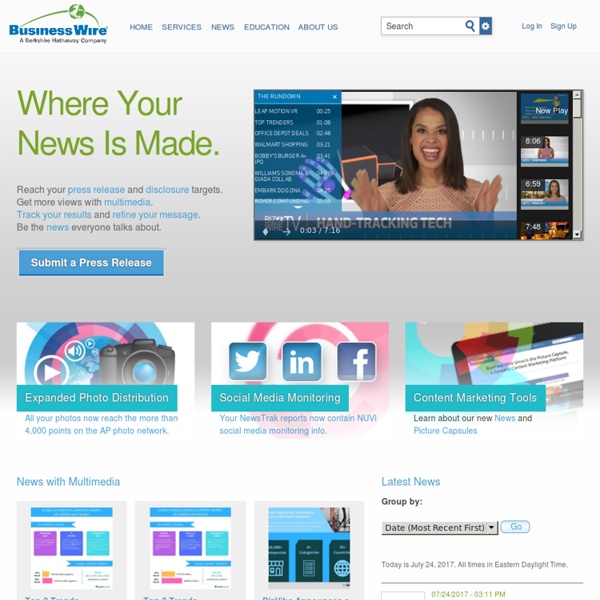 Is the National Best Bid or Offer being Ignored? Executive Summary The NBBO lies at the heart of Regulation NMS (Reg. NMS) and is the key concept that assures investors are getting the best price when buying or selling stocks. However, due to the recent industry trend that emphasizes speed at all costs, the NBBO, in practical terms, no longer exists. A. Theory Outline - Outline of a Multilevel Theory Jan van Dijk Department of Communication, University of Twente, The Netherlands Senior U.S. spies warn of future security threats I think one of the most overlooked parts of Cyber threats is that the encryption we use now is strong but in 20 years it's not going to be. What secrets are you transmitting now and think are safe because the traffic is encrypted? I think some people have secrets from 20 years ago that might still be bad if they got out today. Except that 20 years ago everything wasn't going across the Internet.

Executive PayWatch 2010 I came to the United States from Mexico in 2006, driven by a dream we all share: a better life for my family. What I found, however, is suffering. Fernando is not my real name; I am an undocumented worker and, therefore, I have to protect my identity. I have six children and a wife to support, so I harvest tobacco. Trading bots create extreme events faster than humans can react High-frequency trading is the practice where automated systems search for minor differences in price of stocks that can be exploited for small financial gains. Executed often enough and with a high enough investment, they can lead to serious profits for the investment firms that have the wherewithal to run these systems. The systems trade with minimal human supervision, however, and have been blamed for a number of unusually violent swings that have taken place in the stock market. A new paper has gone searching through historic trading for these sorts of glitches and ended up finding a lot of them—over 18,000—all of which took place too fast for human intervention to have driven them.

Brand Algorithms - Pinformation: Brands on Pinterest Home : Blog : February 2013 February 27, 2013 by Brand Algorithms Pinterest has surprised the social media world by rising to become one of the most popular social media networking sites in a very short period of time. According to totalpinterest.com Pinterest has 25 million+ active users worldwide and another source puts the number of unique visitors at 31.5million+ (compete.com). Pinterest.com is ranked #35 in the world. Social media sites are also seeing a gender split - women use social media more than men. More women are on Facebook and Twitter. About 57% of Facebook and 59% of Twitter users are women.Women more attracted to Pinterest while young techie men hang out on Google+.

A (Relatively Easy To Understand) Primer on Elliptic Curve Cryptography Elliptic Curve Cryptography (ECC) is one of the most powerful but least understood types of cryptography in wide use today. At CloudFlare, we make extensive use of ECC to secure everything from our customers' HTTPS connections to how we pass data between our data centers. Fundamentally, we believe it's important to be able to understand the technology behind any security system in order to trust it. To that end, we looked around to find a good, relatively easy-to-understand primer on ECC in order to share with our users.

Amazon EC2 creators to launch cloud computing start-up Network World - Two members of the team that created Amazon's Elastic Compute Cloud have built a cloud computing start-up called Benguela, which is expected to emerge from stealth mode next week. Benguela,based in Menlo Park, Calif., and Cape Town, South Africa, was founded in 2008 by Amazon veterans Chris Pinkham and Willem van Biljon. Tech Debate: Cloud: Public or private?|Put your crapplications’ into the cloud, experts suggest Between 2001 and 2006 Pinkham was "responsible for IT infrastructure at all Amazon.com data centers, offices and facilities [and] proposed and led development of Amazon EC2," according to his LinkedIn profile.

Business and financial news - CNNMoney.com Ferrari chairman Luca Cordero de Montezemolo explains how his ultimate Italian luxury brand is surviving the eurocrisis. GoogleFinance in Docs fails but JSON saves the day Just a simple Python code snippet to calculate commission on trades on two platforms that I use Lim Tan SCB Would love to see Javascript or other versions of these Usual Disclaimer: The calculations are as I understand and are 'close enough' with the actual amount billed (I think it differs a bit due to how they round some values ;/ anyway you should check with your provider for the commission due please don't blame your trading loss on the scripts provided for your convenience :) Source: #Sample Contract Value vol=1000