Stuff linked with the economy 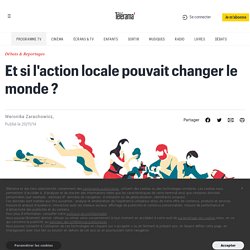 An Atlas of Upward Mobility Shows Paths Out of Poverty. Continue reading the main story Income in adulthood for children whose families moved to a better place The same as kids from the new place Children who moved at age 10 ended up with incomes that were about halfway between the average incomes of kids who spent their entire childhoods in one of the two places. 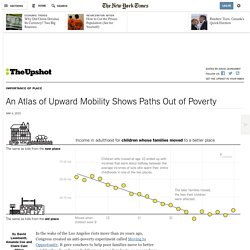 The later families moved, the less their children were affected. 2016 Hopefuls and Wealthy Are Aligned on Inequality. Brits' Top 20 Worries Revealed - The London Economic. Zero-hours contracts 'save UK from eurozone levels of unemployment' Are zero-hours contracts here to stay? In many ways, the growth of zero-hours contracts has symbolised the UK’s labour market since the downturn began: contributing to both stronger than expected employment figures but also rising job insecurity. 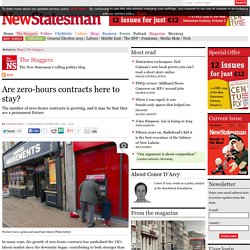 One of the big question marks though has been whether they are solely a symptom of the recession and would start to disappear as the recovery strengthened, or if they are here to stay. New figures released by the ONS today suggest the evidence for the latter just got stronger. Almost 700,000 people in UK have zero-hours contract as main job. Nearly 700,000 people are on zero-hours contracts in their main job - a rise of more than 100,000 on a year ago - according to new official figures. 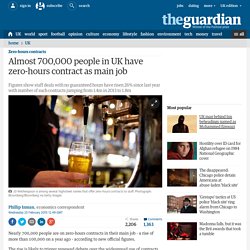 The young are the new poor: Sharp increase in number of under-25s living in poverty, while over-65s are better off than ever. The Joseph Rowntree Foundation (JRF) says as many people in working families as in unemployed ones now live in poverty, after a decade of labour market upheaval which means a job is no longer a guarantee of an end to poverty. 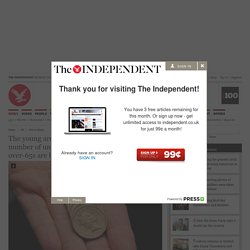 Its annual report says the rise of part-time work and low-paid self-employment has been accompanied by a sharp increase in the number of under-25s living below the breadline as they struggle to cope with falling incomes, poor prospects and high costs from housing to food. A lack of affordable housing also means those living in poverty are now as likely to be in private, usually rented, accommodation – at higher risk of eviction and homelessness – as in local authority or social housing. Some 13 million people in the UK are classified as living in relative poverty – meaning their household income is below 60 per cent of the average. Record numbers of working families in poverty due to low-paid jobs. Insecure, low-paid jobs are leaving record numbers of working families in poverty, with two-thirds of people who found work in the past year taking jobs for less than the living wage, according to the latest annual report from the Joseph Rowntree Foundation. 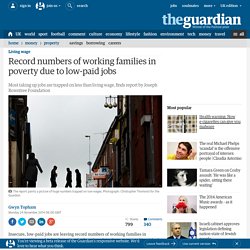 The research shows that over the last decade, increasing numbers of pensioners have become comfortable, but at the same time incomes among the worst-off have dropped almost 10% in real terms. Painting a picture of huge numbers trapped on low wages, the foundation said during the decade only a fifth of low-paid workers managed to move to better paid jobs. The living wage is calculated at £7.85 an hour nationally, or £9.15 in London – much higher than the legally enforceable £6.50 minimum wage. Rental America: Why the poor pay $4,150 for a $1,500 sofa.

Donald Abbott, 35, looks over a receipt from Buddy’s Home Furnishings while his daughter, Savannah, and wife Jamie, rest on the family loveseat. 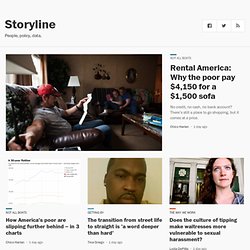 The Abbott family purchased a sofa set from Buddy’s opting to pay for it in weekly installments of $110. (Photo by Bob Miller/For The Washington Post) CULLMAN, Ala. — The love seat and sofa that Jamie Abbott can’t quite afford ended up in her double-wide trailer because of the day earlier this year when she and her family walked into a new store called Buddy’s. Abbott had no access to credit, no bank account and little cash, but here was a place that catered to exactly those kinds of customers. Anything could be hers. Five million British workers earn less than living wage, report reveals - Business News. Shops and restaurants are among the worst offenders, say campaigners, who are expected to call for an increase in the living wage. 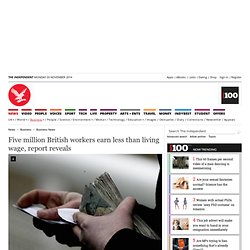 This is £8.80 an hour in London and £7.65 an hour elsewhere; the statutory minimum for those aged over 21 is £6.50. What is the World's Biggest Cash Crop? Yep Cannabis makes serious dough. 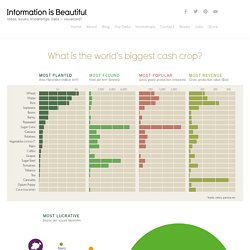 Curious why so many US states – Washington, Oregon, Alaska, Colorado – have decriminalised or even legalized the drug? Because state legislators are getting high on another kind of green. How long before other cash-strapped governments around the world follow suit? We scored some data on yearly harvested area, production weight and wholesale value for the most common food crops from the UN Food and Agriculture Organization, and used it to calculate yield per km2. Then we went sniffing around in various UN World Drug Reports and performed some backroom calculations to cook up some broadly comparable figures for illegal drugs – cocaine, heroin and the mighty marijuana. Capital - Life in a no-vacation nation. Edmund McCombs moved to Sydney six years ago — and has no plans to leave. 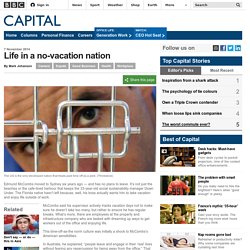 Goldilocks nationalism: The size and homogeneity...